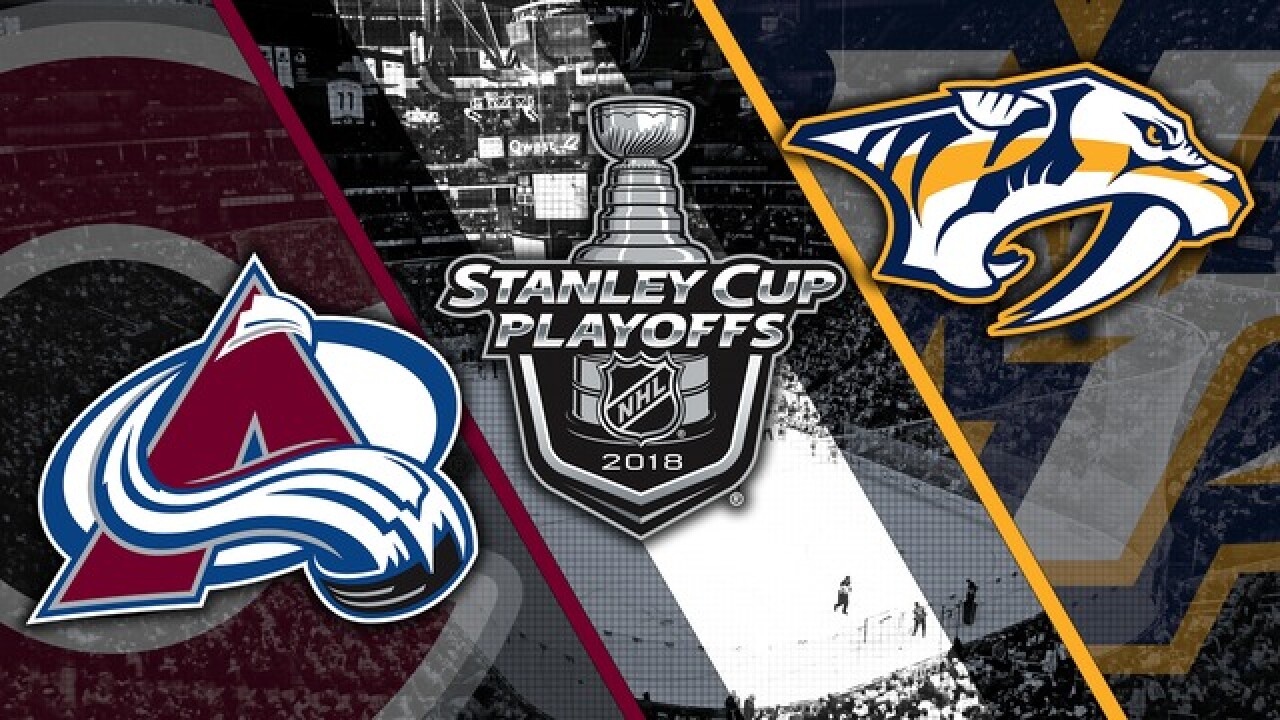 DENVER (AP) -- Nathan MacKinnon scored twice, including one as part of a three-goal first period and another to chase Nashville goaltender Pekka Rinne from the game, and the Colorado Avalanche held off the Predators 5-3 in Game 3 on Monday night to pull to 2-1 in the first-round series.

Blake Comeau and Gabriel Bourque also scored in a furious opening period that revved up a pom-pom waving capacity crowd. Gabriel Landeskog was credited with an empty-net goal for the Avalanche, who snapped a 12-game skid against the Predators.

Game 4 is Wednesday in Denver.

For a third straight game in the series, Colorado scored first. This time, the Avs were able to make it hold up. MacKinnon and his teammates have been a different bunch at home this year. Their 28 home wins in the regular season was tied for the most in franchise history with the 2000-01 squad that hoisted the Stanley Cup.

MacKinnon's goal at 4:25 of the second period gave Colorado a 4-0 lead and prompted the Predators to pull Rinne in favor of backup Juuse Saros. Rinne allowed four goals on 15 shots.

Jonathan Bernier stopped 29 shots on a night when the Avalanche finished 0 for 5 on the power play. Ryan Johansen had a second-period goal and Colton Sissons scored another in the third to make it 4-2. Saros was pulled for an extra skater with around 2:20 left and, moments later, Landeskog was credited with a goal after being dragged down on a breakaway. A sliding Landeskog was trying to get the puck over to MacKinnon.

Austin Watson scored late to make it 5-3 and led to a tense final minute.

Nashville got on the board midway through the second after Colorado was whistled for two penalties on a play, giving the Predators a 5-on-3 advantage. Johansen knocked in a rebound to make it 4-1, but Colorado quelled the other portion of the power play.

Late in the second, P.K. Subban and MacKinnon got tangled up near the corner. It led to some pushing and shoving with both getting holding penalties.

It didn't take long for Colorado to get on the board with Comeau scoring 1:50 into the game and on the team's second shot. Another torrid start as the Avs beat Rinne on their opening shot in each of the first two games.

Shortly after Bourque tipped in Patrik Nemeth's shot, MacKinnon scored with 1:53 remaining in the first when he took a pass from Landeskog, used a burst of speed to get free and beat Rinne with a wrist shot. MacKinnon led the league in home scoring in the regular season with 67 points.

The last time the Avalanche played at the Pepsi Center it was also desperation time. They beat St. Louis in a winner-gets-into-the-playoffs season finale.

NOTES: Nashville LW Viktor Arvidsson nearly had a goal in the first when he and the puck crashed into Bernier at the same time. The puck slid in, but the officials waved off the goal due to goaltender interference. ... A Nashville fan threw a catfish onto the ice. ... Avs D Samuel Girard missed a second straight game with an upper-body injury. ... D Nikita Zadorov celebrated his 23rd birthday. ... Broncos LB Von Miller showed up wearing a No. 58 Avalanche jersey.