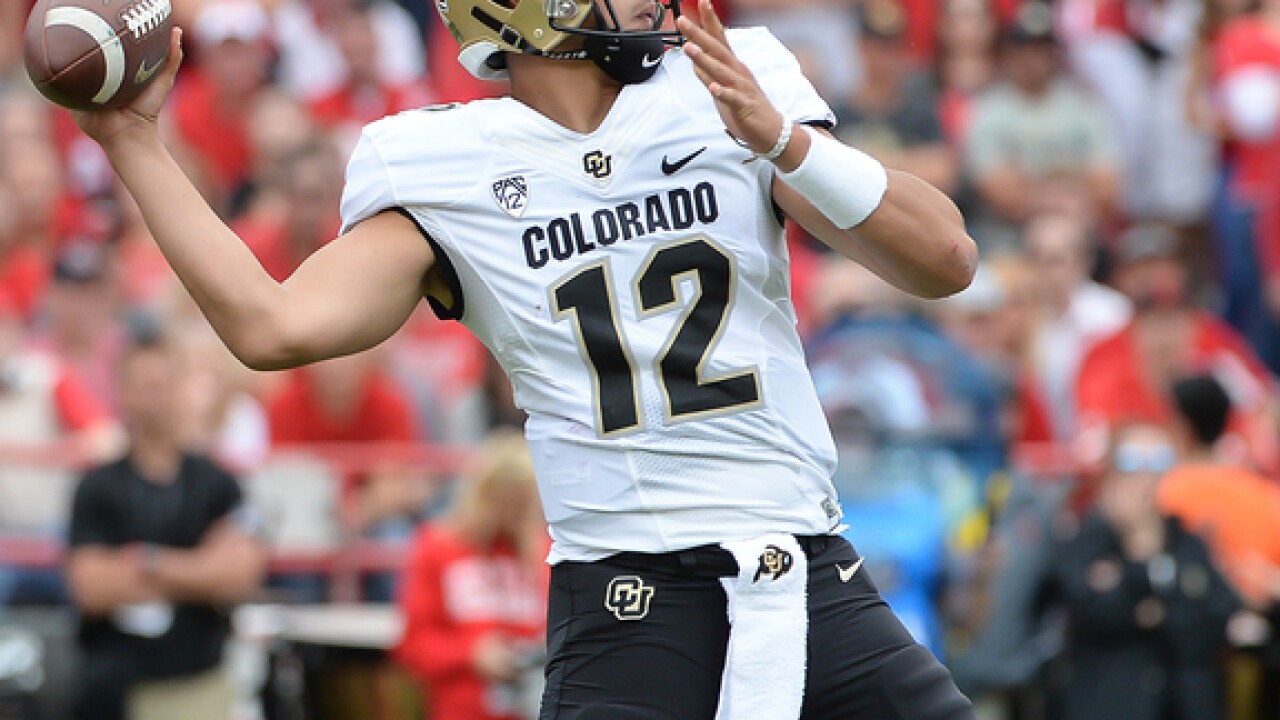 Copyright 2018 Scripps Media, Inc. All rights reserved. This material may not be published, broadcast, rewritten, or redistributed.
Steven Branscombe
<p>LINCOLN, NE - SEPTEMBER 08: Quarterback Steven Montez #12 of the Colorado Buffaloes passes in the first half against the Nebraska Cornhuskers at Memorial Stadium on September 8, 2018 in Lincoln, Nebraska. (Photo by Steven Branscombe/Getty Images)</p>

LINCOLN, Neb. (AP) — Steven Montez connected with Laviska Shenault Jr. for a 40-yard touchdown with 1:06 to play and Colorado’s defense held at the end, allowing the Buffaloes to beat Nebraska 33-28 on Saturday and spoil Scott Frost’s debut as the Cornhuskers’ coach.

There was no lack of drama in the teams’ first meeting since 2010, the last season in the Big 12 for both.

Colorado got the ball for the last time with 2:23 left after Nebraska quarterback Adrian Martinez went out of the game because of an injury.

Montez moved the Buffaloes from their 23 to the Nebraska 41 before Ben Stille sacked him to set up a third-and-19 that became third and 24 after a false start. Montez overthrew Jay MacIntyre over the middle, but safety Aaron Williams was called for a personal foul for hitting the defenseless MacIntyre.

Given new life, Montez hit Shenault along the right sideline for the go-ahead score.

Sophomore walk-on Andrew Bunch, who took over for Martinez, moved the Huskers to the CU 21, but JD Spielman couldn’t come down with the ball in the end zone on the game’s final play.

Martinez, the first Nebraska true freshman to start at quarterback in an opener, ran for 117 yards and two touchdowns and passed for 187 yards and another score. Martinez was injured on a short run with 3:29 left and had to be helped off the field.

Nebraska committed turnovers on its first two possessions, and Colorado capitalized for a 14-0 lead.

The Huskers led 21-17 at half and were up 28-20 in the third before the Buffaloes stormed back.

Montez passed 8 yards to MacIntyre for a touchdown that pulled the Buffs to 28-27. After missing two field goals that would have given them the lead, the Buffaloes got the ball back for the winning touchdown.

Colorado: Montez continues to stamp himself as one of the premier quarterbacks in the Pac-12, making play after play on a day when the running game couldn’t gain traction.

Nebraska: Martinez had a splendid debut before getting hurt, and the defense looks much better than the unit that ranked among the worst in the nation last year. The Huskers had seven sacks after having only 14 last season.

Nebraska hosts Troy, which visits Lincoln for the fifth time in 18 years.