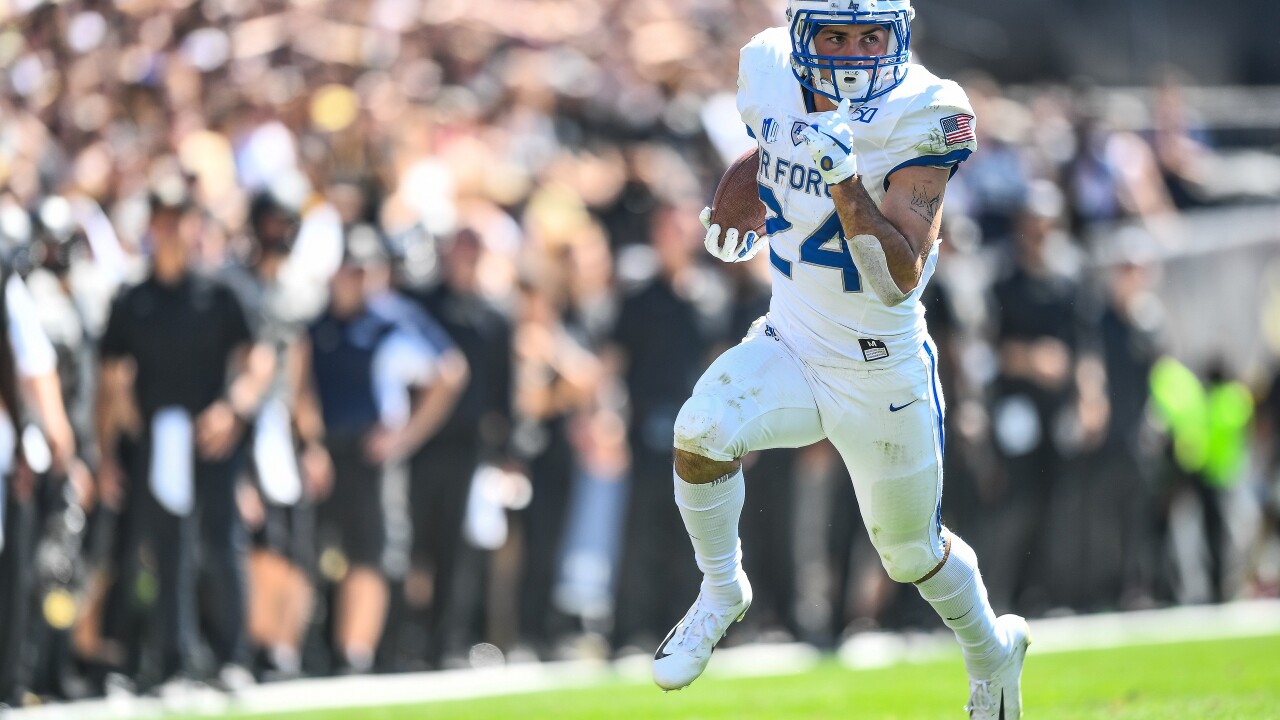 BOULDER, Colo. (AP) — The game began with an Air Force fly-over and was decided by a flying leap.

Both made plenty of noise.

Kadin Remsberg scored on a 25-yard run to start overtime Saturday and Air Force beat Colorado 30-23 after squandering a 13-point lead in the fourth quarter.

"People know us as hard workers and it's true," Remsberg said. "We're going to get the work in. We are going to work our craft and we are going to come out and beat people."

He finished it off in style, by diving in for the go-ahead score.

The Falcons defense went to work and on fourth down forced Steven Montez to throw wide to Laviska Shenault Jr. in the corner of the end zone. The Falcons (2-0) stormed the field in the first meeting between the schools since 1974.

"We want to be the kings of Colorado," said Remsberg, whose team plays at Colorado State on Nov. 16. "That's how we look at it."

The Falcons rushed for 289 yards and overcame three turnovers to snap a five-game skid against the Buffaloes (2-1). It's their first win over Colorado since Nov. 23, 1968, at Folsom Field.

It was another furious finish for the Buffaloes, who trailed 23-10 with 10:23 remaining. The Buffaloes came back from a 17-point deficit to beat Nebraska 34-31 in OT a week ago in Boulder. This marked the first time in Colorado history the team has played in back-to-back overtimes.

Running out of the wildcat formation, Shenault took a direct snap and twisted his way into the end zone from 2 yards out with 28 seconds remaining. James Stefanou's extra point tied it at 23.

This after Steven Montez found Dimitri Stanley for a 13-yard TD with 6:09 left. But the extra point by Stefanou was blocked, making it 23-16. That snapped a string of 107 straight extra-points made.

After Air Force went three-and-out — the Falcons had two false-start penalties — the Buffaloes methodically drove it down the field to tie the game.

Hammond threw for two TDs and ran for another as the Falcons offense kept the Buffaloes guessing most of the afternoon. Air Force set the tone with a throw on its first play. Then, the team effectively mixed the throw (Hammond was 7 of 12 for 155 yards) and the run (the team averaged 5.6 yards per carry). They also dominated time of possession 34:04 to 25:56 in a game the Falcons had two weeks to prepare. They had a bye week after beating Colgate 48-7 on Aug. 31.

"They'll just run you to sleep and then they'll hit you with the pass," Colorado linebacker Akil Jones explained. "It's just Air Force."

The Falcons proved to be the only one who could really stop themselves, punting just twice. Taven Birdow and Remsberg fumbled, while Hammond had a pass in the closing minute of the first half bounce off Birdow and intercepted by safety Mikial Onu in the end zone to keep it 20-10 Air Force heading into the locker room.

Montez threw an early strike to Shenault , but then banged up his right hand in the first half. He wore tape near his wrist and finished with 220 yards passing, two TDs and an interception.

Colorado: Once again, the Buffaloes fell behind. This time, they couldn't rally. "If you don't execute, it will catch up to you," Tucker said.

Colorado safety Aaron Maddox was carted off in the third quarter with a left leg laceration after he crashed into a cooling fan on the Air Force sideline. He could be back mid-to-late season.

"You hate to see that happen to a guy like that, that loves football that much, that cares about his team that much," Onu said.

Hammond's 81-yard TD strike to Ben Waters in the second quarter ties the fourth-longest in school history. It was also the eighth-longest pass play surrendered by Colorado.

Colorado: At Arizona State on Saturday to open Pac-12 play.