Famed 10th Mountain Division veterans to be honored at 2018 BolderBOULDER

BOULDER, Colo. – The 10th Mountain Division has one of the most colorful histories in the U.S. Army.

The division was the first U.S. Army unit created specifically to operate in the mountains and its first members were trained at Camp Hale near Leadville during World War II. The division is being honored this year during the Memorial Day Tribute at the end of the BolderBOULDER.

“We had the D-Series,” veteran Hugh Evans remembers. “A six-week period of being out with no fires, sleeping in the snow, moving all day from sunrise to sunset around the hills up at Leadville and Camp Hale.”

Evans and Dick Over were just teenagers when they trained at Camp Hail in the 1940s. Over remembers the clothing they were given during their training.

“It was fur lined jackets and high boots, hiking boots,” he said. “That’s the first time I handled a heavy weapon.”

The men say those in the division that didn't know how to ski before they came to Colorado quickly learned, but they didn’t have the benefit of things we take for granted today, like ski bindings.

“We cut out big heavy rubber bands from automobile innertubes,” Over remembers. “Those would be threaded into the toe strap and that’s what we learned on.”

More than 28,000 soldiers trained at Camp Hale during World War II. Many, like Evans’ platoon sergeant, would die in combat. It’s those men and women that are being honored at the Memorial Day Tribute at this year’s BolderBOULDER.

”Memorial Day means what it was set out for, remember and thank those men who served this country, particularly those who didn’t make it who gave their last for the United States and Freedom,” Evan said. 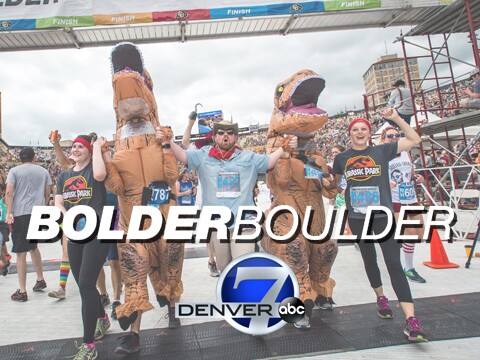