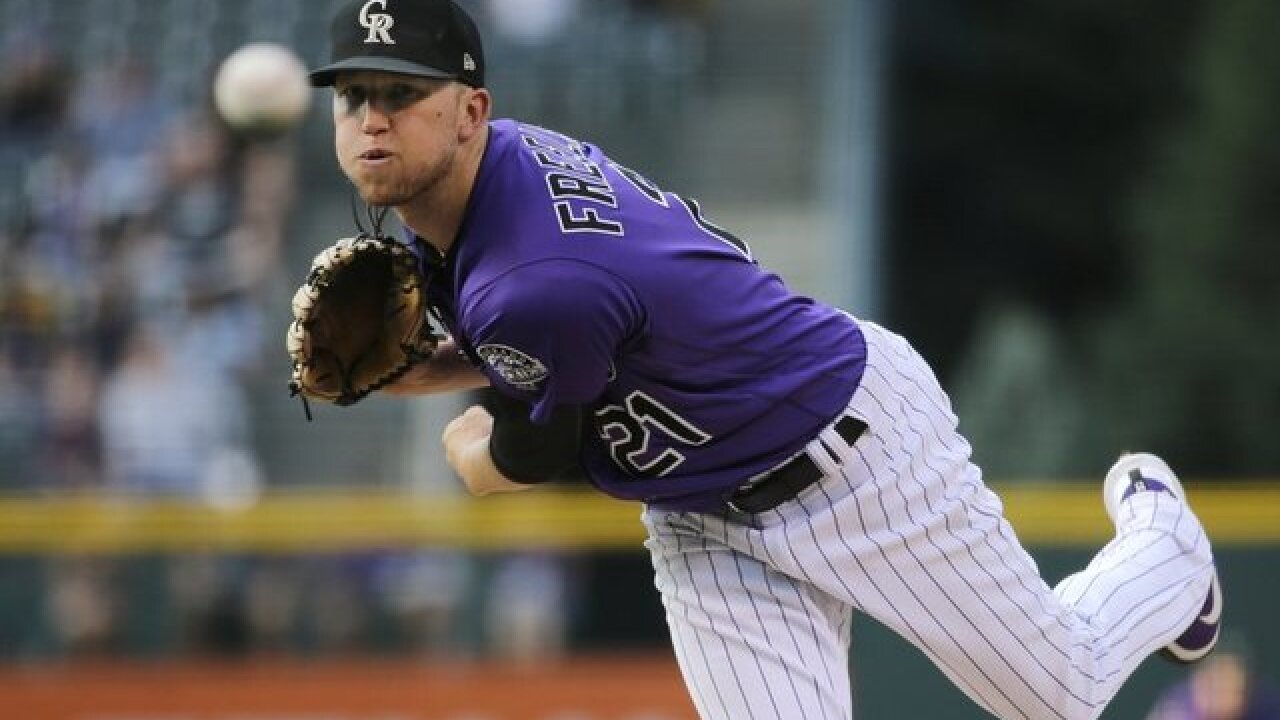 DENVER (AP) — Kyle Freeland and the Colorado bullpen combined on a two-hitter to help the Rockies beat the Pittsburgh Pirates 2-0 on Monday night in a game that was interrupted 32 minutes by rain.

Freeland (10-7) allowed two hits and struck out five over seven stellar innings. Relievers Seunghwan Oh and Wade Davis combined to close out the win. Davis pitched a perfect ninth for his 32nd save in 38 chances.

It was a positive step for a beleaguered bullpen that endured three walk-off losses — two by Davis — during a 2-5 road swing.

Joe Musgrove (4-6) retired the first 12 batters he faced before allowing a single to Nolan Arenado on the first pitch of the fifth. The right-hander scattered four hits over seven innings and allowed two runs, one earned.

Colorado scored both of its runs off Musgrove in the fifth. Arenado raced home with the first when Josh Harrison booted Gerardo Parra’s grounder. Just then, the rain picked up intensity and the grounds crew brought out the tarp.

After the delay, Musgrove hit Ian Desmond to load the bases and Chris Iannetta followed with a sacrifice fly to bring in another run. The damage could’ve been more if not for right fielder Gregory Polanco throwing out Parra trying to score from second on David Dahl’s single.

Freeland allowed a single to Corey Dickerson to lead off the game and Musgrove’s double in the third. Other than that, Freeland was tough to solve against a Pirates team that scored five runs off him in four innings on April 18.

The left-handed Freeland got into a bit of a bind in the seventh after hitting Francisco Cervelli and walking Harrison. Jordy Mercer lined out to end the threat.

The wind picked up intensity and the temperature dropped about 14 degrees, making it hard for the baseball to leave the ball park. David Freese hit a deep drive to center in the fourth and Starling Marte another in the sixth that got held up by the breeze.

Rockies: RHP Antonio Senzatela (shoulder inflammation) will rest a few days before playing catch. “He feels good. We’re optimistic there,” manager Bud Black said. ... OF Charlie Blackmon was given a day off.

The Rockies were relatively quiet at the trade deadline. Arenado didn’t take the bait when asked if they needed to do more to contend in the NL West.

“I only know how to play third base and bat third or fourth or wherever they want me in the lineup,” Arenado said. “That’s the only thing I know.”

The Rockies will bring RHP Chad Bettis (5-1, 5.10 ERA) off the disabled list to start Tuesday against the Pirates. Bettis hasn’t pitched for Colorado since July 1 due to a blister on his middle finger. Pittsburgh will throw RHP Jameson Taillon (8-8, 3.74), who’s been charged with three runs or less in each of his last 12 starts.

Both pitchers dealt with  testicular cancer  a season ago.

“Both healthy. Both in the big leagues,” Taillon said. “Life’s good.”