11 new items are coming to Coors Field this year 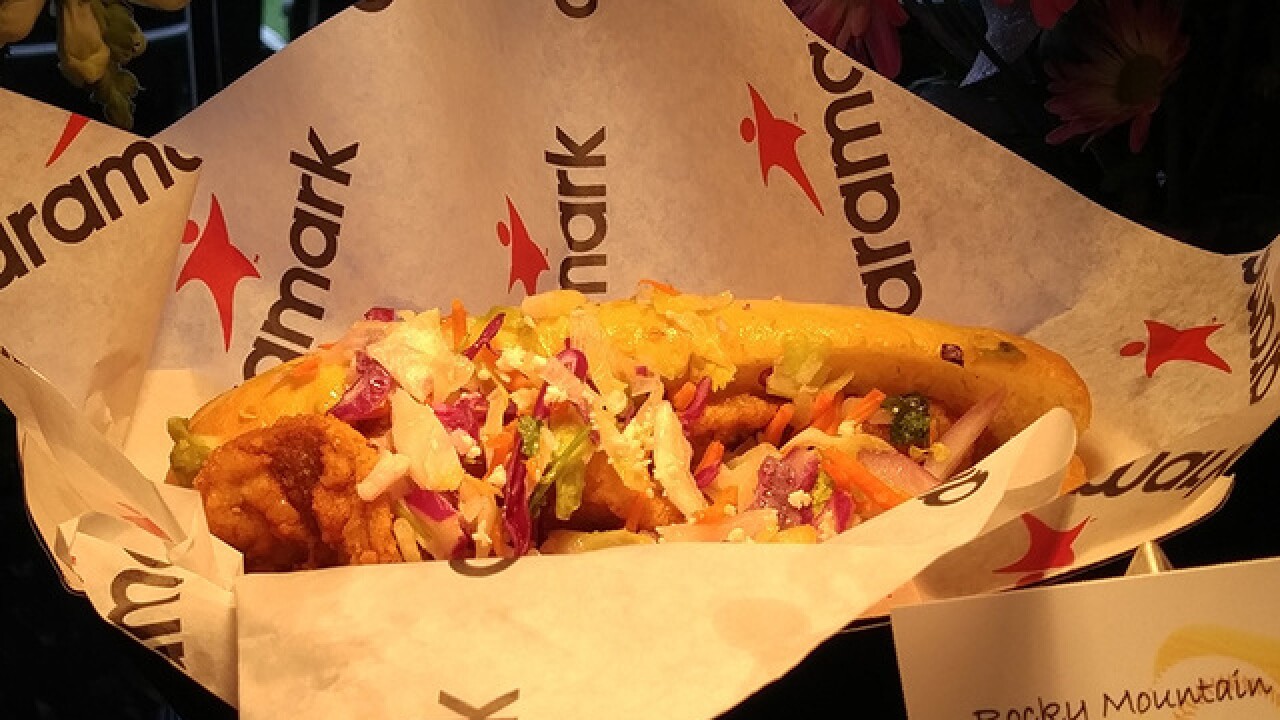 Copyright 2018 Scripps Media, Inc. All rights reserved. This material may not be published, broadcast, rewritten, or redistributed.
<p>Anyone who claims to be from Colorado knows what a Rocky Mountain Oyster is (hint: they’re not oysters at all). If you’re feeling like you want to go all out on Opening Day, this Po’Boy might just be for you. The dish is loaded with garlic slaw, green chili ranch, guacamole, cojita cheese and pico de gallo all on a po’boy roll.</p>

DENVER – If you have an experimental palate, then this season’s food options at Coors Field will not disappoint, especially when you consider that at least one of these has the top ranking in a list of the craziest ballpark foods for the 2018 MLB season.

For their 25th season, Coors Field is making sure you know where you’re eating, which is why a bunch of this year’s eats have a recurring theme: the color purple.

The beer, a lager made from European-American hops, comes directly from a microbrewery housed at Coors Field, according to Brian Arp, the general manager of Aramark, the vendor who provides food at the ballpark.

But for those who want something a little sweeter, you can try the 25th anniversary cocktail, an alcoholic infusion made from Smirnoff vodka, blue curacao, lemonade, lime juice and grenadine.

If you’re here for the food though, there are eleven new surprises for the 2018 season – one of which is not easy to stomach (but believe us, we tried it and definitely recommend it).

The Chicken and Purple Slaw Taco Trio, a new concept on the taco according to Arp, is of course, made up of flour tortillas (otherwise it wouldn’t be a taco - believe me, I grew up in Mexico) and features chicken topped with salsa verde and purple slaw. You’ll be able to find the taco trio in the Captain’s Deck.

If you’re looking for something a bit more traditional for the ballpark, then you might want to go for the Braised Short Rib Nachos. This is a build-your-own toppings food item only at the suites, according to Arp. It includes jalapenos and is topped with a variety of the traditional pico de gallo salsa along with purple coleslaw.

Available in the Mountain Ranch Club, the Rockies Triple Berry Fritters are topped with a sweet rum glaze sauce and silver sprinkles (or “pearls” as Arp called them), to make it “uniquely Rockies.” Order them and you’ll see why it's a unique dish.

What would a ballpark be without mac and cheese? Certainly not a ballpark at all! The Mile High Mac and Cheese is what you would expect, but in order to be considered “Mile High,” the creators behind the meal added green chili, chorizo and pico de gallo to the dish to make it truly Colorado.

A hotdog bun filled with pulled pork, bacon bits and purple slaw might just be the perfect twist on America’s favorite ballpark food.

The name might be confusing, but fear not – it’s not just a salad. The Chicken Salad Sandwich is filled with chicken (duh), lettuce, tomato and bacon – all under the comforting texture of a croissant.

This is perhaps my favorite new food at Coors Field this season. It’s not really a taco, but it’s also not really a club. Confused yet? So was I, but once I took a bite I honestly could not go back. Seasoned ground beef, cheese, lettuce, tomatoes, fried jalapenos and avocado sour cream on a roll is what your taste buds will experience when taking that sweet, fulfilling first taste.

Do you really need an explanation of what a Colorado Lamb Burger is? We didn’t think so – but the dish does look very appetizing, so if you’re not up for the Triple Play Dog, perhaps this should be your Plan B.

Anyone who claims to be from Colorado knows what a Rocky Mountain Oyster is (hint: they’re not oysters at all). If you’re feeling like you want to go all out on Opening Day, this Po’Boy might just be for you. The dish is loaded with garlic slaw, green chili ranch, guacamole, cojita cheese and pico de gallo all on a po’boy roll.

If you think this item is bizarre, you’re not alone. It took the No. 1 spot on USA Today’s list of the 10 craziest ballpark foods for the 2018 season.

Stomach full? No problem! Coors Field is also offering two new dessert options this year: Banana pudding and purple yogurt. Both promise to leave you satisfied as the Colorado Rockies take on the Atlanta Braves starting at 2:10 p.m.

GALLERY: See the new food coming to Coors Field in 2018