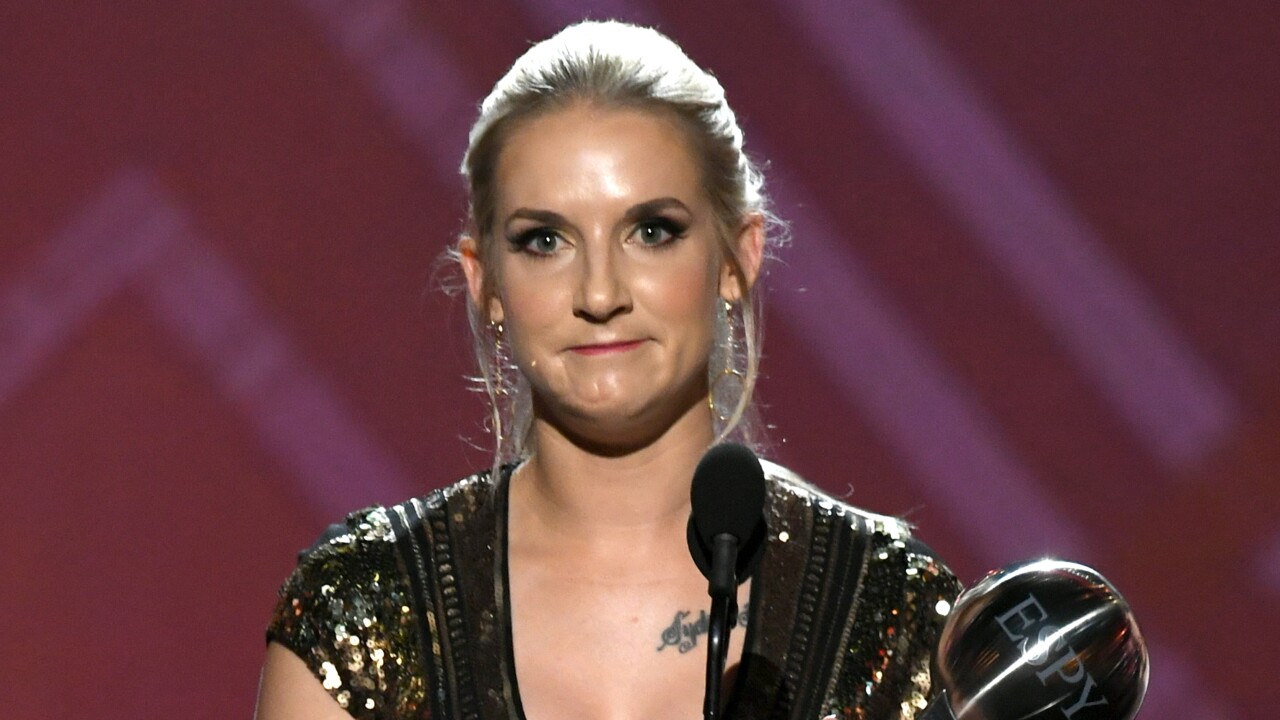 LOS ANGELES (AP) — Kristie Ennis of Glenwood Springs was honored at the 2019 ESPYS with the Pat Tillman Award Wednesday evening.

Ennis is a former Marine sergeant. While on duty in Afghanistan, she was in a crash that resulted in traumatic injuries and ultimately led to an above-knee amputation of her left leg. She is trying to become the first woman above-the-knee amputee to summit all seven of the world's highest peaks.

Former Marine Corps Sergeant @KirstieEnnis was injured in a helicopter crash serving in Afghanistan in 2012.

Her achievements and dedication to serving others are why she's won the Pat Tillman Service Award.

According to Good Morning America, after years of struggling through recovery, Ennis decided she wanted to be a beacon of hope.

"I am often told that I am strong, but truth to be told I'm not the strong one," she said as she accepted the award. "It has taken me a village to get here."

On stage, she thanked her parents and sister for sticking by her side.

The U.S. women's national soccer team flew to the West Coast after celebrating its Women's World Cup victory. Alex Morgan won female athlete of the year and shared the best team award with her soccer mates.

"Sorry, but this is probably the second-best trophy we won this week," Morgan said jokingly, hoisting her individual trophy.

As she got up from the front row, Megan Rapinoe's black tuxedo jacket opened and exposed her left breast, which was caught by cameras showing the in-house feed of the show. It wasn't immediately known whether it went out over the live national telecast.

"I've dropped the F-bomb on every stage the last four days, so we'll just spare you that," Rapinoe told the audience.

Giannis Antetokounmpo of the Milwaukee Bucks won male athlete of the year at the show honoring the past year's top athletes and moments in sports.

"This is all about hard work. When you believe in your dreams this can happen," Antetokounmpo said. "Hopefully, if I keep working hard there's more to come."

"When the World Cup is behind us, it is the professional league that we need to continually lift up and grow," she said. "Investment in women and girls should not only occur on the playing fields but in more storytelling of badass, amazing women who continue to show that we are more than just athletes."

The U.S. women's team is suing to receive pay equal to their male counterparts.

"Keep fighting for equality," Billie Jean King told the team from the stage earlier in the show.

Carli Lloyd informed the crowd the team had its hair and makeup done during the flight from New York.

"We look pretty fabulous, I think," she said.

Lloyd added, "It's been an incredible journey. Here's to the next World Cup."

Other athletes acknowledged the Women's World Cup victory from the stage, including Drew Brees, winner for best record-breaking performance.

"It's going to be in history forever," new New Orleans Pelicans player Lonzo Ball said on the red carpet. "I don't even watch soccer and I watched it. That means a lot."

"Wish I could have stayed a second year, but I had other things to do," a smiling Williamson said.

Ohashi accepted her best play trophy by giving her remarks in rhyme.

The St. Louis Blues earned best comeback for going from worst team in the NHL early in the season to the Stanley Cup championship. Center Ryan O'Reilly removed his tooth to thank the crowd.

— Bill Russell, Arthur Ashe Award for Courage. The 85-year-old basketball Hall of Famer was saluted for his dedication to fighting for social justice and ensuring opportunity for all young people. Introduced by Kobe Bryant, Russell acknowledged a standing ovation from an upper level box but didn't speak.

— Rob Mendez, Jimmy V Award for Perseverance. The high school football coach was born without arms or legs due to a rare disorder. Mendez taught himself football fundamentals using video games. He is head coach of the junior varsity team at Prospect High in Saratoga, California. They went 8-2 in his first season and reached the league title game.

"I also want to thank the game of football for all that it's given me, for allowing me to be part of a team," Mendez said from motorized chair. "Look at me and see how much passion I put into coaching and how far it's gotten me. I made it this far and who says I can't go further?"