Initiative stems from discussions this summer, during player-led meeting after Jacob Blake shooting 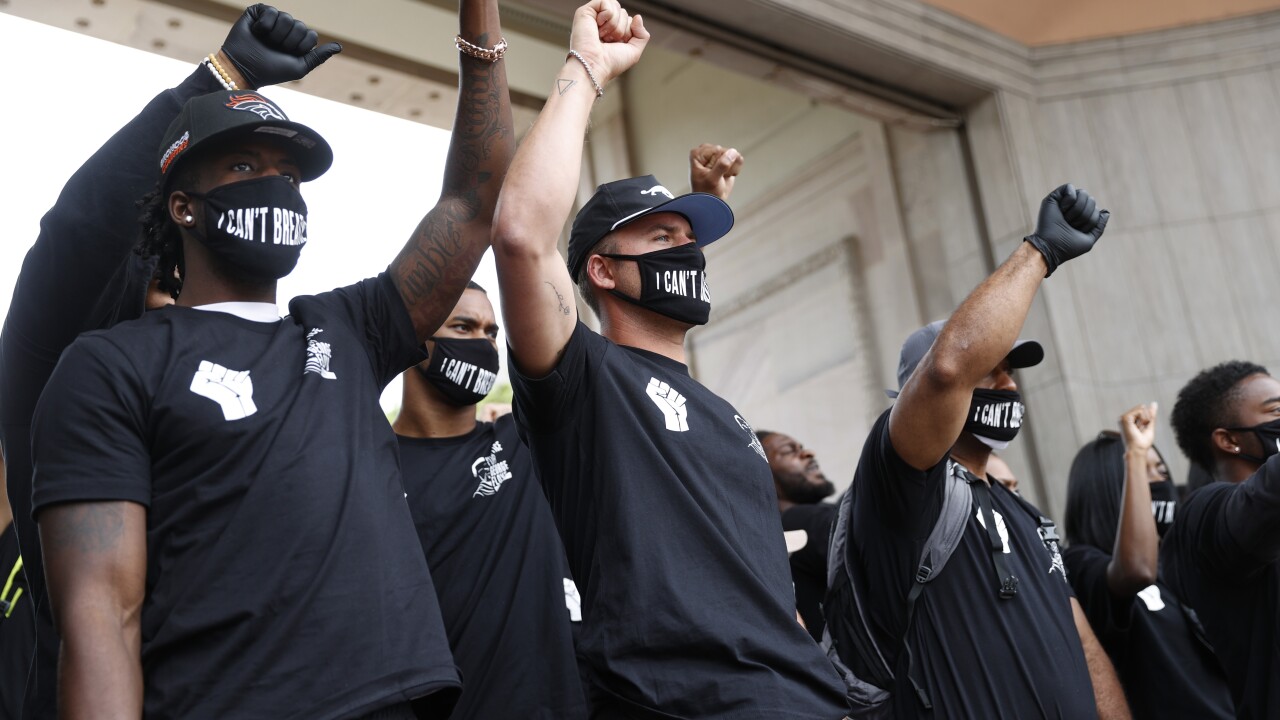 (Copyright 2020 The Associated Press. All rights reserved. This material may not be published, broadcast, rewritten or redistributed.)
David Zalubowski/AP
Denver Broncos personnel take part in a rally in the Greek Amphitheatre in Civic Center Park over the death of George Floyd Saturday, June 6, 2020, in downtown Denver. (AP Photo/David Zalubowski)

The program stems from discussions the players had amongst themselves and with the team’s head coach Vic Fangio, President and CEO Joe Ellis and General Manager and President of Football Operations John Elway on the morning of Aug. 27 – after Jacob Blake was shot in Wisconsin – that have continued over the past couple of weeks.

Under the plan, there will be time during hour-long meetings every Tuesday for players to work on and discuss social justice issues and current events at which local community leaders and policymakers will attend so they and players can talk about police reform voting rights, legislation, political candidates and issues, education, bond reform and the school-to-prison pipeline, among other issues, the Broncos said.

The team has offered up Empower Field at Mile High to be a polling or ballot drop box location for the state. The team says it will dedicate time to be sure any players and staffers who want to vote are registered and able to before the General Election.

The plan also includes the formation of a Broncos Diversity and Inclusion Committee to add more diversity inside the organization and a commitment from the Broncos to adding full-time positions for more people of color.

The committee will host programming and training for staff and players, which will include town halls, anti-racism and bias training, and discussion groups focused on race and gender.

The Broncos have also pledged $250,000 each year for player-led social justice work -- $150,00 of which will go toward players’ individual causes and another $100,000 of which will go toward organizations and causes that are voted on by the team’s social justice committee. And Elway has said he will donate $100,000 this year to police reform issues picked by players.

There will be a leadership program for the Boys & Girls Clubs of Metro Denver where players will work with teens through September on empowerment and diversity issues.

The Broncos were one of the most visible teams regarding the Black Lives Matter movement in June, organizing a peaceful protest through downtown Denver, including more than 60 players and members of the organization, Fangio among them. They also supported Senate Bill 217, the state’s new police reform law.

Broncos players who have been active on the social justice fronts have said it was important to get the team’s leadership on board with the efforts started by the players – something that was not the case with some of the team’s players’ efforts in years past.

"If guys are speaking out we want to make sure we are held accountable. But, we brought up Demaryius Thomas and Brandon Marshall taking a knee, and we felt like the organization didn't have their back when they were down there protesting. They just felt alone. They were losing sponsorships, and obviously the fans had a lot to say about it,” Broncos safety Justin Simmons said on Aug. 27 after practice was canceled and the team held a group meeting. “And it just felt like they were alone. We talk about how our voices are important, but how important are they if they we are not backed by those who have are backs when we are wearing their name across our chests?"

The Broncos said that day they would “fully and unconditionally” support the players and committed to change that “will take all of us” – something echoed in a statement by Ellis Wednesday upon the release of the details of the new initiatives.

"Our team has had a number of powerful, honest and at times uncomfortable conversations recently," Ellis said in a statement Wednesday. "Listening to the players—and watching what has taken place around the country—has helped us grow as an organization. I commend the players, John Elway, Vic Fangio and our staff for working together to take action and inspire change."

Together, we can #InspireChange — and that starts NOW.

“I’m a Black African-American living in America. And anything I can do to help make the times better and to inspire change, I will do,” Von Miller said.

“I can use this platform that I have, being an NFL professional athlete, with a lot of eyes on me, as a white male, and I can speak up and use my voice and say that it’s not OK. And that racism is a complete joke. It shouldn’t even be something in the question. It’s sickening. It makes my stomach hurt,” said offensive lineman Dalton Risner. “There needs to be social reform. There needs to be justice reform. There’s a lot of things in this world that need fixed, and they’re not going to get fixed in one day, but what I can do is use my voice and speak up.”