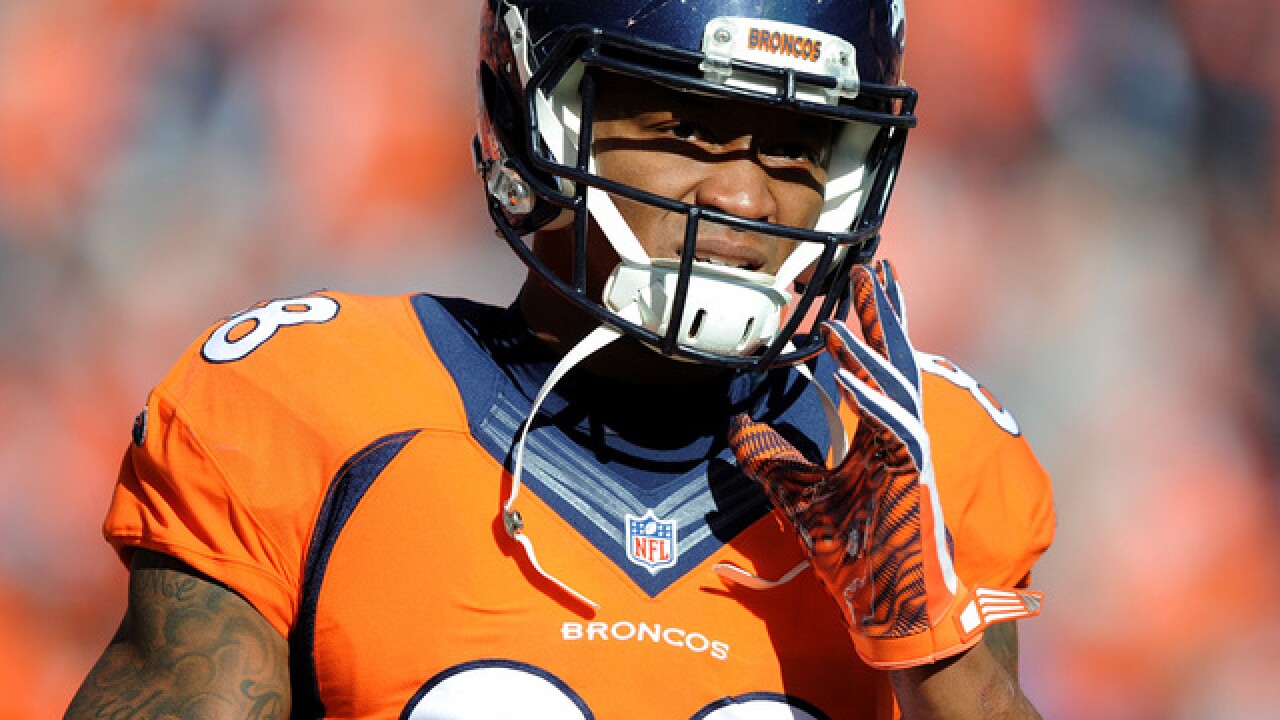 ENGLEWOOD, Colo. (AP) — Demaryius Thomas is no longer bogged down, and it's not only from losing a couple of pounds since winning the Super Bowl.

Unlike a year ago, the Denver Broncos' alpha receiver is free from worries about his contract, his mother's incarceration and the need to play catch-up in a new offense.

Now, he can focus solely on football.

"That's it," Thomas said Wednesday as the Super Bowl champs wrapped up their first few days of offseason work. "I don't have to worry about my mom. She's good. The contract is over with. I'm here now. I'm trying to learn what I need to learn so I won't be rushing it when" training camp rolls around.

Only this time, it's his QB who might be making all the adjustments.

Newcomer Mark Sanchez and Trevor Siemian, who took one snap as a rookie last year, are the only quarterbacks on Denver's revamped roster.

Brian Hoyer, who was recently released by the Texans, is expected to visit with Broncos general manager John Elway on Thursday, the latest chapter in Denver's ongoing quarterback quandary that began when Brock Osweiler bolted to Houston 48 hours after Peyton Manning's retirement.

"I really haven't paid much attention to it," Thomas said. "I've been working out with Sanchez and Trevor. Those are the guys we have right now. It's their decision upstairs to who they bring in. I'm going to work with who I got right now."

He was slow to adjust to coach Gary Kubiak's new offense and suffered through a season of bumps and bruises that may have contributed to his career-high 18 drops.

Although Thomas posted his second consecutive 100-catch season and fourth consecutive season with at least 1,300 yards receiving, he was a non-factor in the playoffs, catching just seven of 21 passes thrown his way for 60 yards and no touchdowns.

"For sure the worst of my past four years," Thomas said in describing his 2015 season. "And mainly with drops. I had a lot of drops I could have made plays on. I could have had a totally different year from that."

He's not necessarily harping on the drops, however, "because the main goal is to win the Super Bowl and we did that," Thomas said.

Thomas had just one catch for 8 yards in the Super Bowl, but he was able to celebrate the championship with his mother, Katina Smith, who was released from a federal prison in Florida last summer. Smith went to prison for drug trafficking when Thomas was 11. Her sentence was commuted by President Barack Obama in November.

Although Thomas said he still can't figure out why he dropped so many passes, he does see a simple solution.

A bounce-back year would go a long way in justifying Thomas' $13 million salary for 2016, and being here from the get-go should help him get a jumpstart.

"I think it will be a big difference. Coming into training camp and trying to learn stuff so fast wasn't so easy with the new offense. Being here now, seeing it from the beginning, we've got new plays in, new faces, so I think it'll be big being here with the guys now," Thomas said.

This year, Elway placed his franchise tag on Super Bowl MVP Von Miller, who is appearing on ABC's "Dancing With the Stars" rather than working out with his teammates.

Thomas suffered the consequences of skipping the offseason program last year, but he's not one to give unsolicited advice to Miller about signing his tender and showing up to work.