Colorado's Troy Terry played another great game, but the US was beaten by the Czech Republic 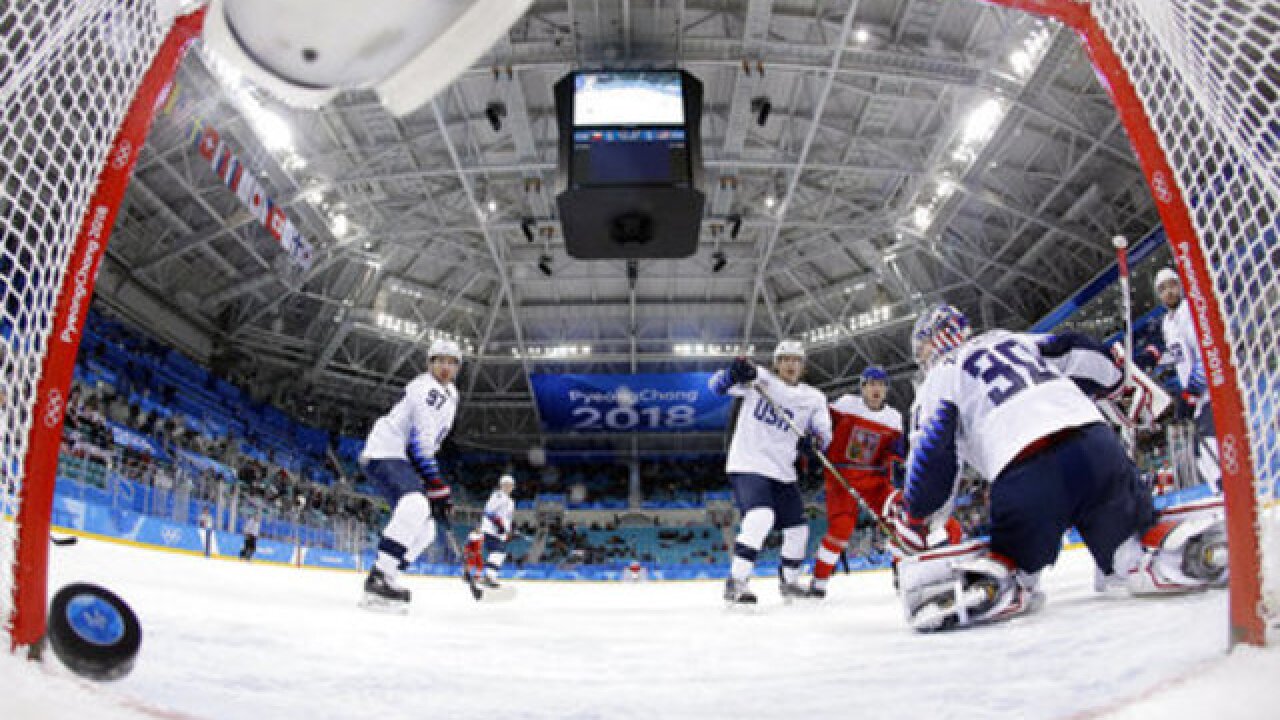 Copyright 2018 Scripps Media, Inc. All rights reserved. This material may not be published, broadcast, rewritten, or redistributed.
Matt Slocum
<p>The United States and the Czech Republic players look at the puck shot by Tomas Kundratek, of the Czech Republic, past goalie Ryan Zapolski (30), of the United States, for a goal during the second period of the quarterfinal round of the men's hockey game at the 2018 Winter Olympics in Gangneung, South Korea, Wednesday, Feb. 21, 2018. (AP Photo/Matt Slocum, Pool)</p>

GANGNEUNG, South Korea (AP) — Pavel Francouz stopped all five shooters and Petr Koukal scored the shootout winner as the Czech Republic eliminated the United States from the Olympics with a 3-2 victory in the quarterfinals Wednesday.

Jan Kovar and Tomas Kundratek scored in regulation for the Czech Republic, which was fresher after winning its group and getting a bye into the quarterfinals. The U.S. looked fatigued after facing Slovakia in the qualification round a day earlier and was outshot 29-20.

Ryan Donato and Jim Slater scored for the U.S, which again was led by its youngest players, including speedster Troy Terry. U.S. goaltender Ryan Zapolski allowed three goals on 29 shots and one in the shotoout, while Francouz stopped 18 in regulation and overtime.

"It's tough when it comes down to the shootout," U.S. captain Brian Gionta said. "It's tough to swallow."

Terry continued skating around opponents as he has done all tournament, and 6:20 in gave the U.S. a 1-0 lead. Terry sliced down the left wing and dished it to Donato, who used a double Czech Republic screen to beat Francouz.

"He's always been someone that can raise his game in the big games," Chuck Terry, Troy's father, said. "That part's not that surprising. Just the overwhelming thing of him being at the Olympics, it's pretty cool."

The goal was Donato's fifth in five games, passing his father and Harvard coach, Ted, who scored four for the U.S. at the 1992 Olympics in Albertville.

"I'd be happy if he doubled it," Ted Donato said.

The Czechs tied it at 1 at 15:12 after 39-year-old U.S. captain — and natural winger — Brian Gionta lost the faceoff clean and Jan Kolar got it back to Kovar, who beat Zapolski from long range with a screen in front for the kind of goal that been common at this tournament.

A parade to the penalty box by the U.S. beginning with a boarding call on John McCarthy at the end of the first made the opening half the second a one-sided game. On the power play and at even strength, the Czechs tilted the ice on the Americans and hemmed them in the zone, scoring a predictable goal from Kundratek 8:14 in to go up 2-1.

Just over two minutes later with the U.S. on another penalty kill and looking in serious trouble, Brian O'Neill flashed his speed once again and found Slater on the rush for the former Atlanta Thrashers forward's first goal of the tournament. The short-handed tying goal 10:23 in was the Americans' first shot of the second period.

The teams traded chances in the third period, none better than O'Neill clanking a shot off the cross bar with just under three minutes left on an odd-man rush. The U.S. got a power play at the end of regulation and into overtime but never got a shot on net.

With 35 seconds left in overtime, U.S. defenseman Bobby Sanguinetti's shot hit Francouz and sat in the crease, but the goalie was able to cover up.

"We couldn't get the bounces," Donato said.

The Czechs move on to face the winner of the Russians against Norway.