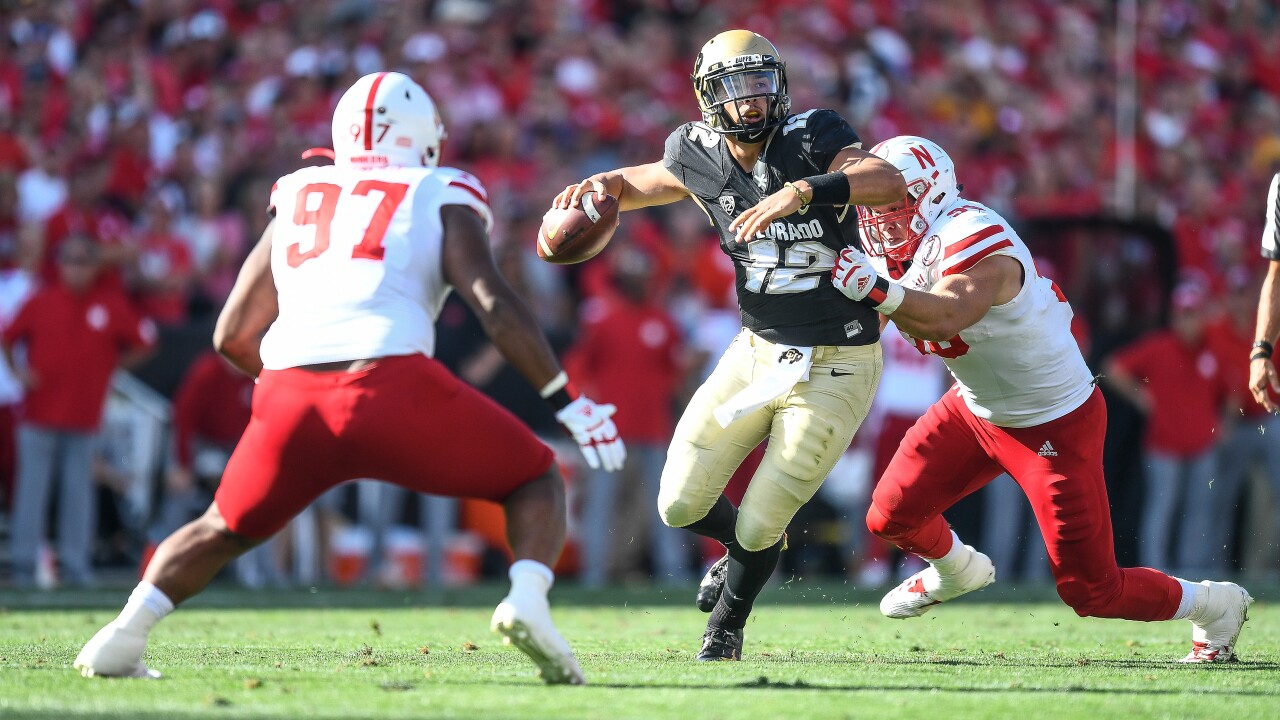 The students stormed the field in celebration of the Buffaloes' second straight win over their old Big 12 rival, whom they rallied to beat in the closing minutes last year in Lincoln.

The Buffaloes rallied from a 17-0 halftime deficit and improved to 2-0 under coach Mel Tucker while dropping the Cornhuskers to 1-1 and keeping second-year coach Scott Frost from winning his first road game.

"This is one of the hardest losses I've ever been a part of," Frost said.

Before Saturday, unranked Buffaloes teams were 1-22 all-time against ranked Nebraska teams with their only win coming in 1976 when the Cornhuskers were ranked third.

Rank this one right up there with that one.

It included the longest touchdown in Colorado's history, a 96-yard flea-flicker from Steven Montez to K.D. Nixon in a frenetic fourth quarter that featured 38 points and began with Nebraska up 17-7.

Pressed into kicking duties because the starter, Barret Pickering, was out with an undisclosed injury, Armstrong was perfect on four extra points and nailed a 26-yard field goal that gave Nebraska a 17-0 halftime lead.

When Mustafa Johnson sacked Adrian Martinez for the third time, this one for a 7-yard loss on third-and-9, suddenly Armstrong was facing a 49-yard try.

"I knew we didn't have a kicker," Frost lamented.

It was never close, sending thousands of Buffaloes fans onto the field in celebration and leaving the stands a sea of red as a good 40 percent of the sellout crowd of 52,829 was cheering for the visitors in Nebraska's first trip to Folsom Field in a decade.

Martinez, who replied to Colorado's 96-yard TD with a 75-yard TD strike to running back Maurice Washington on the very next play, gave Nebraska a 31-24 lead with a 6-yard keeper on fourth-and-1 with 5:49 left in regulation.

Laviska Shenault fumbled after a 54-yard return when Cam Taylor-Britt punched the ball out, but the Buffs forced a punt and Montez hit Tony Brown with a 26-yard scoring strike with 46 seconds remaining in regulation.

At halftime, "My message to the team was they gave us their best shot and we hadn't even scratched the surface of what we can do on either side of the ball," Tucker said. "And so it was just a matter of playing the next play, never looking at the scoreboard ... hitting a little bit harder.

"When we went out into the tunnel coming out for the second half, those guys were energized and ready to play ball."

Nebraska: The Huskers dominated the first half, putting together TD drives of 96 and 95 yards that began with Martinez in his own end zone. But maybe the altitude finally caught up to a Nebraska team that's no longer used to it.

Colorado: The Buffaloes are now 2-0 in the Mel Tucker era with wins over rivals Colorado State and Nebraska and Air Force up next weekend.

The Cornhuskers never trailed in regulation but their loss in Boulder could bump them from the Top 25.