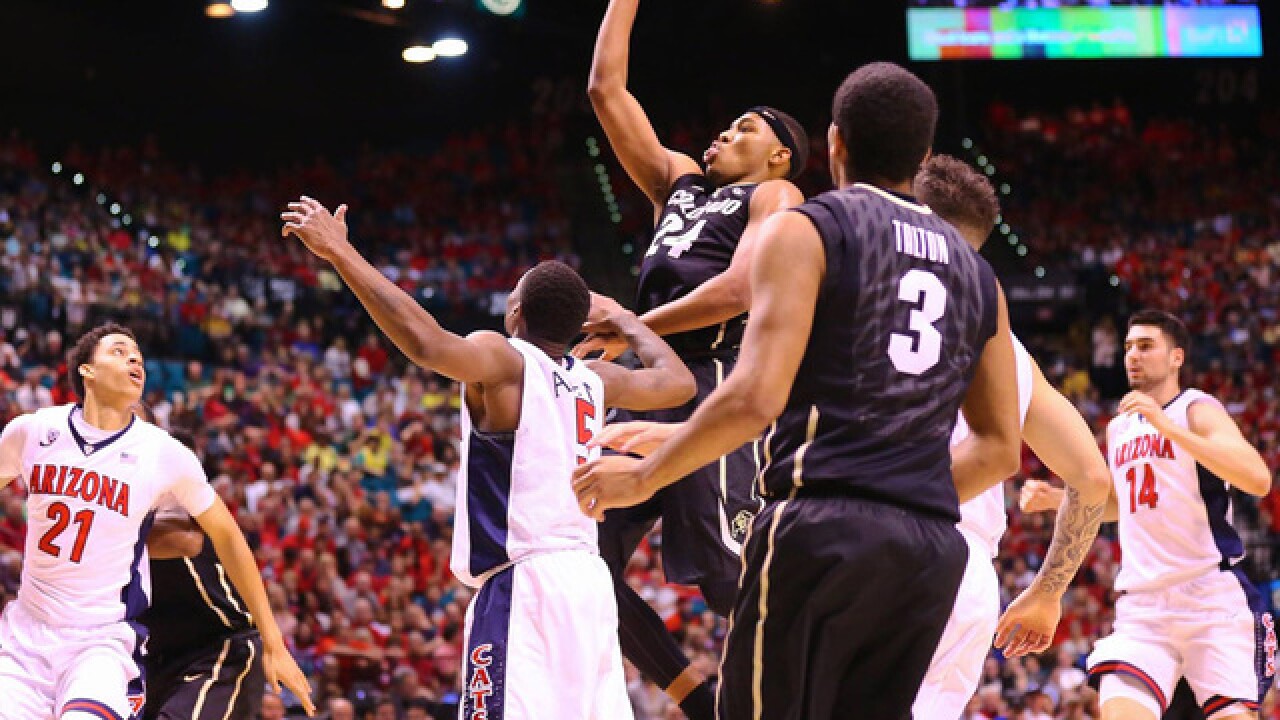 The 22-11 Buffs will have a chance to do just that on Thursday, when they open play in their fourth NCAA Tournament in the last five years against No. 9 seed Connecticut (11:30 a.m., TNT) in the NCAA South Regional in Des Moines, Iowa. If the Buffs win, they’ll face the winner of No. 1 Kansas and No. 16 Austin Peay in a Saturday game at Wells Fargo Arena.

While an NCAA at-large berth was expected, the official news was nevertheless greeted by a hearty cheer at an afternoon watch party at Boyle’s house.

“Now we know,” Boyle said with a smile as the Buffs heard their name. “Time to go and play.”

It will be the third NCAA appearance for CU’s seniors, including big man Josh Scott.

“My stomach’s been messed up all day thinking about it,” Scott said. “I’m just glad it’s over. It was great to see our name flash up on the screen.”

UConn, the 2014 NCAA champion, earned an automatic bid after winning the American Athletic Conference Tournament. The Huskies opened the tourney with a dramatic four-overtime win over Cincinnati, then knocked off Temple in the semifinals and Memphis in the championship game. Kevin Ollie’s team finished 24-10 overall and sixth in the American Athletic Conference with an 11-7 record.

Eight Buffs on the current roster were all on hand for the Buffs’ last NCAA appearance, two years ago against Pitt. That memory — a 77-48 shellacking when the Buffs were also a No. 8 seed — is one that will no doubt be a talking point this week.

“We know if we’re not ready to go, we’ll get rolled,” Boyle said. “We know UConn is a heck of a team. … The good thing about this team and being an 8-9 game again is we’ve got a lot of guys that were playing against Pitt. Guys that were freshmen and sophomores are juniors and seniors. They understand what can happen if you’re not ready to play and we can draw on that experience. It wasn’t too long ago that we lived it. We don’t want to be in that situation again. We want to advance and play whoever awaits us that next game.”

The NCAA berth is no doubt a bit of redemption for this team in the wake of last year’s disappointing 16-18 finish, one that saw CU end the season with a loss to Seattle in the College Basketball Invitational.

“Tad has brought the team together,” CU Athletic Director Rick George said. “The team just feels like they’re more of a team and more of a family, and they go out and play that way. They play hard. Sometimes we don’t play as well as we’d like, but we can go out and beat anybody — and I think that’s the expectation the players have as well.”

While many of the Buffs have NCAA Tournament experience, it will be the first such postseason for the younger players such as sophomore Tory Miller.

“When I saw our name up there, it was a big relief,” Miller said. “Now, it’s like coach said — this is where the real fun starts. I’m just excited to get out there and show people what the Pac-12 is about. Like coach said, we have to go out there and earn respect.”

On the rebounding side, Colorado has the statistical edge. The Buffs finished eighth in the nation in rebounding margin, averaging 8.9 more rebounds than their opponents this year. The Huskies, meanwhile, were 108th in rebound margin at 2.3.

In terms of momentum, however, the Huskies are on a roll — they’ve won seven of their last 10, including three in a row to claim the American Athletic Conference title. They also made national news in that tournament when they claimed a 104-97 win in four overtimes over Cincinnati in the opening round. The Huskies survived only because they received a 65-foot buzzer beater from Jalen Adams at the end of the third overtime.

Kevin Ollie’s squad also has some NCAA Tournament-tested players. At least six players on the current roster were on the 2014 NCAA championship squad that knocked off Kentucky in the title game. The Huskies were a No. 7 seed that season.

This year clinched an NCAA berth when they knocked off Memphis in the AAC championship game on Sunday, 72-58.

The Huskies have a balanced offense with four players averaging at least 12 points per game, led by Shonn Miller at 12.8 points per game and followed by Rodney Purvis with 12.5, Daniel Hamilton at 12.4 and Sterling Gibbs at 12.0. Hamilton, a 6-7 forward who had three straight double-doubles in the AAC tourney, also leads the team in rebounding with 12.4 boards per game.

The Huskies also shoot nearly 79 percent from the free throw line, and outscored opponents by more than 10 points per game this year.

UConn's biggest wins this year included victories over SMU (a team that defeated CU on a neutral floor in the preseason), Texas, Michigan, Memphis, Temple and Ohio State.

PAC-12 GETS SEVEN: The Pac-12 ended up with seven teams in the bracket, matching the ACC, Big Ten and Big 12 for the most of any conference. Oregon, a team with whom the Buffs split a season series, earned a No. 1 seed and will play the winner of Holy Cross and Southern. Other Pac-12 teams in the bracket and their opponents are Cal (No. 4) vs. Hawaii,  USC (No. 8) vs. Providence, Oregon State (No. 7) vs. VCU, Arizona (No. 6) vs. Vanderbilt or Wichita State and Utah (No. 3) vs. Fresno State.

POSSIBLE KU MATCHUP: For obvious reason, Boyle wasn’t to keen on talking about a possible matchup with Kansas, where he played his college ball. He and his staff know they have their hands full with UConn — a team that barely made the NCAA bracket two years ago, then ran the table en route to a championship.

But, he did note that the Iowa Events Center will likely have its share of KU fans, and said he wouldn’t mind if those fans decided to cheer for the Buffs in their matchup against UConn.

“I’m hoping a few of them still remember me from back in the day and will support the Buffs,” Boyle said.

NO. 8 AGAIN: While this is Boyle’s fourth trip to the NCAA Tournament with the Buffs, his teams have never been higher than a No. 8 seed.

“The committee’s got a hard job to do,” Boyle said. “You just play the games, kind of like your conference schedule. You just play the games and try to advance. I’m not going to get into the seeding. We’ve got to play our way into one of those top seeds some day so we’re not in this 8-9 game, but that’s something we can learn from.

“But right now this is where we are. We’re excited to be in it and looking forward to it.”