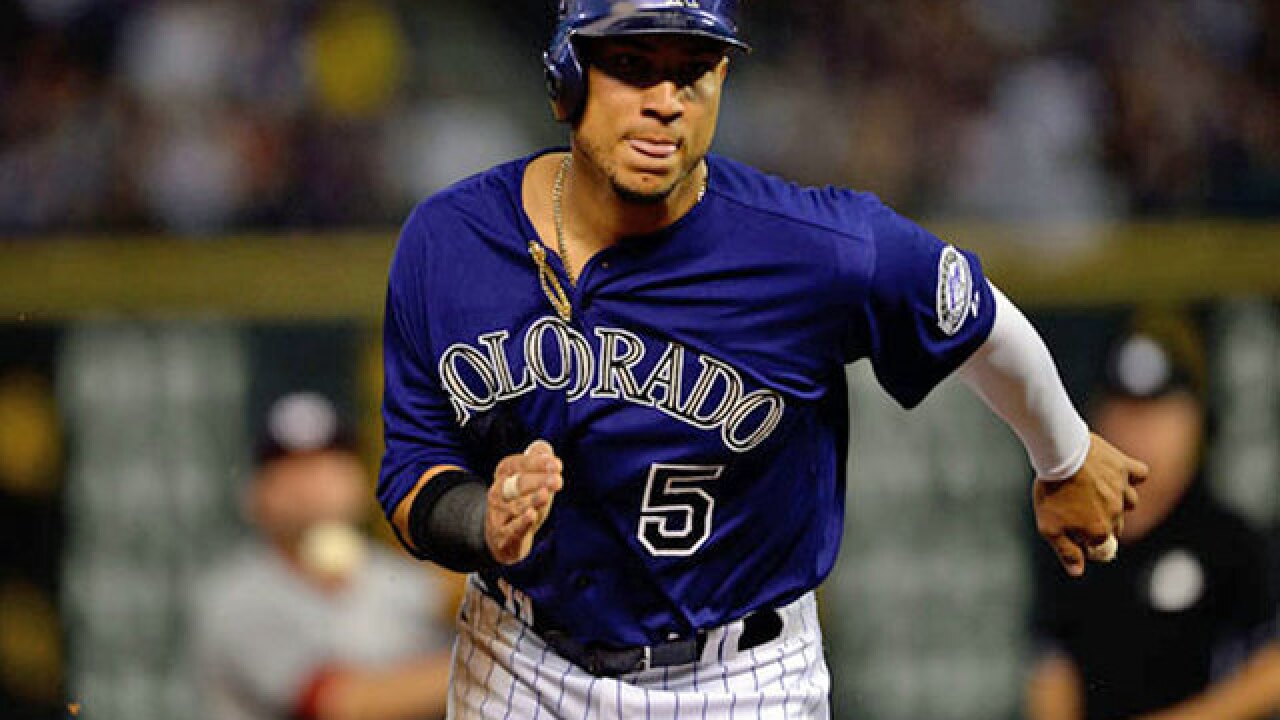 AAron Ontiveroz, The Denver Post
<p>Carlos Gonzalez of the Colorado Rockies runs for third base before making a bad slide and hurting himself against the Washington Nationals at Coors Field on July 21, 2014.</p>

The Colorado Rockies added another charismatic leader to their 2018 clubhouse.

They certainly didn't have to look very far.

Colorado finalized a $5 million, one-year contract with three-time All-Star  Carlos Gonzalez  , the longtime Rockies outfielder who has always been popular with his teammates in part because he rarely loses his sense of humor or perspective.

Not even last season, when he was in the midst of a prolonged slump. His agreement announced Monday includes another $3 million in bonuses based on days on the active roster.

Gonzalez had a $20 million salary last year in the final season of an $80 million, seven-year contract and became a free agent after  nine seasons  with the Rockies. The three-time Gold Glove  winner struggled for most of the year as the Rockies returned to the postseason for the first time since 2009. He showed signs of breaking out of his funk down the stretch, hitting six of his  14 homers  in September.

His reawakening bat happened to coincide with his ability to get  some restful sleep  . CarGo struggled with insomnia last summer and the more he slumped on the field — he was hitting .214 in mid-July — the worse his sleeping habits became. The pattern was all-too-familiar each night — get home from a game, think about it, watch movies or TV until around 3 a.m. and fitfully fall asleep only to wake up tired.

Gonzalez said a touch of insomnia is something that's plagued him for years in large part because of all the travel. Last August, he began talking to a sleep specialist, who recommended such things as keeping his room cool and dark, having his phone out of reach and no movies after games to help his slumber. That helped him get a solid seven hours of sleep each night.

This also helped: Tweaking his grip on the bat. The left-hander hit .377 in September.

"It's not like we're re-inventing something or trying to change my swing," Gonzalez explained in the lead-up to the playoffs. "I was trying to stay calm, lower my hands, not over-swing. I was trying to put a good swing to the ball. Stay in the zone."

Gonzalez was a member of the Rockies team that went to the playoffs in 2009. The squad returned to the postseason last season but lost 11-8 at Arizona in the NL wild-card game as Gonzalez went 2 for 5 with an RBI.

The 32-year-old was acquired from Oakland on Nov. 12, 2008, as part of a deal that sent Matt Holliday to the Athletics. Gonzalez could not find a long-term deal in a cool market for free agents and returns to a crowded outfield that includes reigning NL batting champion Charlie Blackmon, good friend Gerardo Parra, Ian Desmond, Raimel Tapia and David Dahl, who missed last season with a rib injury.

Gonzalez is a magnetic personality in the clubhouse. He's frequently bouncing from one conversation to the next, with manager Bud Black saying last season: "They really enjoy Carlos as a teammate and respect his tenure."

In his time with the Rockies, Gonzalez has five seasons with 25 or more homers, won the 2010 NL batting title with a .336 average and hit for the cycle on July 31, 2010, against the Chicago Cubs.

He's struggled with injuries in recent seasons, missing time in 2017 with a strained right shoulder. He was hobbled in 2014 after hurting his index finger and later undergoing knee surgery.

His 211 homers with Colorado are the fourth-most in team history, trailing only Todd Helton (369), Larry Walker (258) and Vinny Castilla (239). Gonzalez is fourth all-time among Rockies with 245 doubles and fifth in RBIs with 685.

To make room on the roster, the Rockies placed right-hander Rayan Gonzalez on the 60-day disabled list. He is recovering from Tommy John surgery.