Woody Paige: The Broncos have their quarterback in Keenum, but who will he throw to? 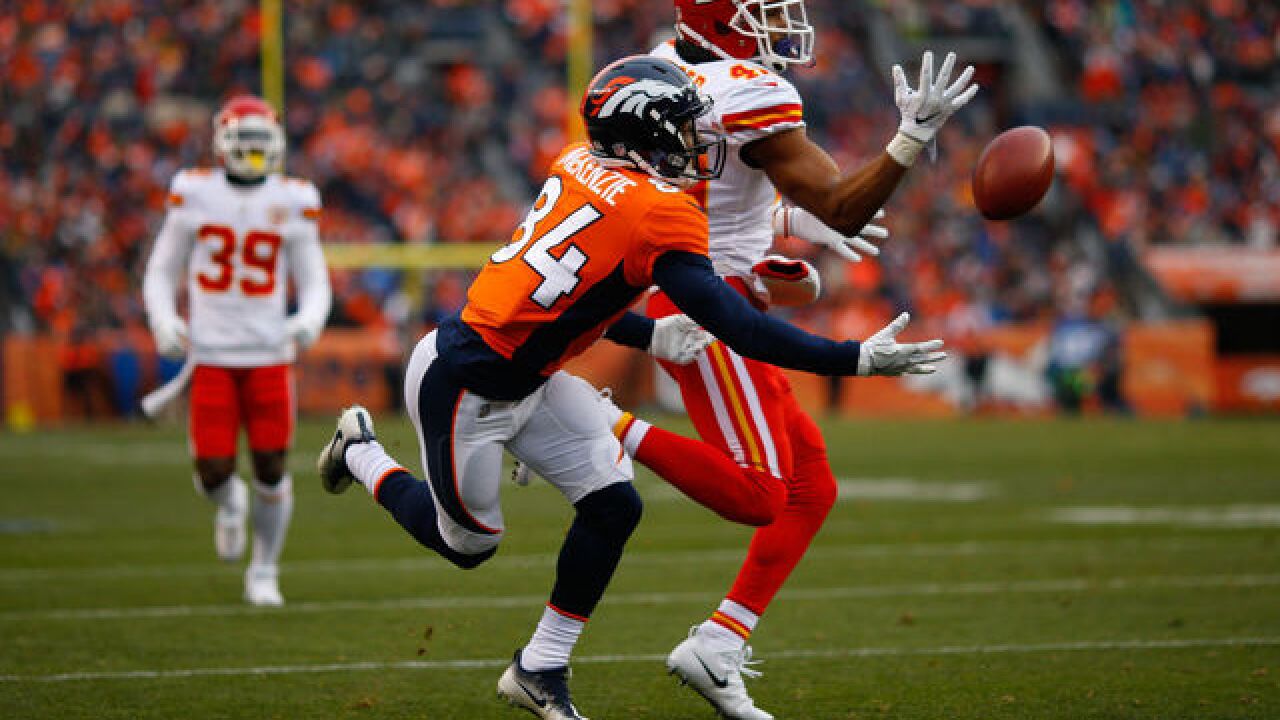 DENVER -- Other than Demaryius Thomas and Emmanuel Sanders, who is Case Keenum going to throw to?

Keenum brought up the prominent two wide receivers in his press conference Friday. However, excuse the Broncos’ “new starting quarterback,” as crowned by John Elway, if he didn’t do a deep dive to learn the names of the majority of the pass-catchers the Broncos currently possess on their roster.

Many never have recorded more than a few or, in some cases, even one business pass in the NFL.

The Broncos now are without five of their top nine statistical receivers-running backs-tight ends from 2017. They combined for 104 receptions.

On Monday, former second-round draft pick Cody Latimer, who had become a special special teams player but not a distinguished wide receiver in his four seasons, signed, as an unrestricted free agent, a two-year deal to join the Giants.

Latimer had caught only 35 career passes for 445 yards and just three touchdowns. But he did have more than half those (19) with two scores in 2017. Several days ago, the Broncos made no effort to keep Bennie Fowler III, who was third in yardage (350 yards), second in receiving touchdowns (three) and fourth in receptions (29).

Tight end Virgil Green became a free agent this off-season after seven ordinary years with the Broncos – 71 catches, 807 yards, four touchdowns. Primarily, though, he was a blocking tight end.

And another tight end, A.J. Derby, played in nine games (starting one) before being released.

Veteran Jamaal Charles was signed to be a third-down run, or catch, specialist, but basically was bench for long stretches. He did conclude his one-year stint in Denver with 23 catches for 129 yards.

D.T. and E.S. will return, although there were rumors that because of their salaries, one or the other might be gone. Their numbers dropped last season. In the case of Demaryius, he was working with lousy quarterback, and he has lost a step or four, and Sanders was out for four games with injuries.

Jordan Taylor, the ex-Peyton Manning caddie during the quarterback’s recovery, played in 10 games, but mostly as a punt returner, and ended up with 13 receptions for 142 yards.

Backup receiver and flop returner Isaiah McKenzie managed four receptions, but, foolishly, ran out of bounds on one. Fullback Andy Janovich also had four, but he was rarely involved in the offense, except as a backfield blocker, when he wasn’t hurt. And rookie runner De’Angelo Henderson, who was not on the game-day active roster for all but five games, had two catches, but one was very impressive at the end of the season – 29 yards for a touchdown.

And tight ends Jeff Heuerman, the former draft pick, and Austin Traylor, who was an in-season pickup, emerged late in 2017 and combined for 17 catches and 242 yards.

What about the rest?

Draft choices Carlos Henderson, who was hailed as the possible starting slot receiver, and Jake Butt, who was expected to join the team in mid-season, both were out all of 2017.

Who else is there? Several guys you’ve never heard of.

Candidates, at least through training camp, are several undrafted players and/or some who were discarded by other teams. That group includes wide receivers River Cracraft, who was on the Broncos’ practice squad twice last year and was cut twice, and resigned with the Broncos; Jordan Leslie, who has been with six different franchises, but has caught only one live pass for the Browns since  being signed by the Vikings as an college free agent in ’15, and Tim Patrick, who was signed to the Broncos’ practice squad when Cracraft was cut, and was cut himself, and eventually signed a futures contract with the Broncos. Kenny Bell is listed on the Broncos’ roster by some websites, but he is not on off the official broncos.com roster.

The other tight ends are a couple of street agents signed by the Broncos, but haven’t played here yet:  Matt LaCosse and Brian Parker.

As I stated, they are like the old rock group Question Mark and The Mysterians.

The outstanding veteran unrestricted free-agent market has dried up (Green signed with the Chargers), except for former Lions’ first-round bust Eric Ebron, but there seems to be no interest on his or the Broncos’ side, and future Hall of Famer Antonio Gates, who is 38, but wants to continue playing. The Broncos aren’t going there, it appears.

The Broncos reportedly are showing some curiosity about former Bills wide receiver Deonte Thompson, who is 29 and has 77 career receptions. He did make only $500,000 last season, and he did have field-stretching speed. Otherwise, the Broncos didn’t make a move on any of the high-price wideouts.

They’ll have to draft in the first five rounds a wide receiver or two, and a tight end, and a running back.

Case Keenum will be saying hello to a lot of new guys, and good-bye to several before he even gets to know them well.