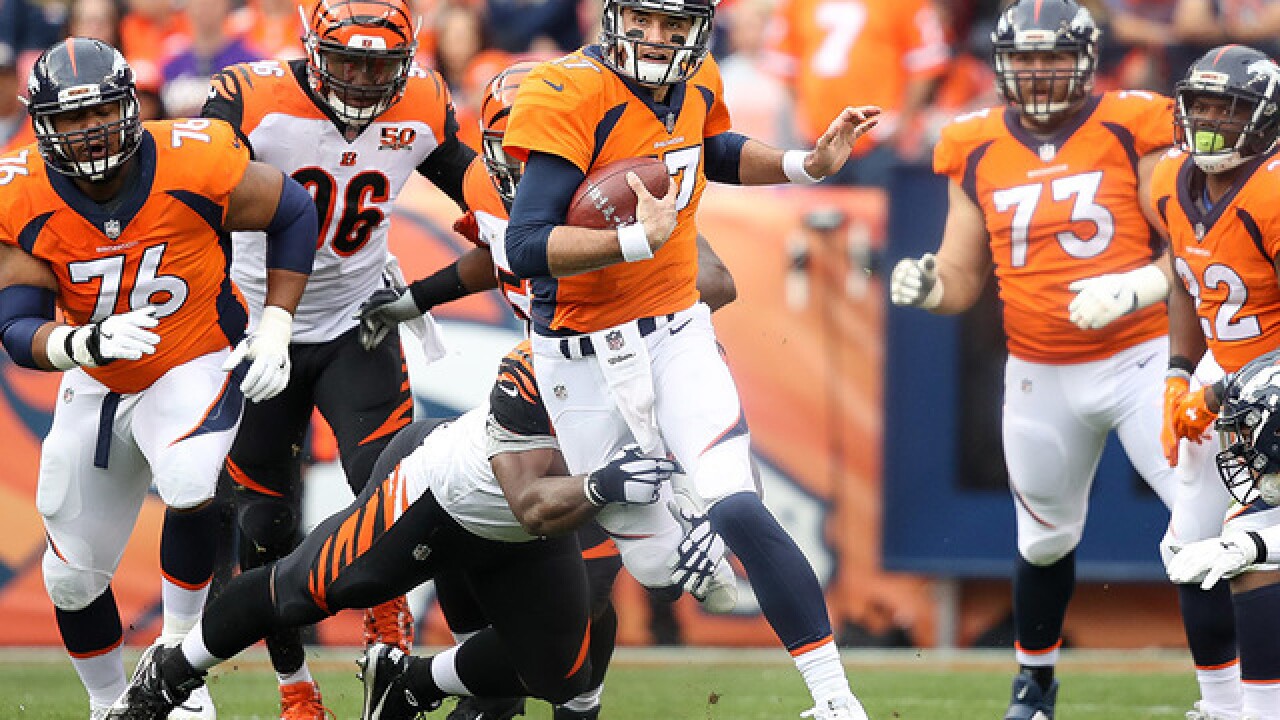 Copyright 2017 Scripps Media, Inc. All rights reserved. This material may not be published, broadcast, rewritten, or redistributed.
Matthew Stockman
<p>DENVER, CO - NOVEMBER 19: Quarterback Brock Osweiler #17 of the Denver Broncos rushes and is tackled by defensive tackle Geno Atkins #97 of the Cincinnati Bengals on a third down play in the first quarter of a game at Sports Authority Field at Mile High on November 19, 2017 in Denver, Colorado. (Photo by Matthew Stockman/Getty Images)</p>

All of Broncos Country sounds like that insurance duck:

But there are other positions on the team that must be addressed in the off-season.

This is my wish list, starting with Quarterback, not Aflac:

Quarterback -- The Broncos go all-out for Kirk Cousins as the starter for the next eight seasons. Of course, the acquisition depends on Washington. What does DC do about KC – franchise him for $34 million, transition him for $28 million, let him go or decide on a sign-and-trade? With the final three choices, the Broncos have a chance at Cousins. The backups should be Paxton Lynch (for one final look) and Chad Kelly (whose red-shirt year is over).  Kelly was, after all, who Vance Joseph called “my favorite quarterback in the draft” after he was chosen last.  Could Kelly be better than the QBs in this year’s draft?

Running back -- If’s he still available at No. 5, the Broncos should pick Saquon Barkley, the most explosive runner in the draft, and a return man, too. C.J. Anderson will be released for cap space ($6 million), so the backups would be Devontae Booker and late-comer De’Angelo Henderson. Danny Amendola could be a relative inexpensive free-agent addition.

Tight end – It’s assumed that Jake Butt finally will be healthy and take over, and he would be backed by Jeff Heuerman, who showed a little toward the end, and surprise Austin Traylor, with Virgil Green finally out. The Broncos should consider drafting another tight end in a middle round.

Wide receiver – Demaryius Thomas takes a salary cut, and Emmanuel is back. The Broncos sign the best slot receiver in the league, Jarvis Landry, as revenge to Adam Gase. Landry only made $868,000 last season. Carlos Henderson is off the injury shelf, and Jordan Taylor deserves to return. The Broncos should dump Isaiah McKenzie, but he’ll be around, and Cody Latimer, a free agent, re-ups. If not, the Broncos should grab free agent Donte Moncrief (Colts). And they should try to draft Michael Gallup of Colorado State, who will play for the Broncos’ staff in the Senior Bowl.

Offensive line – Sign free-agent guard Andrew Norwell, who was big time with the Panthers and made $2.7 million, and find out if left tackle Nate Solder will come home to Colorado for a deal less than the $10 million he earned with New England. If not, Greg Robinson of the Lions should be lured to Denver. Connor McGovern is the backup at center to Matt Paradis and both guards (Norwell and Ron Leary), and Garett Bolles moves to right tackle. Menelik Watson and his large contract are gone, and the Broncos draft another lineman, Orlando Brown of Oklahoma, in the second round – and trade Max Garcia. And there’s always Dillon “Dilly Dilly” Day.

Defensive line – The Broncos continue with Adam Gotsis, Domata Peko and Shelby Harris and add in DeMarcus Walker, who they couldn’t figure out was an end or a linebacker and totally messed him up. Tyrique Jarrett figures as a reserve, and Zach Kerr gets another year. Mitch Unrein, who was a solid backup for the Broncos and a starter for Chicago, would be a nice pickup as a free-agent. Jared Crick, out the entire season with an injury, would be worthy of another opportunity if healthy.

Linebacker – The Broncos keep Brandon Marshall (maybe on restructured deal) and re-sign free agent Todd Davis. Von Miller and Shane Ray are outside, and Shaquil Barrett probably goes as free agent to another team. Corey Nelson and Zaire Anderson will be back, and the Broncos add two more linebackers in the draft and free agency. I still like inside backer Zach Brown, who was with Washington this year and is a free agent.

Cornerback – Aqib Talib and his $12 million pact are traded, and the Broncos should sign Malcom Butler, who is only 27 and made just $3.9 million this season. The Broncos get him for half Talib’s price. Chris Harris Jr., Bradley Roby, Brendan Langley and Marcus Rios, who seemed like a player near the end of the season, are there, and the Broncos draft another corner high.

Safety – Justin Simmons will be healthy and team again with Darian Stewart, and Will Parks is a capable, but not great, backup. Jamal Carter has a future in this man’s league, and the Broncos get another safety in the fourth round and a cheap free-agent to help.

The roster, though, begins at quarterback.