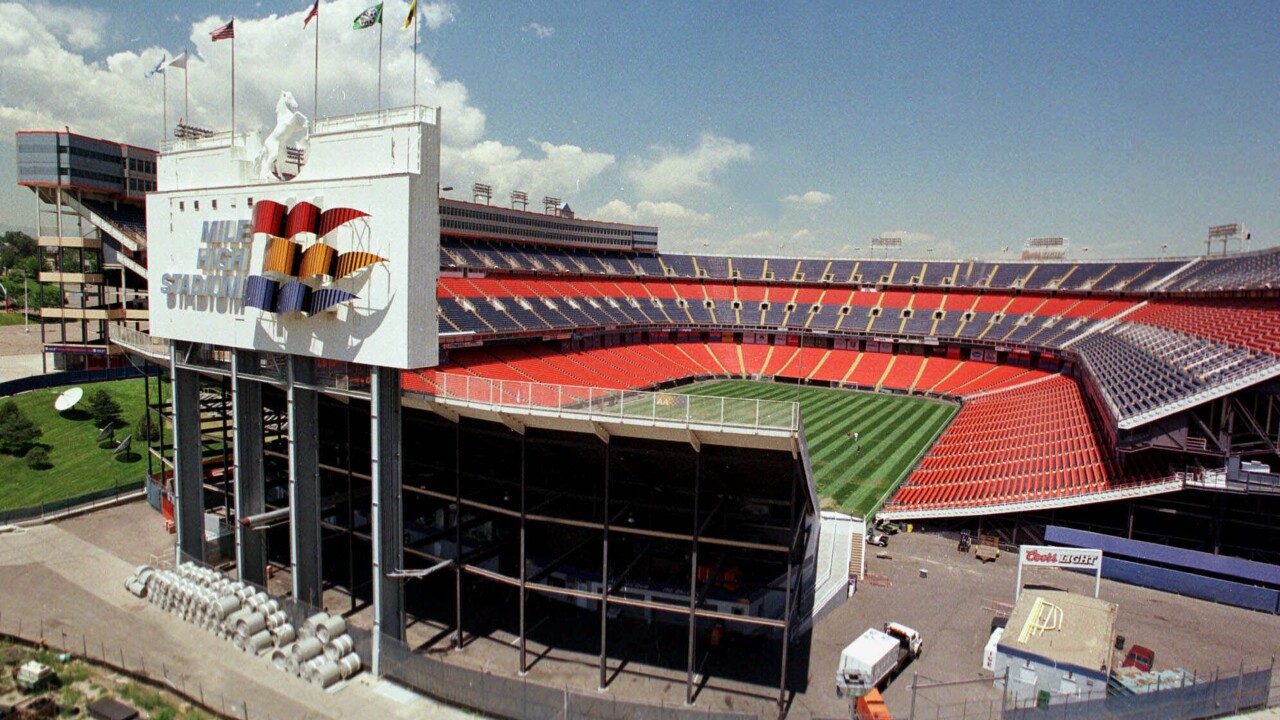 David Zalubowski/AP
FILE - In this July 21, 2000, file photograph, clouds roll in over the original Mile High Stadium from the main concourse of the new stadium being built within a stone's throw of the venerable field in Denver. (AP Photo/David Zalubowski, File)

DENVER — The Rockies finished their shortened season Sunday in Arizona, while the Broncos hosted the Tampa Bay Buccaneers in Denver.

Twenty-seven years ago, that scheduling arrangement would have been a requirement, not merely a coincidence.

Before Coors Field, the upstart Rockies shared a home with the Broncos at the old Mile High Stadium.

The accommodation wasn't rare — plenty of baseball and football teams have played on the same turf through the years, and until last year, the Raiders and Athletics still shared a stadium in Oakland.

What made the Denver setup unique was how Mile High Stadium transformed from gridiron to ballpark.

The stadium's towering east grandstand didn't just move — it floated, all 9 million pounds of it shifting along a thin sheet of water, moving 145 feet in or out, depending on which Denver team was playing that day.

By the time the Rockies were founded, the stadium transformation was old hat. Mile High had hosted minor league baseball for decades, and the floating grandstand was engineered in the mid-1970s, when the east side of the stadium was expanded.

The expansion of the east grandstand was enough of a project on its own. The stands stood 13 stories high, 450 feet long and 200 feet wide, and they formed Mile High Stadium into a massive horseshoe, increasing capacity to more than 76,000.

While the stands would give the Broncos more seats for their growing crowds, the engineers still faced a hurdle: How could they keep the stadium playable for baseball? And how could they find an efficient way to do that?

When configured for a football game, the east stands would cut off the baseball field shortly behind the infield dirt in left field. The engineers needed a way to move the east stands back about 145 feet — and do so efficiently, when the baseball and football seasons overlapped in September.

The project engineer, James Tolle, who worked for the DMJM-Phillips Reister firm in Denver, said they considered moving the stands along railroad tracks. A system of compressed air was an option, too, and had been used in the recent construction of Aloha Stadium in Hawaii.

But the compressed air system — in which Aloha Stadium stands would essentially glide from a football to baseball configuration — would prove to be unreliable, costly and time-consuming, and Tolle figured they had a better chance with a more solid state than air.

So why not float it?

The concept might be hard to comprehend for anyone without a background in engineering. But Tolle, retired and now living in Broomfield, recalled the process as if it was routine.

The system, Tolle said, worked through 163 water bearings that were placed beneath the east stands. When crews were ready to move the stands, they pumped water into the bearings, slightly lifting that side of the stadium. A sheet of water about 1/3 of an inch deep then formed beneath the stands, and two hydraulic jacks pulled the stands in or out, moving about six feet at a time.

"It slides very easily," said Tolle, "it" being the 9 million-pound, triple-decked stadium grandstand.

The project had its doubters.

Tolle, in 2010, recalled to the Denver Post his memories of the day the stadium was floated for the first time in 1977.

“I believe there probably were more naysayers than believers in the crowd,” Tolle told the Post. “I never had any doubts myself. Mayor Bill McNichols asked if we had any doubts and I said I was 100% sure it would work.”

The process would ultimately take about six hours to complete, and it never failed — not that Tolle was surprised.

How confident was Tolle that first day? As the hulking stadium gradually floated into place, Tolle watched from the top of the stands, along for the ride.

"I was very pleased that first day," Tolle told the Post. "I never had any doubts that it would work."