Von Miller signs off on Adam Jones signing: 'We got dogs' 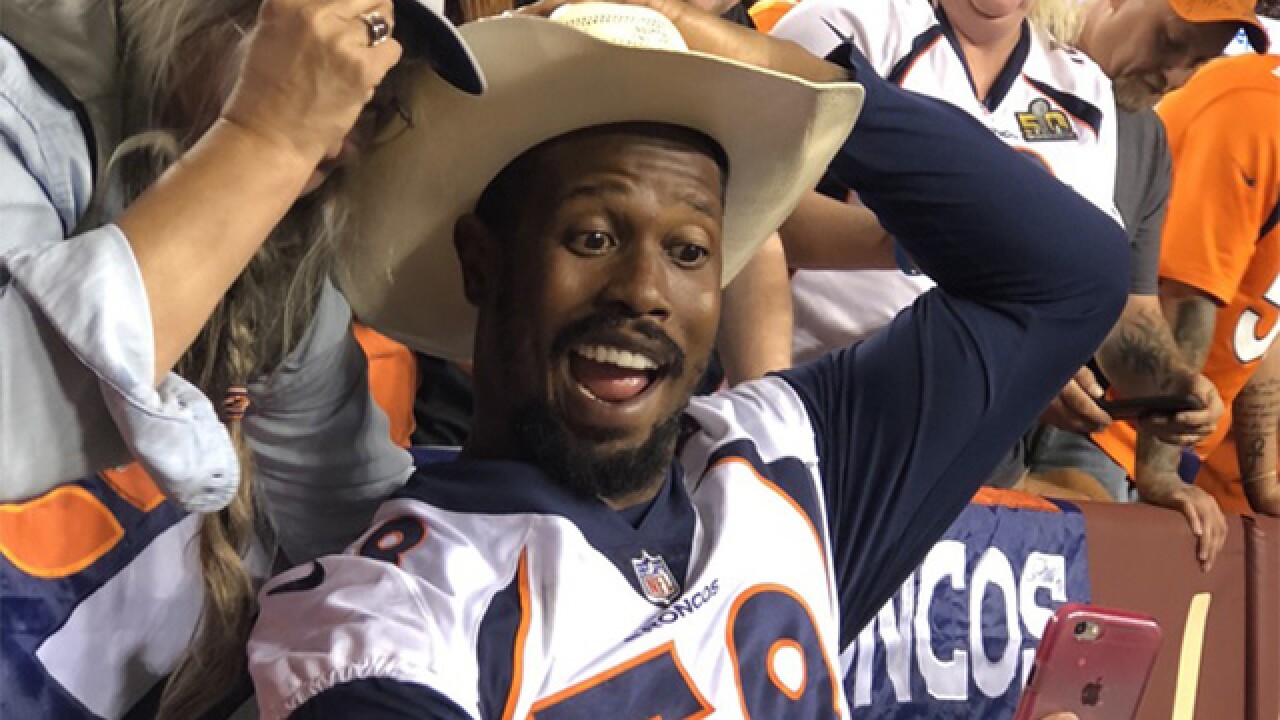 At 34, does the reserve cornerback have anything left? Given his off-field issues, is he worth the risk? All-Pro outside linebacker Von Miller believes so. Wednesday, I asked the Broncos' best player his opinion on the signing. He left no ambiguity.

"I think it's great, man. Somebody said we don't have no dogs. Hey, we've got dogs. We've got dogs, man," Miller said. "Having a guy like Adam is amazing. I have known Adam for a long time in the league. To have (him) in the locker room, I am super excited about it. It's going to be good."

As is his wont, Miller enjoys having fun. His answer, while truthful, represented a playful jab at one of his good friends and former teammates, Aqib Talib. In a Sports Illustrated interview a few months ago, Talib took umbrage with some of general manager John Elway's personnel decisions, which included trading Talib to the Los Angeles Rams.

"Maybe they should stop firing all the dogs," Talib told SI. "That (Super Bowl 50) team was full of dogs, and now they're all gone."

Miller and Chris Harris have clapped back at that notion since training camp opened. Miller and Harris consider themselves 'dogs,' and Miller lumps Jones into that category. Future Hall of Famer Champ Bailey signed off on Jones. On Instagram, he insisted he's cool with Jones becoming the first to wear No. 24 -- which he's expected to do -- since Bailey left the Broncos following the 2013 season.

Jones is not likely to play in the Broncos preseason finale on Thursday at Arizona. The Broncos face Talib on Oct. 14. If nothing else, it provides juice to a game that will also feature the return of former Broncos defensive coordinator Wade Phillips.

Quarterback Case Keenum remains polite. But he couldn't help himself at the Broncos kickoff luncheon Wednesday. As emcee Dave Logan asked a question about the past, Keenum stopped him.

"I am going to interrupt you man because I am kind of tired of talking about last year. I don't know about you guys. I know where I am from is over. Where these guys are from is over. It's a new year," Keenum said. "We are excited as heck to get out there and play Seattle (on Sept. 9). This is a great group of guys. Dave, you are my guy, I love you bro. You look good in the suit and tie."

The Broncos will split the time with quarterbacks against the Cardinals. Chad Kelly gets the first half with Paxton Lynch taking over for the final two quarters. Kelly has impressed so much that it's more likely than not that the Broncos begin the season with him as the backup. That would create an avenue for Paxton Lynch -- as I wrote on Tuesday -- to remain with the team as the third stringer. The Broncos are not looking to add a veteran No. 3.