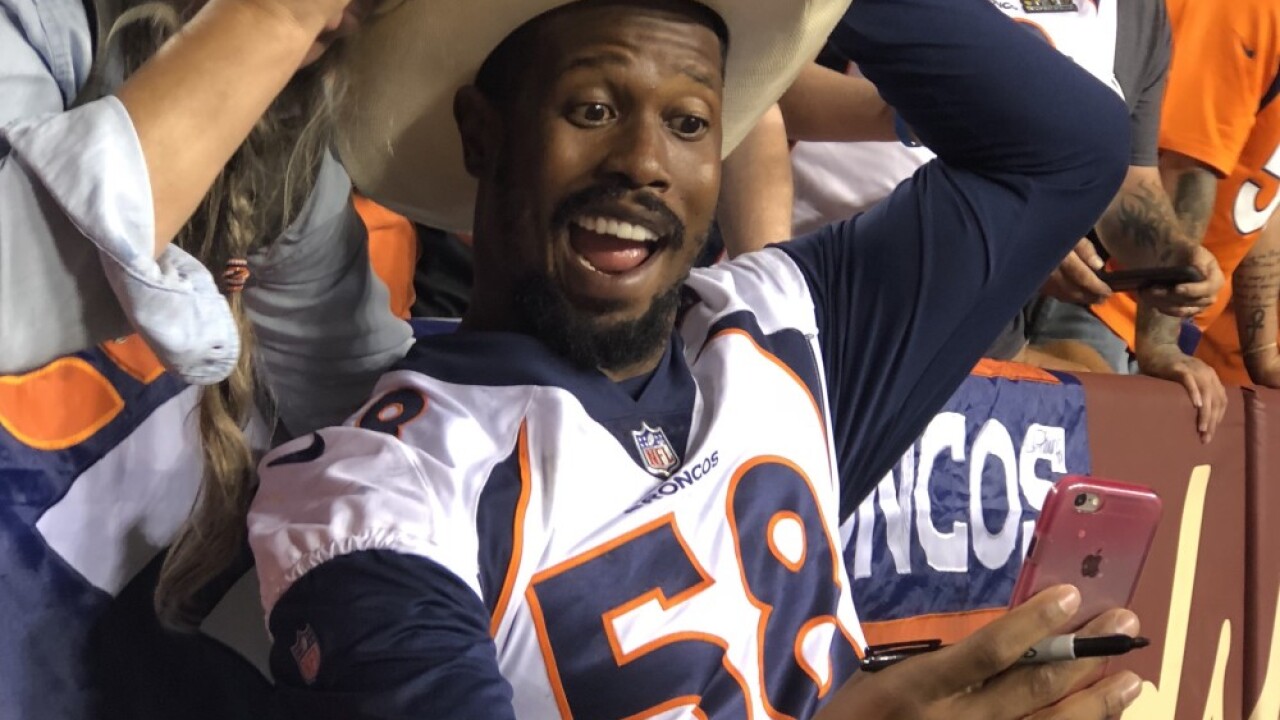 ENGLEWOOD, Colo. — Von Miller hasn't lived up to his expectations this season. But he has lived up to his reputation. Even without his usual eye-opening statistics, Miller was voted as a starter in the Pro Bowl. Miller extended his streak to six straight Pro Bowl berths and has eight trips overall. Three teammates could join him in Orlando on Jan. 26, 2020. Per sources, receiver Courtland Sutton (second), safety Kareem Jackson (third), and returner Diontae Spencer (third) were chosen as alternates. That means they are on the list to replace injured players or those with postseason obligations.

Miller, 30, has seven sacks in 13 games, leaving him on pace for his lowest total since 2013, the only season he has failed to earn Pro Bowl honors. However, Miller has played roughly 90 percent of the snaps this season and improved his run defense. The lack of sacks doesn't tell the entire story. Miller ranks seventh in pressures (33) and eighth in quarterback hits (16), despite missing a game for the first time since 2013 with a sprained ACL in his left knee. Miller is only the fourth Broncos player to get named to eight Pro Bowls, joining John Elway (nine), Steve Atwater (eight) and Champ Bailey. Elway and Bailey are Hall of Famers, and Atwater is a candidate to reach Canton again this February.

Miller expressed frustration after Sunday's ninth-straight loss the Chiefs, creating questions about his future. He put that to rest Tuesday, telling Denver7, "I don't like the way some of it was portrayed. I don't want to leave. At all. This is my identity, playing for Broncos. I have no Plan B. That's why it hurts so much to lose."

Sutton delivered a breakthrough performance in his second year. The former SMU star boasts 63 receptions for 1,019 yards and six touchdowns. He has excelled despite the Broncos starting three different quarterbacks this season. Sutton credits his offseason work for improving his ability to get off the line better and create space. He has also shown better body control on highlight catches.

For Jackson, the honor comes on a day when the NFL announced he would be suspended the final two games stemming for a Sept. 19 DUI arrest. On the field, Jackson has lived up to his billing. Playing safety full time for the first time in his career, Jackson has 71 tackles and brings toughness. He has delivered the biggest hits of the season in wins against the Chargers, Texans and last week's loss to the Chiefs.

Spencer finally created stability for the Broncos' return game. A veteran from the Canadian Football League, Spencer averages 7.9 yards per punt return with a long of 42. He also averages 28.9 yards on 12 kick returns.

Safety Justin Simmons and Derek Wolfe were notable snubs. Simmons has graded out as the team's best performer in many weeks. He leads the Broncos with four interceptions. Wolfe owns a career-high seven sacks, pulling it off in 12 games before dislocating his left elbow.