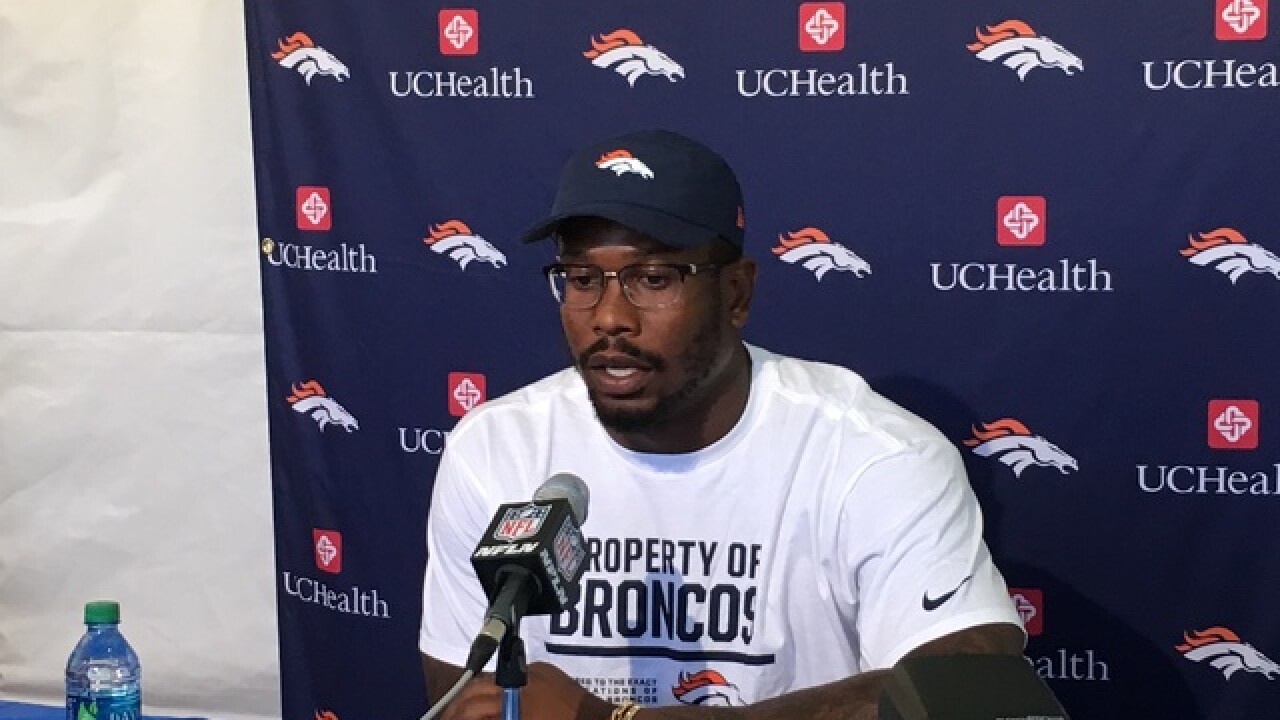 CENTENNIAL, Colo. -- For those who think OTAs are overrated, consider Von Miller exhibit A.

The Super Bowl 50 MVP skipped the workouts while angling for a new contract. A few hours before the July 15 deadline, he landed a six-year, $114.5-million deal with $70 million guaranteed. Good luck on telling he missed out on anything. Miller remains dominant in training camp, wrecking plays even when double-teamed.

"I think maybe thought with no offseason that he wouldn't be ready physically. He looks ready to me," defensive coordinator Wade Phillips said. "He moves tremendously well. He wants to be a leader, and that's important too."

Miller admits this training camp, his sixth, is different. His record contract -- the most ever for a defensive player -- shines a neon light in his face. He sees the pressure through a narrow lens. He's not worried about external expectations, only doing right by his team. There are no distractions of a contract or his future.

"It's all football. That's what you want. That's when you can be at your best," Miller said. "There's where I am right now."

Miller remains a fan favorite. In Manning's absence, Miller boasts the highest popularity among fans. He receives the largest cheers each day. It doesn't hurt that Miller connects with them on multiple social media platforms, including Snapchat, Twitter and Instagram.

"Instagram is instant. You post a picture, you get comments. Twitter, you can post pictures on there too or post your feelings. Snapchat is a great way to bring the video aspect into it," Miller said. "It's a great way for guys to see what I am doing on a daily basis. I feel like I am a regular guy and I just try to maintain that through my social media."

"That's why we drafted him. Hopefully we get Ty back soon as possible. But if not the first move is to move Connor up," Kubiak said.

TD on CJ on TD

Terrell Davis believes C.J. Anderson can be a bellcow back, praising his strength and balance. He loves the way he piles up yards after contact. He emphasized to Anderson on Monday the importance of starting this season to "show them they should give you the ball more." Anderson reported to camp at 217 pounds, lighter than a year ago. He is showing the same quickness and power that defined the second half of last season. He has set big goals.

"Everyone wants to have a season like TD," said Anderson of Davis, who once topped 2,000 yards.

Davis experienced a starbust career. What it lacked in length, it made up for in accomplishments. He helped the Broncos repeat as Super Bowl champions and he averaged 142.5 yards rushing in eight postseason games.

"I think it's important how you played in big games," said Davis, who is growing anxious about his Hall of Fame chances, but admitted, "It's out of my control."

Vance Walker sat out with a back injury on Monday, but has made an impact in camp as the team looks to replace Malik Jackson. Position coach Bill Kollar praised his ability to stuff the run.

With Darius Kilgo still a work in progress, Walker will be counted on to play meaningful snaps.

Ronnie Hillman (back) and receiver Marlon Brown did not participate in Monday's morning workout.

Kubiak on why the team placed defensive tackle Phil Taylor on IR, which is expected to end his time in Denver: "He worked hard, but we felt it was time to make a move."

Why is running back Devontae Booker getting second-team reps? He's better in pass protection than most rookies. If that continues, it will only help him get playing time sooner.

Michael Schofield is working at guard and tackle. The Broncos prefer to have versatile backups to give them more flexibility with their gameday roster.

Defensive back Taurean Nixon is getting work on kickoff return as a potential avenue to a roster spot. Bennie Fowler returned a few kicks in drills. He's been impressive as a wide receiver as he tries to lock down the No. 3 spot in a race with Cody Latimer.