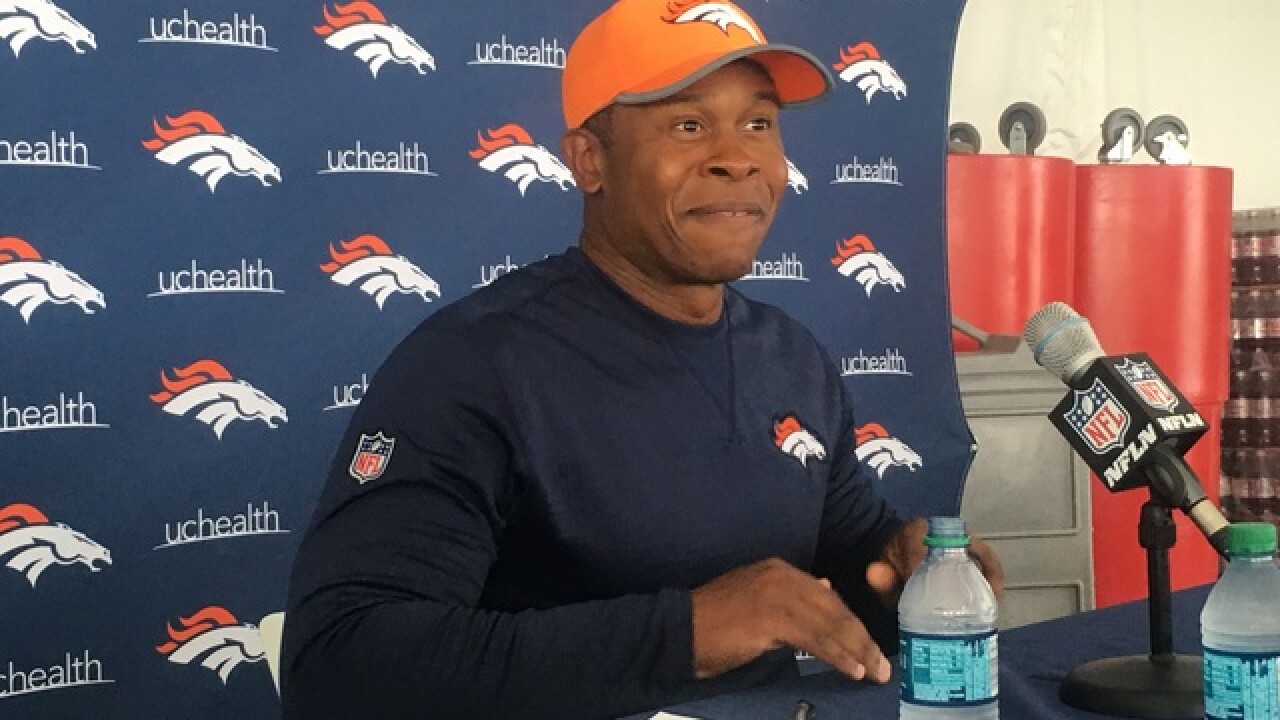 DENVER — Urgency and humility continue to resonate offseason as the Broncos attempt to avoid back-to-back losing seasons for the first time since 1972.

The Broncos sank to 5-11 a year ago, won one road game and endured an eight-game losing skid, matching the worst in five decades. It frames the expectations going forward.

"My message is going to be: it’s a new year. We want everybody to put last year behind us. Not forget last year because it happened but obviously have a clean slate, move forward and let’s get better as a football team. We want to stress this spring having more accountability," Broncos coach Vance Joseph said from the NFL owners meetings. "That’s where it starts with getting better. Everyone doing their job better. Myself, the coaches, the players -- everyone diving in and doing a better job than we did last year."

Little went right in 2017 after a 3-1 start. The Broncos returned from a bye week, and the winless New York Giants boxed their ears. It set in motion a 2-10 finish that nearly cost Joseph his job after one season.

Joseph must improve, ruling with more authority and coaching his coaches better. Too much trust in assistants led to curious, if not disastrous decisions. The Broncos' issues go beyond Joseph. They require better play across the board. General Manager John Elway has challenged stars to improve, among them Von Miller, Brandon Marshall, Demaryius Thomas and Emmanuel Sanders.

Talent upgrades are a must. The Broncos believe they addressed some targeted concerns, starting with the leaky offensive line that has been an issue since Peyton Manning's final season. That 2015 group solidified down the stretch and played its best during the postseason. Consistency has been absent ever since.

"I can guarantee you that Bolles is going to be the left tackle. We’ve got a couple of guard candidates, obviously with Leary being probably out at left guard again. Obviously, Paradis being our center. I thought if we played tomorrow, McGovern played well the last month of the season. He would have a chance to be our right guard. Right tackle, we trade for Jared and we’ve got Menelik (Watson). He’s trying to get healthy. We’ll compete there," Joseph said. "Again, things change. Max would probably have to flip and play both (guard positions). That’s the way I see it right now. Things do change. We have a draft. Leary was a left guard in Dallas when we signed him. Again, I’m a firm believer when you see sign free agents at certain positions, and when you sign free agents to do a certain skillset for you, you don’t want to change those guys. I think our football team will be better with Leary playing left guard."

The Broncos ran the ball effectively at times, though were submarined by using a three-wide formation with deep pass block sets for long stretches. Denver allowed 52 sacks, tied for third most in the NFL.

Much of the offseason has centered on quarterbacks. The Broncos landed their starter in free agent Case Keenum. However, they are dating, not married to him. They signed Keenum to a two-year, $36 million deal, with $25 million guaranteed. He enters the offseason workouts next month as the man for the first time in his career. And yet, the Broncos could still take a quarterback with the fifth pick overall, which would be an indictment of Paxton Lynch, even if they say otherwise. Lynch, for now, is the backup.

"I think Paxton is a factor. Paxton’s had 4-5 starts and to deem Paxton not capable, that’s no fair," Joseph said. "Obviously it’s an age of instant gratification for all of us—for the media and (everyone) —but it takes time to (be a) good quarterback in this league. I think once Paxton gets more time he’s going to get better as a quarterback. By no means is Paxton Lynch done. By no means at all."

The Broncos continue to keep all options open with their first pick. They could keep the pick, with the latest speculation suggesting North Carolina State defensive end Bradley Chubb as the favorite. However, trading has not been ruled out, and a compelling argument can be made to move back and add a first-rounder. The Broncos remain encouraged by the offseason progress of outside linebacker Shane Ray and defensive end DeMarcus Walker. Both have added weight and are getting stronger. Switching Walker to outside linebacker, in hindsight, "did not help him at all," Joseph admitted.

Denver continues to switch up coaching assignments. After attempting to hire DeMarcus Ware and Chad Brown as pass-rushing specialists, the team will use internal staff for the job. Miller will fall under the umbrella of defensive line coach Bill Kollar.

"The plan there is we’re going to have the three-down guys and our ‘Will’ backer in Kollar’s room. We’re going to have our ‘Sam,’ ‘Mike’ and ‘Mo’ be with (linebackers coach) Reggie Herring. Assistant defensive line coach Chris Beake is going to be our go-between between our outside backers and our front-four rushers, basically, as far as the scheme," Joseph said. "We didn’t replace Coach ‘Pug’ (outside linebacker coach Fred Pagac), but we adjusted our coaching rooms to basically put the ‘Will’ backer with Coach Kollar and keep the ‘Sam,’ ‘Mike’ and ‘Mo’ with Coach Herring.”

Joseph addressed a wide range of topics during the breakfast session in Florida. Punt return always perks up the ears of Broncos fans after Isaiah McKenzie's struggles. Joseph said Jordan Taylor will enter the offseason as the returner, but said McKenzie remains in the mix.

“I think Jordan has earned the right to come back as the guy. But again, it’s going to be OTAs and training camp. We’re competing, but who’s first in line? I would say Jordan is first in line, but absolutely it’s a different year for all of us. It’s a clean slate for every player," Joseph said. "Obviously McKenzie was drafted to do that job. His issue is not catching the football. It’s not. It’s decision making. He has to make better decisions. We have to get him back to making good decisions."