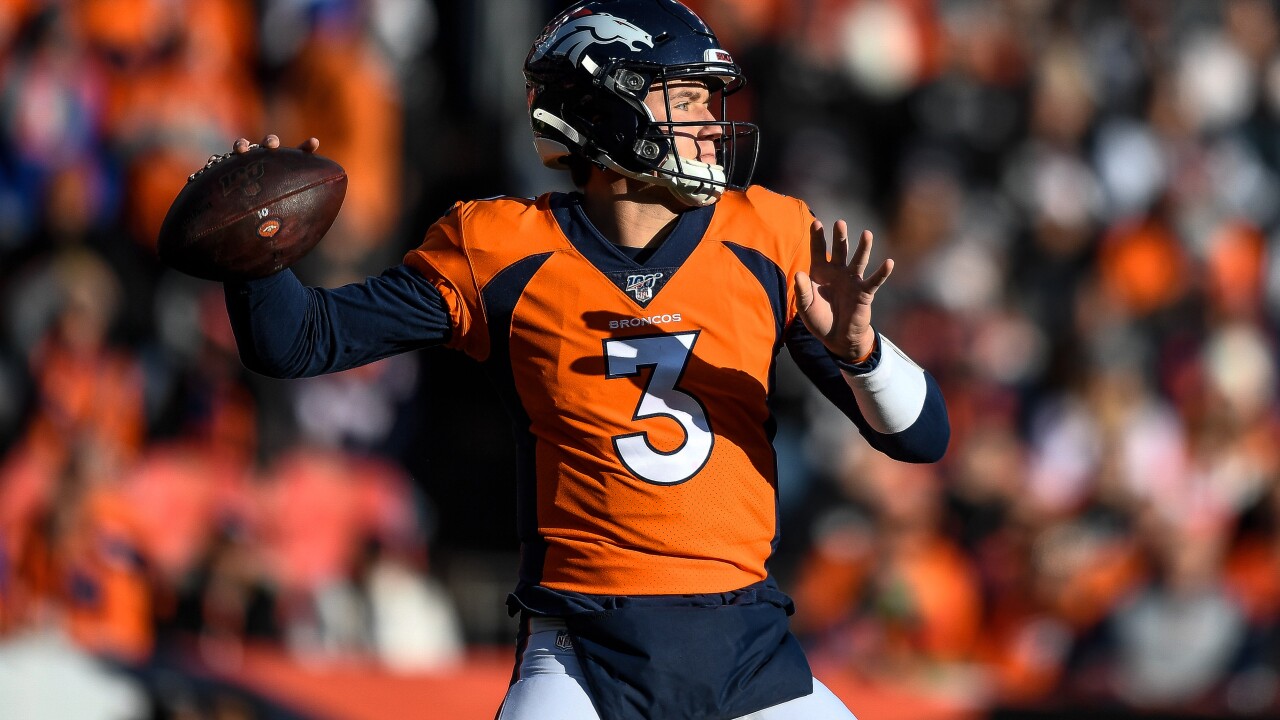 DENVER -- Drew Lock leaned back into the bench, and looked up at a teammate with a grin, in the third quarter Sunday. The rookie then, without hesitation, began singing along to the stadium's blaring of Young Jeezy's "Put On." He used animated hand gestures, smiled, and struck every right note.

"I was spitting," Lock said.

It was an eloquent, if unintended, summary of his entrance into the Broncos' starting lineup five weeks ago. With Lock playing, the coffee comes with sugar, the lights are green on the way to work, and the flowers sprinkle fragrances of rose and jasmine.

Pop and Lock. Lock before you Walk. Or simply put, the Kid has the job under Lock and Key.

The Broncos missed the playoffs for a fourth straight season, but they are no longer searching for a quarterback. Despite a greasy ending, Lock and a gnarly defense thwarted the Raiders in a rugged 16-15 triumph that came with notable footnotes on a refrigerated afternoon at Empower Field at Mile High.

--The Broncos delivered a winning home record for the first time since 2016 and posted their second best five-game finish in team history.
--Lock ended the season 4-1 as a starter.
--The Broncos squashed the Raiders' bid for the playoffs in their last game before beginning anew in Las Vegas.
--The Broncos allowed one touchdown in six red-zone trips by the Raiders
--And Phillip Lindsay became the first undrafted free agent to eclipse 1,000 yards rushing in each of his first two seasons.

"It feels good, but it was a tough one. It was probably the toughest 1,000 yards I’ve ever had to get in my life, when it comes to football," Lindsay said after rushing for 1,011 yards. "Everything happens for a reason and I got to showcase my toughness and my ability to be an every-down back. Now, I just need to go build on this. I need to look at myself in the mirror and find ways to get better in the passing game, the blocking game, and the running game. I want to be an elite running back and I want to be a top five running back in the league.”

Of course, these are the Broncos, so nothing came easily. Denver foiled Oakland's two-point attempt with seven seconds left to secure the win. The unflinching drama arrived after a Garett Bolles' penalty turned a makeable field goal into a missed 57-yarder. Not long after Raiders receiver Hunter Renfrow wrestled the football away from Isaac Yiadom at the 6-yard line with 16 seconds left. Yiadom went volcanic, drew an unsportsmanlike conduct penalty and headed to the bench. Renfrow then knifed into the end zone on a slant route for the score. The Raiders stayed bold, going for the win with a two-point conversion. Derek Carr zeroed in on Renfrow, but Shelby Harris batted the pass down to seal the victory.

"You have to make a play. You knew it was going to be a quick pass and it was going to be pretty tough to get a sack on that, so you have to do the next best thing and knock the ball down," said Harris, who reiterated that he would like to re-sign with the Broncos as a free agent if a deal can be worked out. "I saw his eyes, and there was good coverage and good pressure, and I just batted the ball. It’s a team thing, and it was just a great final play.”

The Broncos trailed early, unable to match the Raiders' energy and intensity. That gradually changed as Oakland grew increasingly frustrated, channeling their anger into penalties. The Broncos produced a stop with time expiring to finish the season with seven wins in their final 12 games. The ending was marred by a fan incident. A juvenile, possibly as young as 12 according to sources, ran onto the field and was flattened. However, one of the security guards pursuing him fractured his ankle in three places and left on a cart.

The delay couldn't extinguish the joy.

Lock brings hope for the future. He completed 17 of 28 passes for 177 yards with a touchdown. He ended the season with seven scores and three interceptions., and his four wins tied John Elway for most by a Broncos rookie. He plans to talk with Elway and future Hall of Famer Peyton Manning about how he can maximize the offseason. Manning, who has known Lock since the former Missouri star attended his passing academy, provided advice that paid off before the Houston road game a few weeks ago.

"We are a young offense, precocious and full of wonderment," said Lock, who plans to live and train in Denver this offseason. "There’s probably going to be some quarterbacks that used to play here for the Denver Broncos that I might give a call and ask what their plan was going ahead, what did you do with your receivers, when did you get them together, when did he feel it was a good enough time to let everyone have a little break and then bring everyone back and focus. I’m going to make a couple phone calls and talk to some guys who were pretty good at this position and hopefully by the time I have those phone conversations in the next couple weeks, we’ll be able to have an intact plan."

Playing with purpose with no hope of the playoffs, the Broncos received a break on their first defensive series. After an impressive opening drive, the Raiders buckled as Carr overthrew a wide-open Renfrow in the end zone. Former Colorado Springs prep star Daniel Carlson followed by hooking a 39-yard field goal attempt.

Players talked during the week about the importance of delivering the first punch, putting Oakland on its heels. Instead, the Broncos found themselves tasting leather. Oakland's first two drives were impressive, though only one resulted in points. The Broncos benefited from a missed field goal, but fell behind 3-0 after tight end Darren Waller raced 75 yards on a delayed screen on third-and-9. Carlson split the uprights on a 23-yarder. The Raiders mauled the Broncos in the opening period, outgaining them 128 yards to 24.

The Broncos responded early in the second. Lock connected with Courtland Sutton on a leaping 19-yard reception, then flipped him an 11-yard toss, setting up angry Brandon McManus' 43-yard field goal to even the score.

Despite a clumsy first half, the Broncos led. So it is when Lock is the quarterback, showing mobility increasingly required at the position. With temperatures dropping and interest waning, he delivered a five-play, 41-yard drive in 43 seconds. Lock scrambled for a first down, read blitzes and capped the march with a fake sweep and easy touchdown toss to Andrew Beck with 28 seconds remaining in the first half.

Denver held an advantage because of technology and toughness. Renfrow's 5-yard score was overturned, and on fourth down, the Broncos stoned fullback Alec Ingold at the goal line. The Broncos' secured their first lead after safety Trey Marshall's biggest play in Denver. Playing for the suspended Kareem Jackson, Marshall stripped Marcell Ateman and recovered the fumble, setting up the Broncos drive. It represented Denver's 17th takeaway. They entered Sunday ranked 25th in that department, and anything less than 23 next season -- a top 10 showing -- should be considered a disappointment.

Leading at halftime matters against the Raiders. They hit the snooze button at half. They finished the season with 27 third-quarter points, their third-fewest ever. They took the bagel in the frame as the Broncos extended their lead to 13-3. McManus remained stellar since Fangio deprived him of an opportunity to make history with the NFL's longest field goal, drilling a 51-yarder to open the fourth. Every point was required.

This will not be a memorable season by Broncos' standards, Fangio admitted. But it will be unforgettable if Lock reaches his potential.

"We’re done with this losing (bleep)," said Von Miller, who finished with eight sacks. "Next year is going to be our year and I’ll be ready to go.”

Next season's Broncos schedule came into focus. It features a chance to return to the postseason while boasting plenty of playoff opponents. As it stands, the Broncos home schedule will include: the Bills, Dolphins, Buccaneers, Saints, Titans and AFC West rivals the Chiefs, Raiders and Chargers. The road slate looks like this: Patriots, Jets, Falcons, Panthers, Steelers, and the AFC West.

The schedule is typically released in late April. There has been a lot of buzz that the Broncos could travel to London to face the Falcons. In this speculative scenario, Denver would be the visiting team, so it would not impact the Broncos' home dates.

The possibility exists that Chris Harris Jr. and Derek Wolfe spent their last day with the Broncos on Sunday. Both will be free agents along with Shelby Harris. Of the three, it's hard to see more than two returning. And nothing is certain. There have been no recent talks with the reps for the players. That is not uncommon because general manager John Elway doesn't bid against himself in the free-agent market. So, for now, all three are prepared to test the market.

Chris Harris wanted $15 million per season when he stayed away from voluntary activities in hopes of landing a long-term deal. He received a $3 million raise, but no extension. Harris has fit Vic Fangio's defense, taking on added responsibility to make other pieces fit. However, by his own admission, he has not had a Pro Bowl season. Will that drop his price? Harris told Denver7 that the Broncos offered him a three-year, $36 million deal before the trade deadline in October, but Harris passed on it. He hasn't ruled out returning but realizes he might have played his last game in Denver.

"We’ve got a quarterback now that I feel confident in that we can get it done. We’ve got a lot of guys on defense coming back, but of course the big decision is how I’m going to be playing and how I’m going to be used," said Harris, who played more outside than in the past. "This year I was used differently compared to how I was used my first eight years in the NFL, so I am definitely going to take a look at what I want."

There figures to be plenty of suitors, among those who make sense are the Eagles, Texans, Colts and Ravens.

Wolfe posted a career-high seven sacks in 12 games. Like Harris, he wants to retire a Bronco. He would like a two-year deal with a third-year option. But after making $9 million last year, the Broncos figure to come in lower than that. Can the sides bridge the gap? As for Shelby Harris, he might have priced himself out of the Broncos' range with a career-best six sacks. He made it clear after the game he would like to return.

And where does that leave free agent Justin Simmons? The Broncos had dialogue with his agent Todd France in training camp and early in the season, but nothing is active. Simmons can ask for $14 million per season with a straight face after a breakout season. He appears set to test the market. However, the Broncos can franchise tag him, a realistic scenario, keeping him on a one-year deal for in excess of $12 million guaranteed.

Sunday's announced attendance was 67,007, with 9,327 no-shows. The total absent was almost identical to last week and left 37,000-plus over the final three games. However, the strong finish and Drew Lock's emergence figures to temper concern about that figure as the Broncos have hope for the first time since 2016. ... Raiders tight end Darren Waller eclipsed 100 yards receiving in the first quarter. ... Denver’s offense is the second‐youngest unit in the league, averaging 25 years and 237 days old.