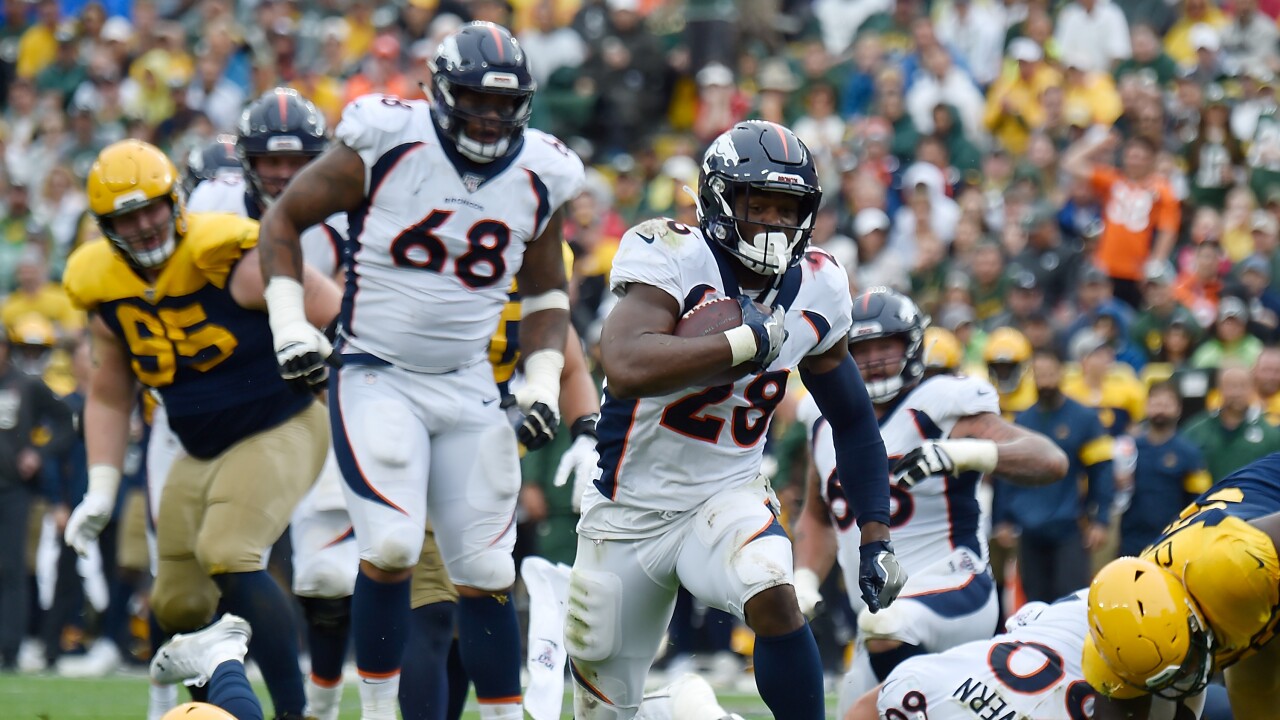 GREEN BAY — The collegiate, community feel begins early on interstate 41. Signs pop up for dairy farms, and, of course, cheese. There is no state like Wisconsin. No venue like Lambeau Field. Green and yellow splash every object, statues sit outside the stadium, and the place stops when the Packers play.

It's like going back in time. The Broncos wish they could buckle up in a capsule to take them back to 2015. It represents the last time they mattered in the NFL conversation. They played better on Sunday, but it was not reflected in the final score, a 27-16 loss in soggy conditions as they remained winless on the season.

"It's a tough one. We have great players on this team, great coaches. That usually leads to wins. I have been on teams before when we couldn't do anything right. We were missing this, and this and this. I don't feel like we are missing anything," All-Pro outside linebacker Von Miller said. "We have to go out there and play. I have to find a way to play better. I have to get sacks and do my job. It's just tough. I have never liked losing since I was a little kid. Same now."

SOUND OFF: Whether it's a gripe about a play or a bad call, we want to hear from you on Denver7 Broncos hotline.

The Broncos have no margin for error, no room for mistakes, no Clinique to cover their blemishes. Despite their best first half offensively, despite responding to a punch to the jaw, the Broncos remain in the AFC basement needing a telescope to see the contenders. They are 0-3 for the first time since 1999 and based on statistics, almost hopeless given the 3 percent chance of making the playoffs with this start. Denver's seventh straight loss dating to last season crystallized during a five-minute stretch bridging the second and third quarters, leaving them one win shy of 500 all-time and stuck on zero at Lambeau.

"Times are rough. Obviously the last three years -- it's been tough," said Emmanuel Sanders disappointed by a holding call, and receiving four targets with two catches. "We are trying to get it right. We are living in a world of suck."

The Broncos, who turned the ball over once in two weeks, coughed it up twice inside their territory. A Preston Smith strip-sack of Joe Flacco and a mugging of Noah Fant fumble contributed to 14 Packers points. Denver, meanwhile, had no sacks and produced no takeaways for the third straight game.

"It's three games in a row, and it's not good obviously," coach Vic Fangio said. "Some of it is the circumstances of the game, to a degree. This game was, in some ways, similar to our first two. "Until we can stop teams more decisively and score more points (and take leads), teams are going to play us this way."

Added Flacco, "Obviously the turnovers hurt. And they were simple things. A five-step go route to Courtland (Sutton), and a strip-sack," Flacco said. "We just have to find a way to put it all together."

Down 24-10 midway through the third, the Broncos continued their bare-knuckle offensive assault. Their third double-digit play scoring jaunt culminated with one of the Broncos' best plays this season. On fourth down from the 1-yard line, Phillip Lindsay took the handoff. Dean Lowry hit him, knocking Lindsay off balance. He kept chugging, and as he leaned toward the end zone guard, Dalton Risner flung him into the end zone as if he was wrestling a steer. The former Colorado prep stars breathed life into a gasping sideline. The Broncos trailed 24-16 as the rain began to pour late in the third quarter.

A third Broncos' turnover followed moments later after a Joe Flacco 52-yard strike to Sutton. Flacco was hit as he threw, his wobbly pass intercepted by safety Darnell Savage upon further review. Flacco explained that he tried to stop his motion leading to the awkward toss. The Packers answered with an 11-play, 7 minute, 47-second drive. Mason Crosby's field goal lifted Green Bay ahead 27-16 with just under six minutes remaining.

The Broncos' failure to launch would be funnier if it were a romantic comedy. The reality is sobering. The Broncos found themselves down 7-0 after Aaron Rodgers lofted a 40-yard touchdown pass to Marquez Valdes-Scantling. It was a weird play as Bradley Chubb and Miller appeared to jump offside, causing hesitation from the defense. The free play came at an extreme cost to the Broncos. The Packers touchdown left Broncos outscored 21-3 in the first quarter this season at that point.

"We knew he was going to (go deep) that if that happened," Fangio said.

Receiver Diontae Spencer applied jumper cables to the latest dead battery start, zooming 60 yards on a kick return with his Rick Upchurch routine. The Broncos responded with minus-4 yards. For once, it was not foreshadowing.

Trailing 7-0, the Broncos responded with their most impressive drive of the season. It was part Air Force, part Monarch High. They might as well have run the Wing T with way Denver gobbled the clock. The Broncos chugged 77 yards on 15 plays, featuring a steady diet of Lindsay on the ground, and Sutton through the air. Lindsay punctuated the drive with a 1-yard scoring plunge behind impressive blocks by Ron Leary and Elijah Wilkinson.

"We did some good things blocking in the run game," said left tackle Garett Bolles, who rebounded with his best game of the season, drawing zero holding calls for the first time. "We have to continue to fight. We can't give up because the outside noise tells us that we suck. We don't care about the record. We have to learn from our mistakes and get a win."

After a Packers field goal, the Broncos rolled up their sleeves only to have the lunchpail crunch their fingers. It's hard to have confidence without results, but feeding off their last drive the Broncos sauntered 63 yards on 15 plays. With the run working -- 91 yards on 20 carries -- the Broncos achieved balance, and briefly a lead. Royce Freeman, who returned after a shoulder issue, bounced 18 yards for a touchdown. Refs negated the score with a phantom holding call on Emmanuel Sanders against Jaire Alexander, who threw his hands in the air as if hooked. The official fell for the banana in the tailpipe. The Broncos settled for a 30-yard Brandon McManus boot, knotting the score at 10 with 3:50 remaining in the half.

Then, a real banana peel appeared underfoot. Smith raced around Wilkinson, swatting the ball out of Flacco's hand. The Broncos appeared to recover twice before the ball squirted to a Packers player. Two plays later, Green Bay's Aaron Jones darted in from 7-yards out, shoving Green Bay ahead 17-10.

The Broncos dominated the first-half stats. They ran 36 plays to Green Bay's 26, collected 11 first downs and were 4-for-7 on third down. Yet, without a turnover or a sack, the Broncos operated with no margin for error. The first half was marred by Derek Wolfe's ugly right ankle injury. The veteran defensive end left on a cart as his teammates high-fived him. He was immediately ruled out. He told Denver7 an X-ray revealed no fracture. He will get an MRI on Monday.

Improvement exists. But it remains a tough sell to players who haven't won since Dec. 2.

"It's our job to go to work," defensive lineman Shelby Harris said. "I have confidence in all the guys around me."

Footnotes
Bryce Callahan did not play on Sunday, and there's no timetable when he will be available. The cornerback's foot injury, which he aggravated on July 27, continues to linger. He broke his foot, specifically the fifth metatarsal, in December. He appeared on the right track after signing as a free agent in March. However, the latest setback has some teammates wondering when he will play. ... The Broncos gameday captains were longsnapper Casey Kreiter and receiver Emmanuel Sanders. No defensive rep. ... Finally given a chance, cornerback De'Vante Bausby showed well with a pair of third down stops in the first half. He earned more playing time with his performance. ... Bradley Chubb tied a career-high with three tackles for a loss. ... Said Chris Harris Jr., "We have a new coach, some new players. I have ultimate faith we can turn it around." ... Linebacker Josey Jewell appeared to suffer a leg injury late in the game.