The case for Broncos taking quarterback with fifth overall pick 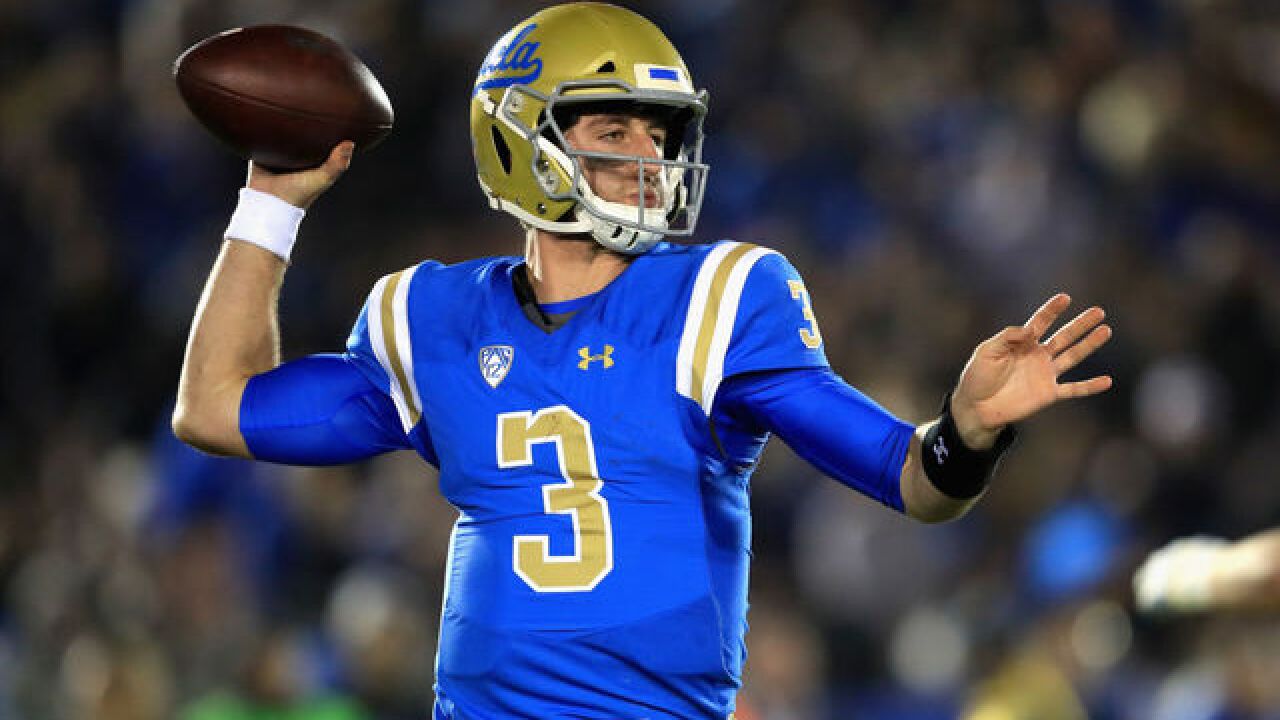 2017 Getty Images
Sean M. Haffey
<p>PASADENA, CA - NOVEMBER 11: Josh Rosen #3 of the UCLA Bruins passes the ball during the second half of a game against the Arizona State Sun Devils at the Rose Bowl on November 11, 2017 in Pasadena, California. (Photo by Sean M. Haffey/Getty Images)</p>

DENVER -- On Wednesday, the Broncos hosted UCLA quarterback Josh Rosen for a visit. At Denver7, we considered the merits of a photographer capturing Rosen walking into the Dove Valley facility. It was determined such treatment remains reserved for Peyton Manning.

Still, Rosen's arrival in Denver continues to stoke the fascinating conversation surrounding the Broncos this month: Will they take a quarterback with the fifth overall pick in the upcoming draft?

General manager John Elway told me after the Case Keenum press conference -- remember, he's the new starter on a two-year deal with $25 million guaranteed -- that the team planned to visit with the top signal-callers. As such none of their meetings and travels to see Rosen, Josh Allen, Sam Darnold and Baker Mayfield should come as a surprise. The Broncos have been nothing if not consistent. They could select a quarterback if they fall in love with one. They also know they need to look like they will select a quarterback -- it is the smokescreen and allergy season after all -- to increase leverage if another team like Buffalo wants to trade up into the spot.

There's no denying what fans witness April 26-28 will become the most pivotal draft in Elway's tenure. He has guided the Broncos to five playoff berths, two Super Bowls and one championship in seven seasons. However, the Broncos need a caffeine boost after going 7-15 over their past 22 games, including 2-10 over their final 12 last season that nearly cost first-year coach Vance Joseph his job.

To avoid posting back-to-back losing seasons for the first time since 1972, the Broncos require multiple starters in the draft. Last spring went awry as only first rounder Garett Bolles contributed. The return of a healthy tight end Jake Butt and receiver Carlos Henderson could change how the class is viewed, but there are no guarantees.

Hitting on this draft class could shove the Broncos back to respectability, back to postseason. Which returns me to the quarterback question. A compelling argument exists take one, but how will that make the Broncos better this season?

Their entire mindset since last year's humbling failure has been to win now. Any quarterback selected arrives as a backup on a depth chart clogged with a former first round pick in Paxton Lynch, who appears to be in a make-or-break season with the Broncos. As it stands, he will be in a competition with Chad Kelly for the backup spot.

Yet, the intrigue remains. How can the Broncos not take their quarterback of the future? My look at how the top four could fit:

Baker Mayfield, Oklahoma: Mayfield brings accuracy, edge and attention. If the Broncos take Mayfield, they might as well rent a tent to place over training camp. Welcome to the circus. Every pass Mayfield throws will be followed by tweets that he should start. I told Elway that Keenum, in some ways, was Mayfield before Mayfield. Keenum was undersized, doubted in high school, college and the pros. He proved critics wrong emphatically last season. However, concern lingers he is the biggest one-hit wonder since Soft Cell's "Tainted Love." Mayfield has no interest in backing up anyone. He admitted as much multiple times at the NFL combine. Would that impact Keenum -- unlikely -- or the locker room (perhaps)? Mayfield could play right away with a creative offense similar to the run-pass option concepts employed by the Eagles and Chiefs. Again, Mayfield possesses unique talent. But how does him watching from the sidelines part or all of the upcoming season help the Broncos win? The caveat: Elway decides he wants part of his legacy as GM to be leaving Denver with his longterm solution at the position (either with Mayfield or one of the other in the top group).

Josh Allen, Wyoming: Allen won the offseason. Given the questions concerning his accuracy and underwhelming stats against moderate competition, Allen could not have done more over the past four months. He is the blueprint -- 6-foot-5, 237 pounds, with an arm that he told me has thrown a football 82 yards. Allen could use a year as an understudy so that makes more sense for the Broncos' situation with Keenum. That said, there's almost no chance Allen is available with the fifth pick. He's expected to go in the top three selections, and it would come as no surprise if Cleveland took him first overall.

Josh Rosen, UCLA: If former Bruins coach Jim Mora Jr. keeps talking about his California neighbor, Rosen could be available in the second round. I kid because I care. Mora, while being candid to apparently help steer him to the New York Giants, did Rosen no favors. He said Rosen needs to know why and to be engaged. It cast Rosen as a millennial and prompted questions about his commitment to football. Fair? I don't know. I know Rosen is the most polished, pocket-passer ready of any of the quarterbacks. He is an interesting case, and despite questions, I believe he goes in the top 3 picks.

Sam Darnold, USC: If you like Allen, you like Darnold. You might even love him because he has similar athleticism and size and delivered against top competition. Had Darnold left school after the Rose Bowl against Penn State, I have no doubt he would have gone first in the draft. Turnovers last season create pause. He embraces the idea of going to Cleveland. I root for him. But I don't wish the Browns on anyone given their graveyard of young quarterbacks over the last 20 years.

The quarterback most connected to the Broncos remains Mayfield. He makes this process bubble with interest more than any of the other candidates. I don't see it. Not because of Mayfield, but rather the Broncos' multiple needs. If defensive end Bradley Chubb or, in an upset after a run on quarterbacks, running back Saquon Barkely is on the board, it's hard for me to fathom the Broncos passing. Chubb, despite playing in a 4-3 scheme in college, would provide an immediate impact in the pass rush. The Broncos finished with 33 sacks last season, ranking 22nd overall (yes, it did not help that Denver rarely played with a lead). Barkley would inject a home-run hitter for an offense that sorely needs playmakers. The idea of him as a four-down player is silly. No team is going to expose its starting running back to consistent work on kick and punt returns. Still, Barkley's explosion would be tempting if he's on the board.

As planned, the Broncos have kept all options open this offseason. They could take any of the aforementioned quarterbacks. But it doesn't mean they will.