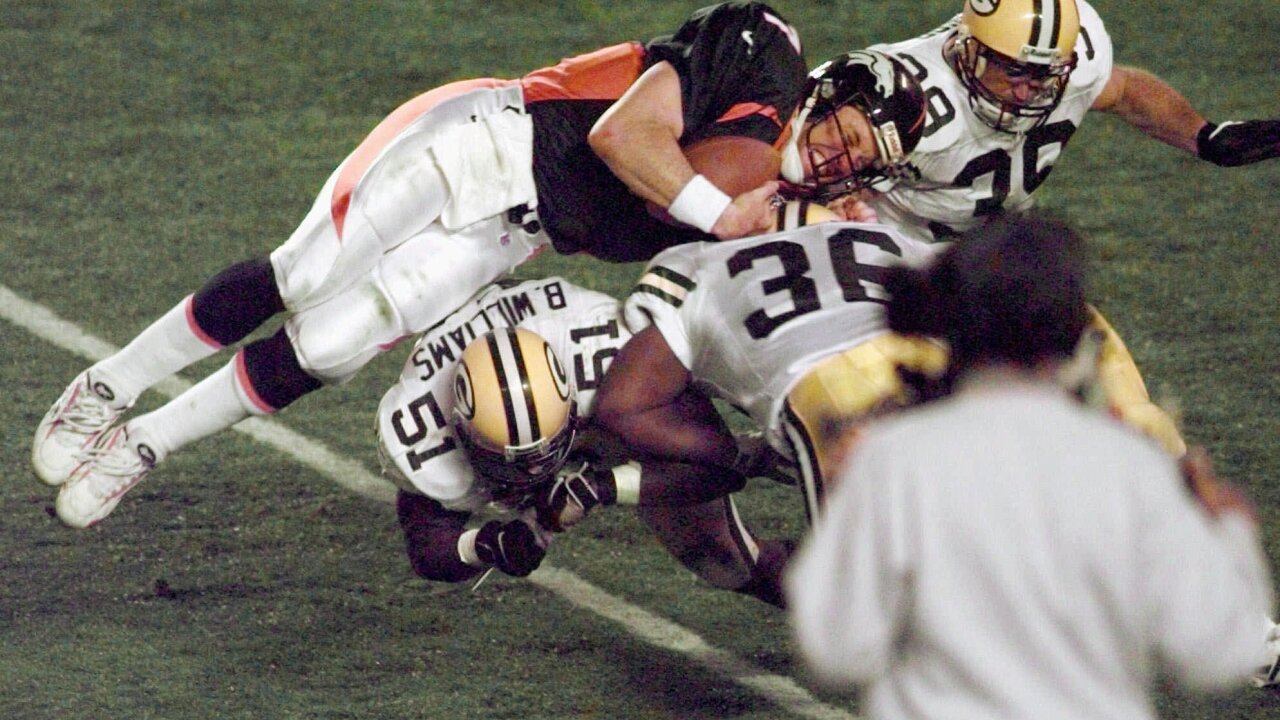 Elaine Thompson/AP
File-This Jan. 25, 1998, file photo shows Denver Broncos quarterback John Elway being flipped by Green Bay Packers' Brian Williams (51) and Elroy Butler (36) for a first down during Super Bowl XXXII at Qualcomm Stadium in San Diego. Members of a special panel of 26 selected all of them for the position as part of the NFL's celebration of its 100th season. All won league titles except Marino. All are in the Hall of Fame except Brady and Manning, who are not yet eligible. On Friday, Dec. 27, 2019, quarterback was the final position revealed for the All-Time Team. (AP Photo/Elaine Thompson, File)

DENVER — The Broncos have had their struggles in recent years — including a rash of injuries this season — but it's not hard to find the high points in their history.

The franchise has been chock full of great memories, from Super Bowl wins and appearances to greatness at the quarterback position to sustained winning for decades.

We decided to compile the seven biggest moments in franchise history. We're fairly certain most Broncos fans will agree with these — at least the top three.

But lists are meant to be debated, so have at it:

It can sometimes be hard to measure the impact of a team owner (unless things aren't going good). That wasn't the case with Pat Bowlen.

Bowlen purchased the team in 1984 and turned into one of the greatest owners in NFL history and the greatest sports owner in Colorado history. Under Bowlen's leadership, the Broncos posted the same number of Super Bowl appearances as losing seasons — seven. Bowlen, who died in 2019 after a battle with Alzheimer's, demanded excellence, fostered a culture of winning and provided endless resources to help the Broncos compete for titles. Bowlen was ultimately elected to the Hall of Fame, joining John Elway and other team legends.

The Broncos had struggled to find a mainstay at quarterback after John Elway's retirement. Then the Indianapolis Colts moved on from Peyton Manning. Elway and the Broncos convinced Manning to come to Denver, and Manning proved he still had plenty left in the tank, tossing 37 touchdowns and leading Denver to a 13-3 record in 2012.

The Broncos would lose in the divisional round that postseason, but Manning came back even stronger in 2013, winning the MVP and leading Denver to its sixth Super Bowl appearance. Manning struggled in 2015, his final season, but the Broncos' stout defense powered Denver to its third Super Bowl title.

The Broncos didn't draft Elway. Fortunately, Elway had no interest in the team that did select him No. 1 overall in the 1983 draft, the Baltimore Colts. After Elway announced his intention to play baseball for the New York Yankees, the Colts traded him to Denver for offensive lineman Chris Hinton and quarterback Mark Herrmann to the Colts. Elway stuck with football, and the trade only changed the Broncos franchise forever.

The Broncos' win over the Raiders in the AFC Championship Game put Denver sports on the map. Denver was no longer the dusty old cowtown of the NFL, and the Broncos were going to their first Super Bowl. Denver would lose to the Cowboys, 27-10.

But before the 1977 season, the Broncos were a middling (albeit, popular) franchise that had never made the playoffs. Their postseason run under coach Red Miller was the beginning of three decades of success.

The Broncos returned to greatness as former player Gary Kubiak led the team to a third title and Von Miller led a historically great defense. Quarterback Peyton Manning, like another Broncos great, went out on top with a championship. But given the stage, it was Miller who played the game of his life, totaling 2 1/2 sacks and stripping the ball from Cam Newton in the fourth quarter to clinch the game. Earlier in the game, Miller had forced a Newton fumble that resulted in a touchdown. Miller was named Super Bowl MVP.

John Elway's final game was a good one: A second consecutive Super Bowl win and the game MVP award, after he threw for 336 yards against the Falcons. Denver won 34-19, becoming the sixth franchise to win back-to-back Super Bowls.

The first championship will always be the best championship. After three Super Bowl losses and early playoff exits, Elways got his Super Bowl ring with a 31-24 win over the Green Bay Packers. Terrell Davis earned game MVP honors, rushing for 157 yards and three touchdowns. But it was one run from Elway that Broncos fans might remember best.

With the game tied 17-17 in the third quarter, the Broncos faces 3rd and 6 from the Packers' 12-yard-line. Elway decided to scramble for the first down. When he reached the marker, he dove — and got spun like a helicopter by two Green Bay defenders. But Denver got the first down, and Davis scored two plays later to put the Broncos ahead.

During the trophy presentation, Broncos owner Pat Bowlen summed up how Broncos Country was feeling: "This one's for John!"