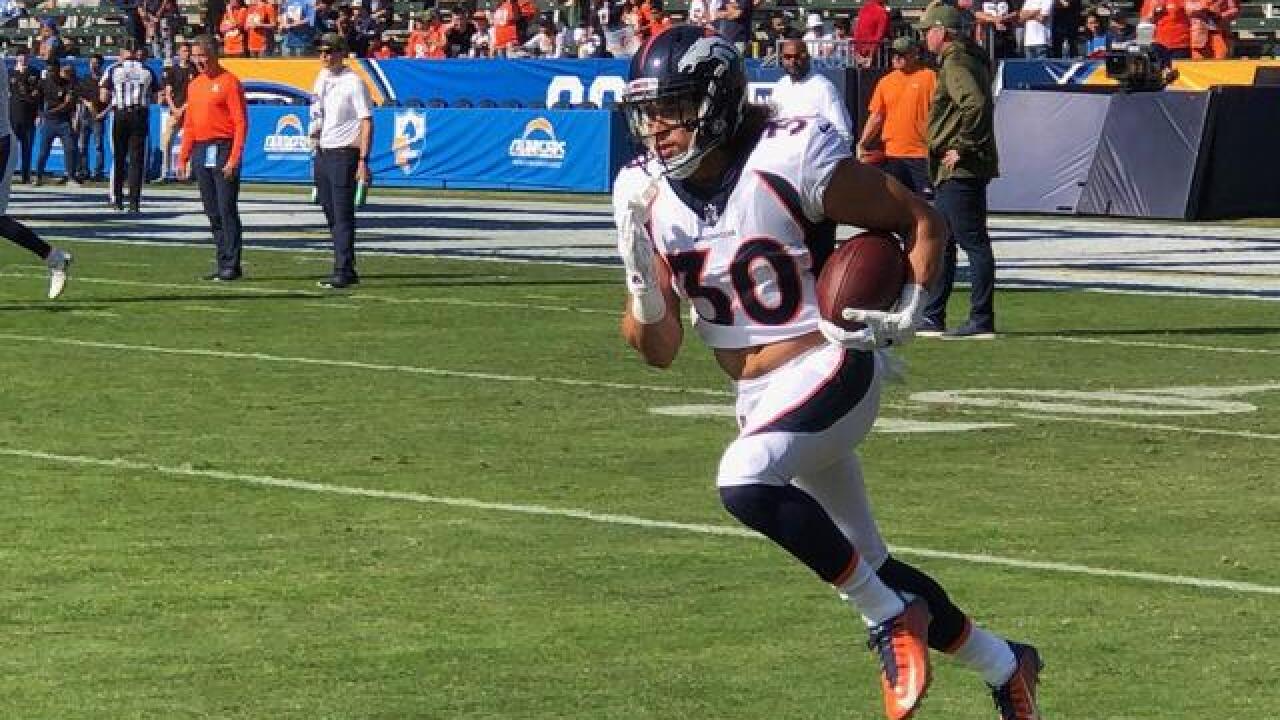 ENGLEWOOD, Colo. — With three minutes left in the game, I left the press box. I could no longer wait for the outcome with a live shot looming. I figured — full transparency — I would arrive on the field to discuss another eating-shards-of-glass loss.

By the time I navigated the StubHub Center — they have more security guards than fans — my eyes widened at the sight of the scoreboard. Not only did the Broncos have the ball, they had time. What was Philip Rivers thinking killing the clock to avoid the sack after the two-minute warning?

The Broncos, after trudging through mud offensively for three quarters, put together an impressive final drive for their first AFC West road win since 2015. Was it ugly? Yes. You know what they call ugly wins? Wins.

Philip Rivers entered the game with his most efficient stats. He used his mind more and his arm less. When he faces Denver, however, he becomes too amped. He forced throws, made mistakes. Two stood out. Halting the clock on the Chargers' final drive was an awful decision. It provided Denver roughly 40 additional seconds. And his pick to Von Miller flipped the game on its head. Strapped with a 19-7 deficit in the third quarter, the Broncos were gasping for air. Miller made the game's biggest play to revive the sideline.

The Broncos' defensive grunts earned criticism after the worst rush defense in back-to-back games in NFL history against the Jets and Rams. Everything is different now. They have allowed 78 yards per game on the ground the past four games, while providing an inside rush. Adam Gotsis netted a sack Sunday, and Denver was stout on first down.

Any talk of trading Von Miller is ridiculous. I don't care about the draft picks. You don't trade a first-ballot Hall of Famer in the prime of his career. Miller altered the outcome with his pick with a terrific diagnosis. He told me he had the running back in the flat. When no back wandered into a route, Von stopped and intercepted a wide receiver screen. He also netted his 100th career sack, and is on pace for 16 this season, while Bradley Chubb projects to finish 14.5, tying the all-time single-season rookie record set in 1999.

I See You, Phillip

Philip Lindsay is the Broncos' offensive MVP through 10 games. With 670 yards, Lindsay ranks second behind the Giants' Saquon Barkley (728). He sits two shy of Barkley in rushing touchdowns as well, 7-5. Barkley received a $15 million signing bonus. Lindsay received $15,000. The Broncos offense had nine first downs through three quarters. Without Lindsay, they had no chance.

I love that Vance Joseph remained aggressive on fourth down in the first half. Field goals lose road games. They should be able to secure a yard on fourth down. I liked the bravado, but not the formation without fullback Andy Janovich in the game. That questionable spot wasn't reviewable. Case Keenum's attempt on a two-point conversion was. I was shocked Joseph didn't throw the red flag. He said there was uncertainty in the view the Broncos had upstairs. So rather than risk losing a timeout, he stood pat. Joseph was defensive about the move after the game. He blamed the officials for not getting it right in the first place. That answer raised my eyebrows, but honestly, I didn't mind it because I am over the endless arbitrary calls in NFL games.

The Broncos didn't play great. They made a number of mistakes, including in coverage of ageless tight end Antonio Gates. But their aggression forced the Chargers into mistakes offensively. Los Angeles finished with a staggering 14 penalties. After the game, receiver Keenan Allen gave the Broncos no credit for the win, saying, "They suck." They also got the last word.

Case Keenum played poorly for 45 minutes. He threw high. He threw low. He refused to throw at all. He had 59 yards passing through three quarters. He had every chance to fold. But, he played his best when it mattered most. He completed five passes on the final drive for 86 yards. Keenum has not lived up to expectations, save for some sterling fourth quarters. He has completed 81 of 118 passes (68.6 percent) with a 91.9 rating in the final period.