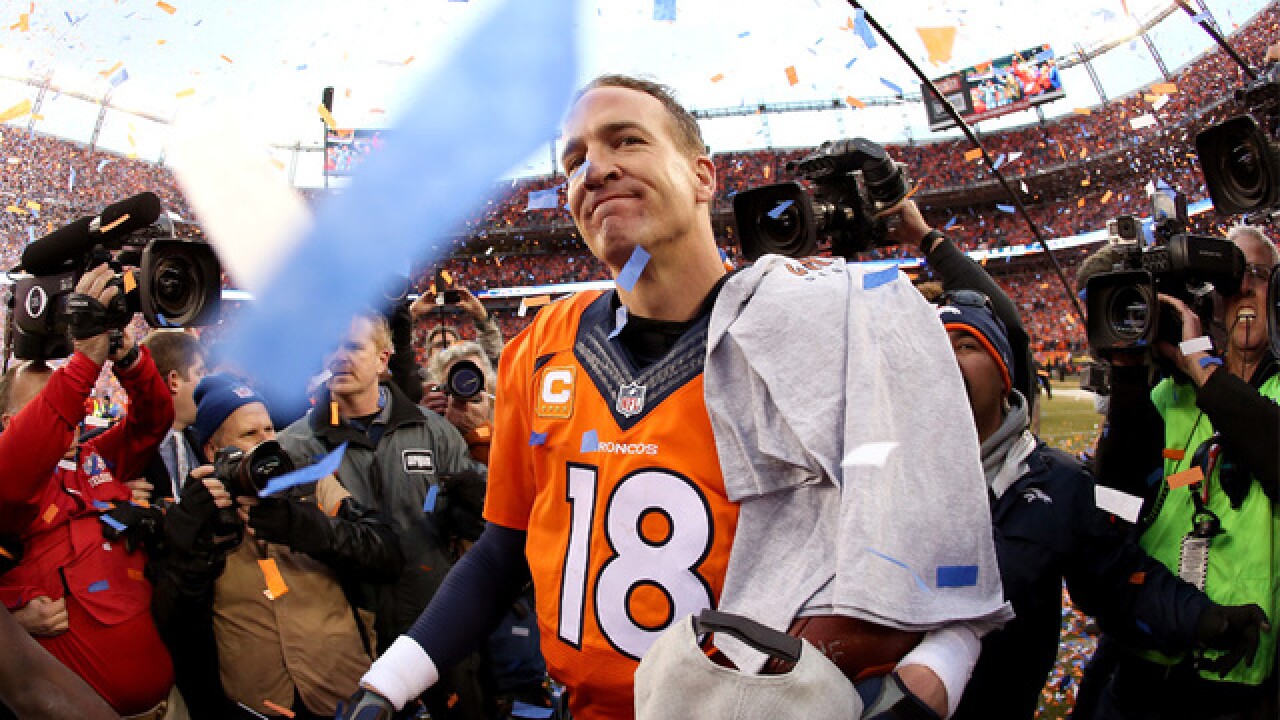 It was the question Denver Broncos' fans and Peyton Manning fans were asking for weeks -- "Would Manning retire after winning the Super Bowl?"

Sunday, the Broncos made it official, releasing a statement that said, "Quarterback Peyton Manning has informed the Broncos of his decision to retire from the National Football League following his magnificent 18-year playing career, including the last four seasons in Denver."

Read the full statement from the Broncos:

Quarterback Peyton Manning has informed the Broncos of his decision to retire from the National Football League following his magnificent 18-year playing career, including the last four seasons in Denver.

Manning, along with Broncos President & CEO Joe Ellis, Executive Vice President of Football Operations/General Manager John Elway and Head Coach Gary Kubiak, will be available to the media on Monday at 11 a.m. MT during a news conference at UCHealth Training Center.

Manning, who joined the Broncos as a free agent on March 20, 2012, after spending the first 14 years of his professional career with the Indianapolis Colts, is the only five-time Most Valuable Player in NFL history. No player in league history has earned more Pro Bowl appearances (14) than Manning, a 14-time team captain who finishes his career as the NFL’s all-time record holder in career touchdown passes (539) and passing yards (71,940).

The NFL’s career leader in combined regular-season and playoff wins (200) by a starting quarterback, Manning is the only quarterback in league history to lead two teams to a Super Bowl victory. He quarterbacked the Broncos to a win in Super Bowl 50 to end the 2015 season after earning his first World Championship with the Colts in Super Bowl XLI following the 2006 season.

During his four years in Denver, Manning helped the Broncos to the most wins (55) and highest winning percentage (.764) of any team in the NFL while becoming the first quarterback in team history to be part of four consecutive AFC West titles. No player threw more touchdowns (151) in the regular season/playoffs combined from 2012-2015 than Manning, who ranked third in the league in overall passer rating (99.6) as well as fourth in both overall passing yards (19,062) and completions (1,639) during that period.

In 2013, Manning posted the most prolific season of any quarterback in NFL history en route to earning his fifth MVP award and receiving Sports Illustrated’s prestigious Sportsman of the Year award. Manning, who helped the Broncos to their first Super Bowl appearance in 15 years, set NFL single-season records for touchdown passes (55) and passing yards (5,477) while leading the highest-scoring offense (606 pts., 37.9 PPG) in NFL history. Manning’s first season with the Broncos in 2012 saw him earn the Associated Press’ Comeback Player of the Year award for his remarkable return to the field from a neck injury that forced him to miss the 2011 season. He also finished as runner-up for league MVP after setting Broncos single-season records for every major passing category.

Selected by the Colts with the No. 1 overall pick in the 1998 NFL Draft from the University of Tennessee, Manning earned 11 Pro Bowl selections in 14 years in Indianapolis while being named to the NFL’s All-Decade Team for the 2000s.

In addition to his on-field contributions, Manning has been actively involved in the community throughout his playing career. His PeyBack Foundation, which was established in 1999 to promote the future success of disadvantaged youth, has provided more than $11 million of positive impact in the states of Louisiana, Tennessee, Indiana and Colorado. The recipient of numerous local and national recognitions for his community involvement, Manning is one of only eight players in NFL history to win all three of the league’s most prestigious community awards: the Byron “Whizzer” White Humanitarian Award (2004), the Walter Payton NFL Man of the Year Award (2005) and the Bart Starr Award (2015).

At the University of Tennessee, his alma mater, he created the “Peyton Manning Scholarship Program” that has provided for 25 incoming students in the last 18 years on the basis of academic achievement, leadership and community service.

Manning earned a bachelor’s degree in speech communications from Tennessee, where he set 33 school records, eight Southeastern Conference records and two NCAA records. As a senior in 1997, Manning led Tennessee to an SEC Championship while being recognized as a consensus All-American and runner-up for the Heisman Trophy. Peyton Williams Manning was born on March 24, 1976, in New Orleans, where he attended Isidore Newman High School. He finished his prep career with a 34-5 record in three seasons as a starting quarterback and was named Gatorade Circle of Champions National Player of the Year as a senior.

STATEMENTS FROM THE DENVER BRONCOS

“The Denver Broncos are so proud to have called Peyton Manning our quarterback for the last four years, and we can’t thank him enough for his many contributions to our team and community

“On the field, Peyton’s competitiveness, intensity and leadership helped us to one of the most successful periods in our history, highlighted by four consecutive division titles, two AFC Championship victories and a win in Super Bowl 50. Off the field, Peyton’s kindness and generosity, especially toward those in need, made a real difference on a very personal level.

“Our team, our organization and our community are all better because of Peyton Manning. He raised the performance of those around him and raised the level of excellence here at the Broncos.

“Peyton’s been a first-class ambassador who did things the right way and had such a positive impact on the Broncos. We look forward to celebrating his future induction into both the Broncos’ Ring of Fame as well as the Pro Football Hall of Fame.”

“When you look at everything Peyton has accomplished as a player and person, it’s easy to see how fortunate we’ve been to have him on our team. Peyton was everything that we thought he was and even more—not only for the football team but in the community.

“There’s no question that his work ethic is what made him into one of the great quarterbacks of all time. All the film study Peyton did and the process that he went through with game planning and understanding what the other teams did was second-to-none.

“Peyton was a player that guys wanted to play with. That made us better as a team, and I’m thrilled that we were able to win a championship in his final year. Peyton won a lot of awards and set a lot of records, but to me, what he helped our team accomplish during the last four years is what stands out the most.

“I’m very thankful Peyton chose to play for the Denver Broncos and I congratulate him on his Hall of Fame career.”

“It was a blessing to coach Peyton Manning. Nobody worked harder at the game and nobody prepared harder than Peyton. His preparation was the best I’ve ever seen with how he went about his business. There was nothing like his work habits. Each and every week, he did everything he could to get ready to play not only against the defense but even against the coordinator.

“After competing against Peyton many, many times, I already had great respect for him. But being with him this season, going through what we went through and accomplishing what we accomplished—that was special. He and I battled together and along the way we talked about dreaming that it could end the way it ended. And I’ll be damned, it did.

“Peyton and I will have some interesting stories throughout the rest of our lives to talk about going through this year together. He’s a Hall of Fame player and a Hall of Fame person, and I wish him all the best in the future."

Peyton Manning's extraordinary career was driven by his talent, an incredible work ethic, and an unwavering desire to be the best and ended so perfectly for him with a Super Bowl victory. Peyton's competitive fire and love of the game made him a legendary player who thrilled fans for a generation. He has served as a great representative of the NFL both on the field and in his community. We are forever grateful for Peyton's unmatched contributions to the game and know that his success will continue in the next phase of his life.