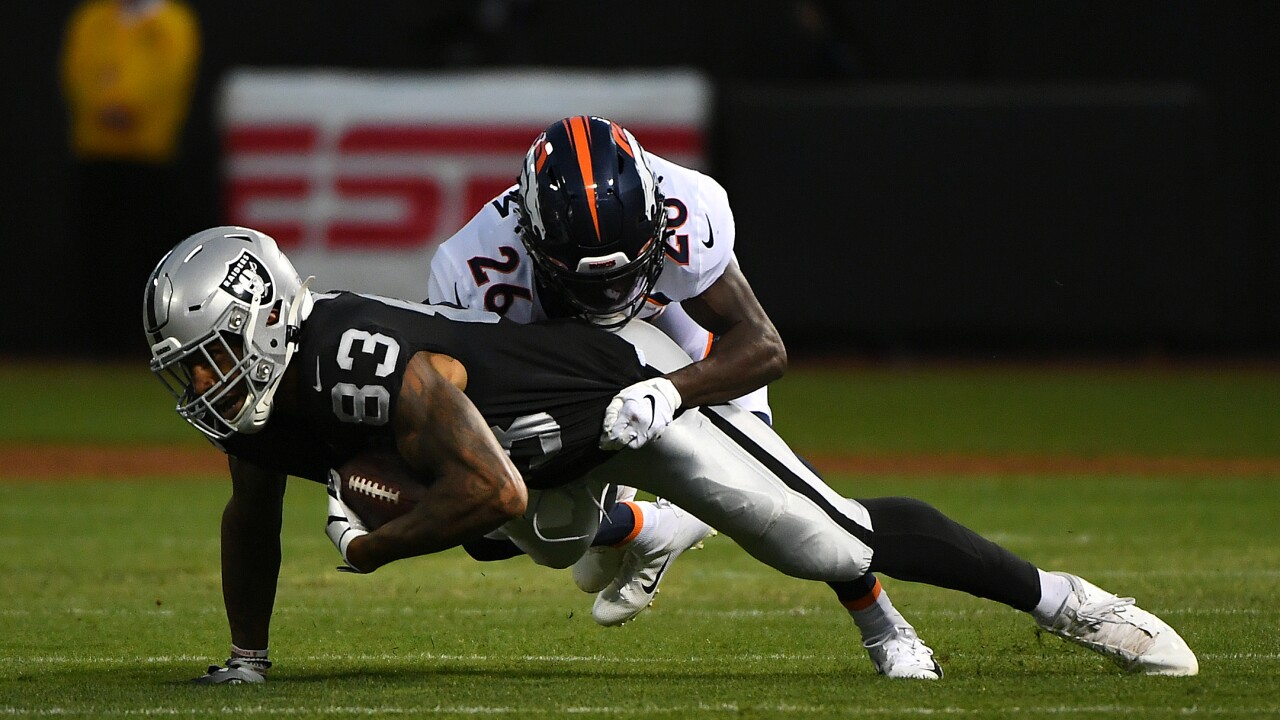 OAKLAND, Calif. — An hour before kickoff, the security guard cleared a path. Mama Lynch, Marshawn’s mom, FlavorTown mayor Guy Fieri, all moved aside as the Raiders rushed onto the field. In their haste, they nearly ran over Broncos coach Vic Fangio.

Consider it a trailer of the first game. The Raiders ravaged, pillaged, bulldozed and embarrassed the Broncos, running far enough away to prevent capture in a 24-16 win.

It prevented Denver from posting its 500th overall victory and represented the Broncos’ last game in the Coliseum. All fans in orange and blue can say one thing: Thank goodness.

It looked like the Broncos won a science experiment and stopped time. Why? Because you could have sworn it was 2018. Or 2017. The Broncos have not scored before half in Oakland since 2016, trailing 45-0 in those contests. That’s a problem for a franchise that is 5-47 when baking first half bagels.

The Broncos finally, mercifully answered, yet proved an old axiom: kicking field goals is the easiest way to lose away from home. They even decided on a boot when trailing 21-6 with 8:39 remaining. There was little to hold onto, save for the second-half ground game.

“I didn’t see much good in the red zone,” Fangio said. “That was really the big difference in the game.”

Denver answered on its first drive in the third quarter, avoiding the indignity of a shutout. The Broncos marched 67 yards on 12 plays. It resulted in a field goal, but the run game emerged from its hibernation. Phillip Lindsay and Royce Freeman gained traction. Brandon McManus drilled a 26-yard field goal.

The Broncos, finally in sync, kept mudflaps on in their next possession. Behind good blocks from DaeSean Hamilton and Dalton Risner, the Broncos moved into the red zone following impressive jaunts from Freeman (27 yards on a play where Gareon Conley injured his neck on a leg whip from Johnathan Abraham) and Lindsay. The Broncos had hope, had a balled fist, and it quickly dissolved as Hamilton dropped to a sure-touchdown pass. It was the single play on a night with many forgettable moments that sealed the loss. Hamilton retreated to the sideline in disbelief, uttering, “You are kidding me?” Another McManus 26-yard field goal felt empty.

The Raiders delivered a crushing punch to the throat in the fourth. Leading 14-6, they turned to rookie Josh Jacobs. He fueled the drive with a chunk play, setting up a Tyrell Williams third-down conversion and easy score for Jacons. The 21-6 deficit felt enormous for a Broncos offense that hasn’t scored a touchdown since last season.

Even when the Broncos answered, they produced more questions. Trailing 21-9, the special teams, an issue all preseason, Dwayne Harris raced loose on a 72-yard kick return. The Raiders grabbed a 24-9 lead, leaving anything else about fantasy league stats and gamblers following second-half spreads. For those who keep track of such things, Emmanuel Sanders scored the Broncos first touchdown with a little over two minutes remaining.

“I saw some really nice throws (from Flacco),” Fangio said. “And somewhere he didn’t want them to be.”

Despite a new coach, a new quarterback (Flacco) and renewed optimism, the Broncos in the opening half looked like the same old team that hasn’t sniffed a winning record in two seasons or a playoff berth in three.

The problems began early at an unlikely spot: Fangio’s defense. A year ago, Derek Carr completed 82 percent of his passes against the Broncos. He looked like Phil Simms in the Super Bowl in the first half, connecting on 16 of 17 passes for 178 yards and one score as the Raiders raced to a 14-0 halftime lead.

Carr is a good passer. But he was more accurate than a DNA test when targeting Isaac Yiadom. The second-year cornerback was inserted into the starting lineup with free agent addition Bryce Callahan sidelined with a foot injury he re-injured on July 27. He tested it pregame, but clearly wasn’t ready. Hard to believe a compromised Callahan would have been worse than Yiadom. He allowed repeated first downs, including a 43-yard strike to Tyrell Williams on third-and-1. As Williams celebrated the chunk play that anchored a 13-play, 95-yard, 8-minute, 35-second drive, the raucous crowd chanted “F---- A.B.!!!”

For Denver, the disappointment was raw and real. This year was supposed to be different. But on Monday night, the only thing that changed was the calendar day.

Broncos: RT Ja'Wuan James left the game in the first half with a knee injury. ... WR Tim Patrick left in the second half with a hand injury.

Raiders: CB Gareon Conley was taken off the field strapped to a stretcher with a neck injury after being hit in the head by teammate Johnathan Abram.

Conley was down on the ground for several minutes with players on both teams kneeling on the ground out of concern. Conley was taken off the field on a stretcher but was able to give a thumbs up to the crowd.

Broncos: Host Chicago on Sunday. Fangio spent the past four seasons as defensive coordinator for the Bears.

Raiders: Host Kansas City on Sunday in a second straight division matchup. The Chiefs have won eight of the past nine games in the series.