Quenton Nelson makes quite an impression during NFL combine presser 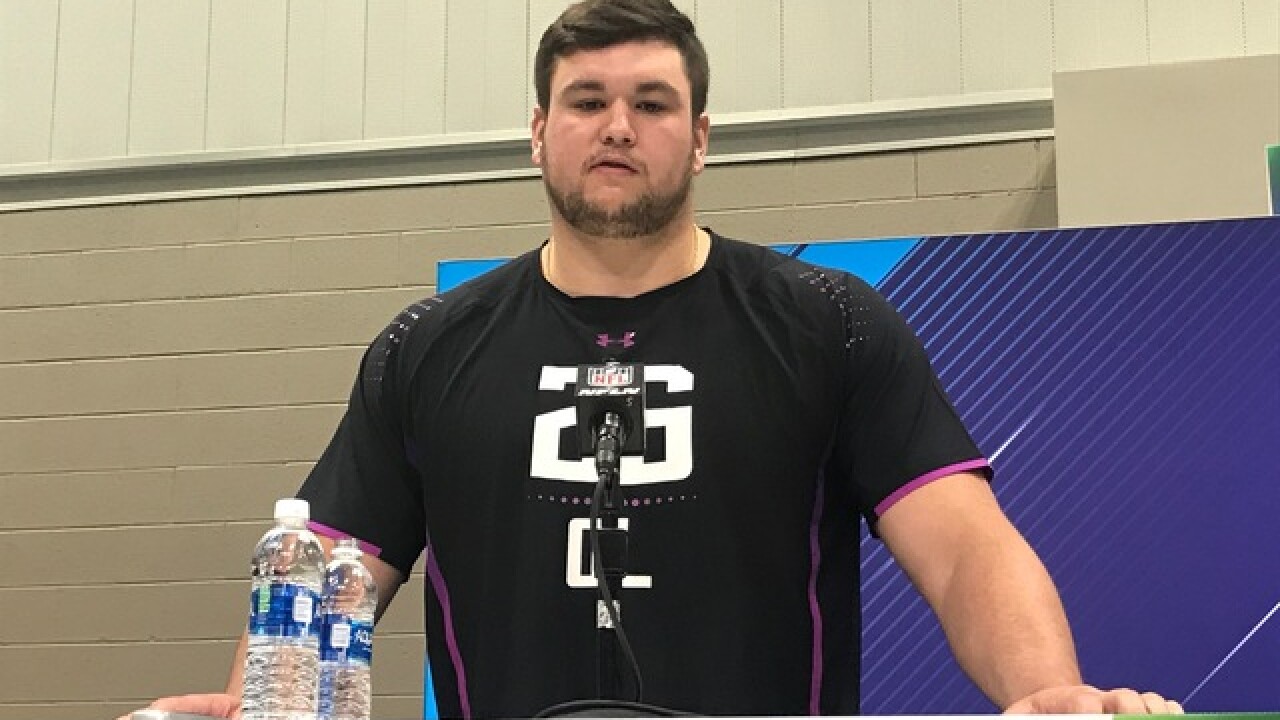 INDIANAPOLIS -- In a bland Indiana Convention Center ballroom dressed up with league signs, name placards and featuring a soundtrack of bench press grunts, Notre Dame guard Quenton Nelson stepped to podium 1 at the NFL combine on Thursday -- and walked over the competition.

Dressed in black and purple official Under Armour combine gear that fit as if it were part of the Baby Gap spring collection, Nelson described his style of play.

"As a blocker my mindset is to be dominant. I want to dominate all of my opponents. I want to take their will away to play the game by each play finishing them past the whistle," Nelson said. "Yeah, I would consider myself a nasty player. Clean. But nasty."

The monotone voice represents a juxtaposition to his layered skillset. Nelson, who grew up in New Jersey as a New York Giants fan, features strength, balance, and advanced technique. He ranks among the best players in the draft, and he is, without modesty, "the best lineman" available.

Click on Nelson's YouTube highlight clip and hide the children. He jabs jumping rushers, pancakes others. He demonstrates breathtaking strength. Probably because he's so strong. He benched 225 pounds 35 times Thursday, second only to UTEP guard and resident mauler Will Hernandez's 37 reps.

Nelson is attempting to become the first guard to go in the top five since Leonard Davis went No. 2 overall in 2001. If the Broncos selected Nelson, he would start Day One, replacing Max Garcia. Denver needs offensive line help, and is seeking to add a right tackle and guard in free agency or the draft. Hernandez might be a better fit given where the Broncos' pick in the early second round, though there's no guarantee he will be available.

Nelson will not have to wait long for his named to be called on April 26.

“I think I should be talked about in that regard — in the top-five conversation — because you have guys that are dominating the NFL right now in Aaron Donald, Geno Atkins, Fletcher Cox, that have just been working on interior guys. And you need guys to stop them,” Nelson said. "I think I’m one of those guys. You talk to quarterbacks and they say if a defense end gets on the edge, that’s fine. They can step into the pocket and make a throw. That’s what I give – a pocket to step up in. I also think I help the offense establish the run with my nastiness, and establishing the run also opens up the passing game. So I think it’s a good choice."