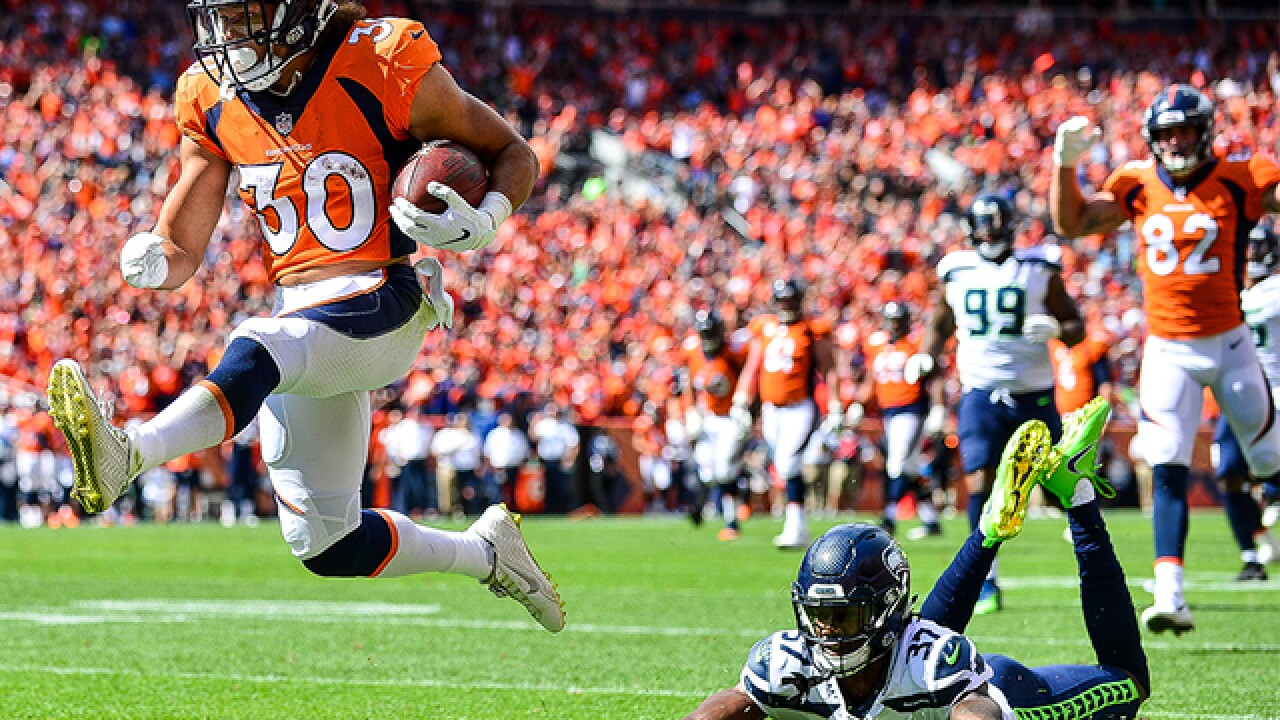 ENGLEWOOD, Colo. -- As the Broncos enter the third week of the NFL season, they are inching dangerously close to relevance. They are one of seven undefeated teams. They own a pair of fourth quarter comebacks, and possess an infusion of youth that brings promise.

My Denver7 Takeaways from the Broncos' dramatic 20-19 win over the Raiders.

For a team to rebound from the depths of 5-11 -- and the spiral was real -- it needs surprises. None ranks bigger than Phillip Lindsay. He is the only undrafted free agent to eclipse 100 yards from scrimmage in his first two weeks. He sits third in rushing with 178 yards, while playing a prominent role on special teams. Joseph said Monday no plans to make Lindsay the starter, saying it was unnecessary because he will contribute regardless of depth chart.

Case Keenum hasn't played well in the first halves. He owns a 65.4 rating, completing 20 of 35 passes for 272 yards, two touchdowns, three interceptions and one sack. However, he has played his best when it matters most. That's a special quality for a team seeking a leader. Keenum has completed 14 of 20 passes for 176 yards, one touchdown and no picks for a 113.8 rating in the fourth quarter.

The Broncos have a closer. Now, they need him to work well as starter.

3) The defense is different

The Broncos prided themselves on limiting yards, ranking tops in multiple categories for years. It's not 2015 anymore. The Broncos have shifted their focus to elasticity. They bent but didn't break Sunday. As cornerback Chris Harris Jr. explained, "It's about points allowed. And if we keep opponents to 19 points we are going to win a lot of games."

4) Sutton is on the verge

With veteran Demaryius Thomas struggling with drops -- he has four by my count through two weeks -- it would not be a shock to see Courtland Sutton's role grow as the season advances. He had two big plays called back on Sunday. He is on the verge of a breakout game.

5) The depth is real

Last year, the Broncos 2017 ghost draft class left them with no quality depth. This season, the Broncos are younger and healthier. And kids bring energy, caffeinating the team. Besides Bradley Chubb, Phillip Lindsay, Royce Freeman, DaeSean Hamilton and Sutton, linebacker Josey Jewell is starting to get some run. He played 13 snaps vs. the Raiders, slowly taking away time from Brandon Marshall as the Broncos use more of a three linebacker rotation in nickel coverage.

The Broncos are thin in the secondary. Derek Carr feasted on third corners Tramaine Brock and Adam Jones, leaning on Amari Cooper for easy completions. Jones should improve as his conditioning catches up. I am not sure on Brock. He looked vulnerable in training camp, and still does. Teams will look to exploit this matchup, especially when Denver is forced to shift its focus to the tight end.

Nothing good comes from passive behavior in sports. The Broncos will blossom with an aggressive mindset. They went for it on fourth down on Sunday and scored on Keenum's Keeper. Playing it safe will get this team nowhere. Keep taking chances, keep taking shots, and leave yourself in position to win it in the fourth.