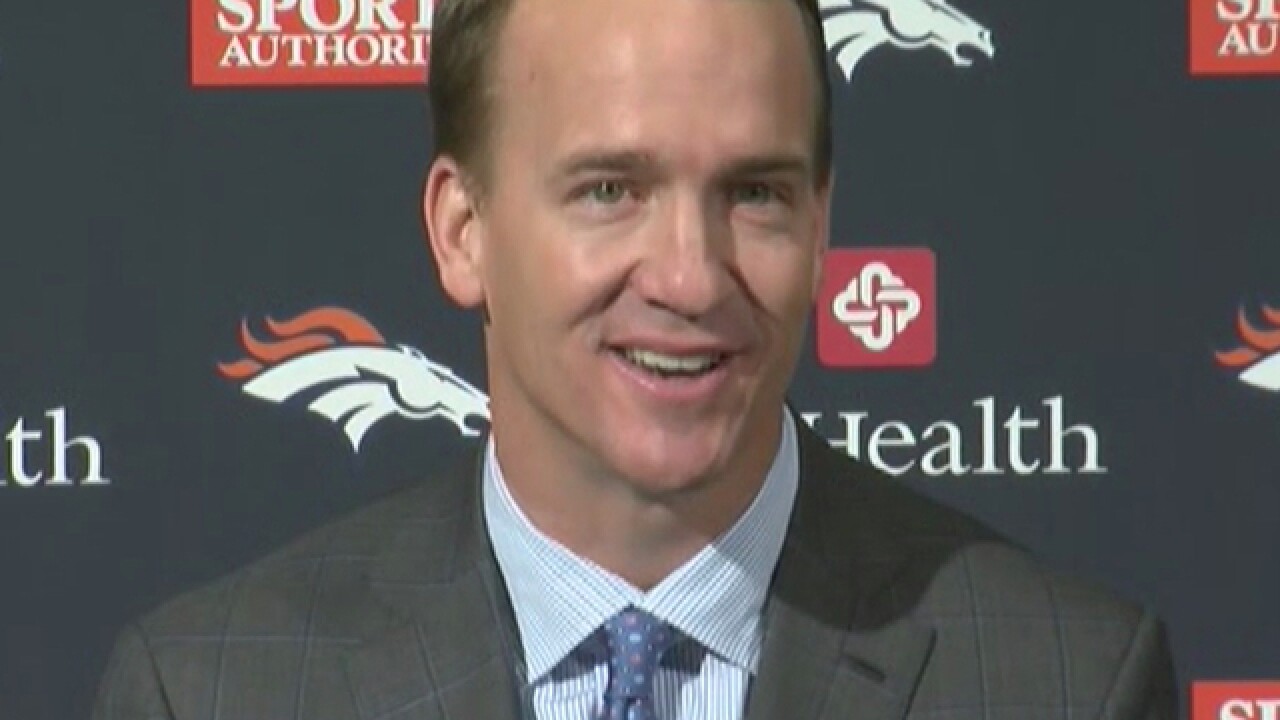 His voice cracking with emotion, Peyton Manning said good bye to the game he loved at a news conference packed with friends, family and laughter.

He threw in some Scripture, some fond memories and even a dig at Super Bowl 50 MVP Von Miller, whom he thanked for taking a break "from your celebrity tour to be here today."

He ended it with his signature "Omaha!" and then posed for pictures with more than a dozen of his former teammates with the Indianapolis Colts and Denver Broncos, each of whom he helped win a Super Bowl.

Manning, who turns 40 this month, said the timing was simply right to call an end to his 18-year NFL career.

He came to Denver on March 20, 2012, for the chance to win another title in the twilight of his career and GM John Elway had the blueprints.

Four years later, he hobbles away a champion just like his boss did 17 years ago.

Elway thanked Manning for coming to Colorado for the second chapter of his brilliant career, saying he made his own job easier, noting that with Manning living here, free agents were basically asking Elway "where do I sign?"

Manning went 50-15 in Denver, leading the Broncos to four AFC West titles, two Super Bowl trips, one championship and in 2013 guided the highest-scoring offense in league history - all after retraining himself to throw after a series of neck fusion surgeries forced him to miss all of the 2011 season and led the Colts to cut him.

Team president Joe Ellis told Manning, "If there is a list of achievements needed to attain greatness you've checked every box. ... We will miss watching you play quarterback. You have been a joy."

Elway was equally emotional when he walked away from the game after winning his second championship in 1999, and on Monday he said, "Having been through it, I know it's a hard day for him."

Indeed, Manning choked up several times, especially when he listed all the things he'd miss about football, the flights home after a big win, his teammates.

Coach Gary Kubiak talked about how Manning missed six weeks with a foot injury and how he worked his way back to regain his starting job in time to lead Denver on its historic playoff run.

Manning declined to address in detail a recent rehashing of a sexual harassment claim from his days at Tennessee.

"This is a joyous day and nothing could overtake this day. I think it is sad that some people don't understand the truth and the facts. I did not do what has been alleged. And I am not interested in relitigating something that happened when I was 19 years old. Kind of like my dad used to say when I was in trouble, 'I can't say it any plainer than that.' So, this is a joyous day. It's a special day. And like Forrest Gump said, 'That is all I have to say about that.'"

In the final moments of his retirement news conference, Peyton Manning really got choked up when he talked about how hard he prepared during his 18-year career.

"When I look back on my NFL career I'll know without a doubt that I gave everything I had to help my team walk away with a win," he said, voice breaking with nearly every word. "There were other players more talented, but there was no one who could outprepare me. And because of that I have no regrets."

He then paraphrased from the Bible: "I have fought the good fight. I finished my football race and after 18 years it's time. God bless all of you and God bless football."

Peyton Manning says nothing is going to overshadow this "joyous day," especially not something that happened decades ago.

In a new lawsuit filed last month that claimed a hostile work environment for women at the University of Tennessee, Manning was cited for his alleged harassment of a female trainer in 1996.

"It is sad that some people don't understand the truth and facts. I did not do what is alleged," Manning said. "I'm not interested in re-litigating something that happened when I was 19. ... Like Forrest Gump said, 'That's all I have to say about that.'"

Peyton Manning is going to miss quite a bit about football. Here are some he listed during his retirement news conference:

- Steak dinners at a place in Indianapolis after wins.

- Battles against players such as John Lynch and Troy Polamalu (to name a few).

- Going against coaches like Bill Belichick and Jeff Fisher, Rex Ryan (again, to name a few)

- Demaryius Thomas constantly telling Manning he loved him and thanking Manning for coming to town each time he caught a TD pass.

- The fans, even those in Foxborough and, "they sure should miss me, because they sure did get a lot of wins off me."

Manning talked about the struggles of his rookie season, when Indianapolis went to Baltimore - the Colts former home - and lost. Unitas shook his hand after the game and told Manning he was rooting for him.

Manning said that the words of Unitas, who died in 2002, stayed with him.

"I hope he knows that I stayed at it, and I hope he's a little proud of me," Manning said is starting off his retirement comments.

Peyton Manning's voice is cracking as he reminisces about his 18-year NFL career.

"There’s just something about 18 years… 18 is a good number," Manning said.

Manning said he is thankful for the time he spent in Denver.

"Grateful is the word that comes to mind when I think of the Denver Broncos," Manning said.

He's also using his wit to break the ice.

He noted that he still owns the NFL record for 28 interceptions as a rookie and says, "Every year I pull for a rookie to break that record."

He said little brother Eli might have broken it had he started all 16 games his rookie year.

Broncos coach Gary Kubiak says he's only coached Peyton Manning for nine months "but I'll remember it for a lifetime."

He also told a story about how he had several private meetings with Manning after Week 9 as he came back from injury. The two worked together to make sure Manning's presence helped the team and didn't cause any disruptions.

"I love you, buddy. I wish you the best," Kubiak said in closing.

Team president Joe Ellis calls it a "historic day for the Denver Broncos and the National Football League."

Ellis says Manning made the team, organization and the community better.

"I know this is a tough day for him," Elway said.

Peyton Manning has quite a few big names at his retirement announcement.

There are former teammates such as John Lynch, Jeff Saturday and Brandon Stokley. Demaryius Thomas and Emmanuel Sanders are chatting with Manning's wife and children.

Sitting in the front row are Manning's parents, Archie and Olivia, along with his brother, Cooper.

Also on hand is Bennie Fowler, who caught Manning's last pass on a 2-point conversion to cap Denver's 24-10 win over Carolina a month ago in Super Bowl 50.

Peyton Manning, this is your life.

And that doesn't include those in an overflow room where the news conference will be piped in for dozens of more reporters stationed outside the UCHealth Training Center.

The Broncos media relations department is limiting seating and issued orange stickers to the invitation-only event.

The Broncos have a couple of framed Manning No. 18 jerseys, one home and one road, and a game ball to present to the quarterback that lists his accomplishments during his four seasons in Denver.

The team has also produced a glossy program especially for the goodbye news conference that features Manning hoisting the Lombardi Trophy following Denver's 24-10 win over the Carolina Panthers a month ago.