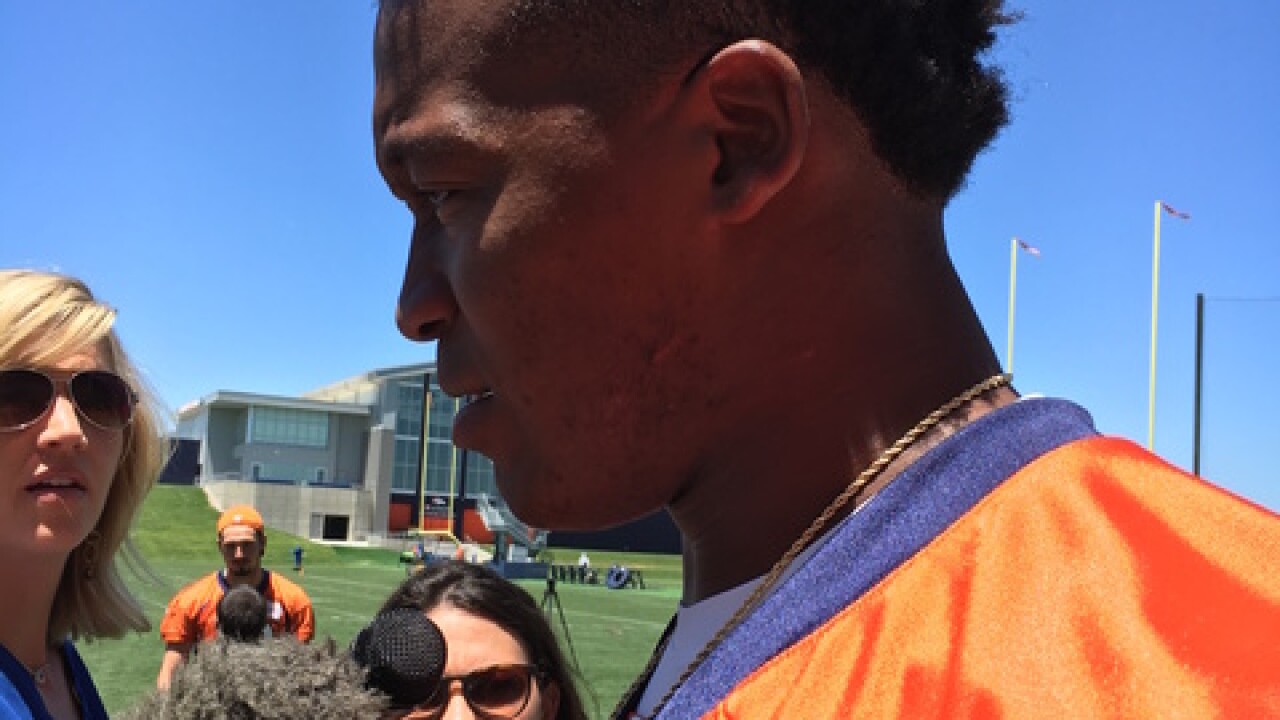 CENTENNIAL, Colo. -- Demaryius Thomas has teeth. He smiled Thursday. On the practice field.

On a day when Super Bowl 50 MVP Von Miller received the loudest applause from the fans and quarterback Mark Sanchez inched toward cementing his status as the starter, Thomas turned in the most impressive practice.

The importance of this can't be overstated for an offense running back C.J. Anderson admitted couldn't be much worse. With the sun splashing the Dove Valley practice field, Thomas ran left to right early in practice, catching a dart from Sanchez in stride before turning up the sideline for a huge gain. It resonated on multiple levels. He looked big, strong, fast, and, as opposed to last training camp, comfortable in the offense. His timing with Sanchez on multiple throws reflected his confidence.

Thomas seeks a reboot after a forgettable first year under a big contract. His franchise tag drama endured until the deadline, with Thomas signing a five-year, $70-million deal with $43.5 million guaranteed. He joined the Cowboys' Dez Bryant as the best paid. Expectations reached an inhaled helium high pitch.

Given the new frame of reference, Thomas didn't deliver. He finished with 105 catches, but his 12.4 yards per catch were the lowest of his career and his six touchdowns were his fewest since 2011. To put that in perspective, the Broncos defense scored six touchdowns. Mistakes haunted Thomas. No receiver is perfect, but Thomas' drops came in critical moments. He could have clinched a win over the Browns, for example, if a ball hadn't bounced off his hands. He undermined drives against the New England Patriots before finishing  Thomas finished with nine drops, fifth most in the NFL.

The explanation? He tried to do too much, wanting to turn 3-yard out into a 70-yard touchdown. He took his eyes off the ball as he zoomed upfield.

"No excuses. I have to be better," Thomas said.

Thursday represented an encouraging first step. No longer burdened by family issues -- his mother was released from prison last year and watched Thomas play in person for the time -- and a lingering neck injury from the Vikings game, Thomas looked like a mismatch.

"He was making all the plays," said receiver Emmanuel Sanders, who admitted his contract talks continue to percolate as he tries to secure a new deal "that's fair to me and the Broncos." "When you miss OTAs (as he did in 2015), it's tough. I know he's been getting a lot of criticism based on what he did last year. He made a lot of plays that helped us win games."

Coach Gary Kubiak was not surprised at Thomas' success Thursay. He texted Thomas in the days leading up to training camp, impressed by his preparation. As the Broncos look to repeat, they must improve offensively. A rebound from Thomas is a good place to start.

"He's very focused. He practiced really good. We have been talking about expectations. So yes I see a great focus from him," Kubiak said. "I think he was disappointed in some things but he still had a pretty darn good year. He's a big piece of the puzzle and we need him playing great."