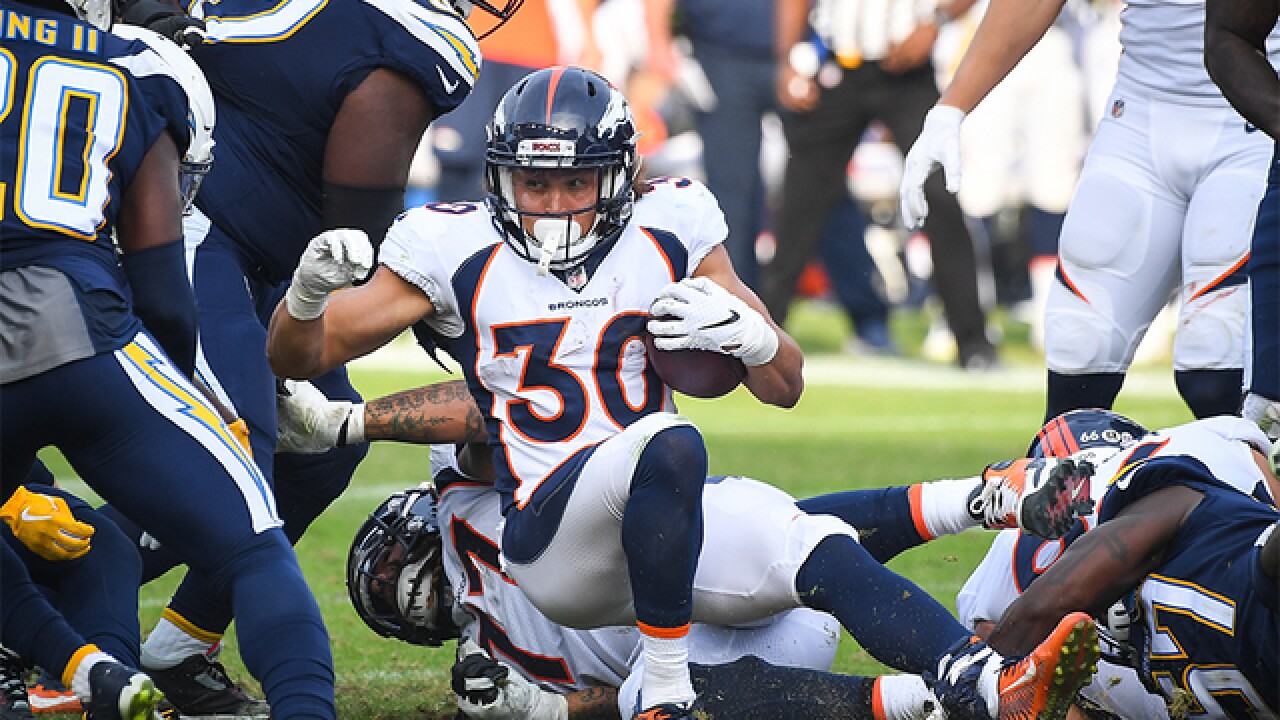 Copyright 2018 Scripps Media, Inc. All rights reserved. This material may not be published, broadcast, rewritten, or redistributed.
Jayne Kamin-Oncea
<p>CARSON, CA - NOVEMBER 18: Running back Phillip Lindsay #30 of the Denver Broncos gains 5 yards in the third quarter against the Los Angeles Chargers at StubHub Center on November 18, 2018 in Carson, California. (Photo by Jayne Kamin-Oncea/Getty Images)</p>

CARSON, Calif. -- Kleenex-required movies don't move the needle. Not this kind. Too corny. Too trite. And then came Sunday and the Broncos lived a script worthy of praise.

"This is a high you can't buy," explained quarterback Case Keenum.

It remains uncertain whether a nervy performance at StubHubCenter will alter the trajectory of their season. What is known: This sits as the most important win in coach Vance Joseph's tenure, a 23-22 victory over the scalding Chargers that is easier to appreciate than explain.

"We never quit. Resilient. That's the word I keep using to describe it," said kicker Brandon McManus, who converted a 34-yard field as time expired. "I woudn't say it's redemption (after missing a final kick against Houston). I would say it's a relief. It feels good."

All signs pointed toward another cheese-grater on the shins afternoon. The Broncos have a doctorate in how to lose games and influence the wrong people. They had not won an AFC West road game since Dec. 6, 2015. Their offense owned nine first downs through three quarters with Keenum straddled with 59 yards passing.

Then something weird happened. The Broncos benefited from another team's sloppy play -- Los Angeles collected 14 penalties for 120 yards and two Philip Rivers' interceptions -- and a masterful ending from Keenum. He has played his best in the fourth quarter for Denver. He had to because of the previous three, but no shade can be thrown his way after the final drive.

After Rivers inexplicably stopped the clock with an incompletion right after two-minute warning that gave the Broncos 40 extra seconds, Keenum went to work. He netted 86 yards on the march, completing 5-of-6 passes, his lone incompletion a spike. A 38-yard strike to Emmanuel Sanders, and a 30-yard slant to rookie Courtland Sutton proved the difference. That set up the McManus' field goal.

"We stuck together," said running back Phillip Lindsay, who rushed for 79 yards on 11 carries with two touchdowns. "We never stopped believing."

Coach Vance Joseph has become embattled over the last two seasons for a battery of losses and questionable decisions. He wasn't perfect. But the Broncos competed for him, and found a way, starting with Von Miller's third quarter interception, a game-changing moment that caffeinated his teammates.

"We didn't hope to win," Joseph said. "We made enough plays to win."

Added Miller to Denver7 after his 42-yard return, "I had the running back on that play. And when he didn't go into the flat, I stopped. I thought I had a touchdown. But I will take it because it led to a score."

It didn't start with rainbows. The Broncos followed an early blueprint that typically ends with them tumbling off a cliff. Play conservative. Act scared. Wander into the woods when hearing a howl and then get eaten by a villain.

Finally, mercifully, the Broncos let down their hair. What did they have to lose except for another game?

The Broncos went three-and-out their first two drives as the Chargers gobbled the clock like Pac-Man does dots. Denver's defense required SPF 50 for exposure to the bright sun at StubHub Center. The Chargers converted four of their first six third downs, holding the ball for 10 minutes, 51 seconds of the opening quarter. The Chargers dominated everywhere but the scoreboard.

The Broncos stiffened when needed, holding Los Angeles to a pair of long field goals. Down 6-0, Denver guzzled a Red Bull, ditched the khaki slacks and vanilla ice cream and began showing no fear.

The Broncos cobbled together a seven-play, 70-yard drive to secure a 7-6 lead. It was breathtaking because it represented a juxtaposition. From the Chargers' 41-yard line, the Broncos converted a fake punt on fourth down with a 4-yard pass from Colby Waldman to fullback Andy Janovich. What happened next created a Mentos soda explosion. Lindsay, who entered the game as the NFL's leading rookie rusher, bolted 41 yards for a touchdown. He creased the hole then added a little shake and bake for a score that delighted a sea of orange fans. He led the Broncos in rushing (48) and receiving (21) at halftime.

A potential defining moment arrived soon after but not with the expected outcome. Cornerback Chris Harris Jr. undercut a route on a ball intended for Tyrell Williams. It set up the Broncos to take a swig of confidence. On fourth down-and-1, the Broncos stayed aggressive, but lacked execution. With lead blocker Janovich watching from the sideline, Lindsay was stuffed by Jatavis Brown and Kyle Emanuel. Joseph screamed from sidelines that the Broncos converted. A fourth down spot is not reviewable, leaving Joseph no recourse.

Was it the right decision? In a vacuum, no. But viewed in context with a team that hasn't won a Sunday road game under this coach in two years and or claimed an AFC West road victory since Manning retired, it wasn't the worst idea. Of course, because this is a 3-6 team, the Broncos' mistake grew in stature. Without Peyton Manning to camouflage more blemishes than Revlon, the Broncos remained vulnerable. Rivers connected with Mike Williams -- one of the Chargers Tree receivers -- on a lob over Tramaine Brock.

The Broncos' effective elasticity snapped as Rivers made them pay. He sidestepped a Derek Wolfe sack -- the Broncos had three in the first half from Miller, Adam Gotsis and Bradley Chubb -- and lobbed a score to Keenan Allen. An ugly first half -- the Chargers collected 10 penalties -- ended with the Broncos' defense pressing hands on knees, but still owning faith.

After falling behind 19-7 in the third -- ageless tight end Antonio Gates schooled rookie linebacker Josey Jewell for his 12th touchdown in 28 games against Denver -- the Broncos appeared an easy mark.

I am not saying Denver's defense spent too much time on the field but Rivers and Gates were rookies when the game started.

And yet, the Broncos would not relent. Miller, who reached 100 career sacks Sunday which will be commemorated by the team in some fashion, told me this week he wanted to be more disruptive, to find ways to make plays when sacks were not available. With Broncos down to gasping breaths, Miller threw on an oxygen mask.

He diagnosed the screen pass, stopping and picking off Rivers and rumbling 42 yards. With a huge throng of Broncos fans going bonkers like the old South Stands at Mile High -- Domato Peko had 70 friends and family at the game -- Denver responded on the ground. Give the reshaped offensive line credit – center Connor McGovern flanked by four tackles because of injuries -- because the group did work. They all received game balls afterward.

"Usually when we get attention it's because of penalties or something we did wrong," McGovern admitted as life as a grunt upfront. "This is nice."

Royce Freeman delivered a 3-yard plunge to shave the Chargers' deficit to 19-14 with 2:28 remaining in the third. The Broncos found their way in the fourth with an inexplicable comeback.

Keenum connected on a 39-yard pass to Sutton. Lindsay, the Broncos' best player Sunday, darted in for a touchdown on direct snap, shoving Denver ahead 20-19 with 12:20 remaining. The Broncos went empty backfield and Keenum came up short of the goal line on a draw. Joseph said he didn't challenge the call because they didn't have a satisfactory view upstairs.

"How about they just get it right (in the first place)," Joseph said.

The Chargers, a mess of penalties and takeaways that left them begging to lose, responded with a drive as their field goal kicker Michael Badgley remained perfect on the season with a 30-yarder as L.A. regained advantage with 6:51 left.

After failing once, the Broncos responded late. It made no sense. It was hard to believe. It is true that the Broncos did not win because of hope. But for one Sunday, they restored it.