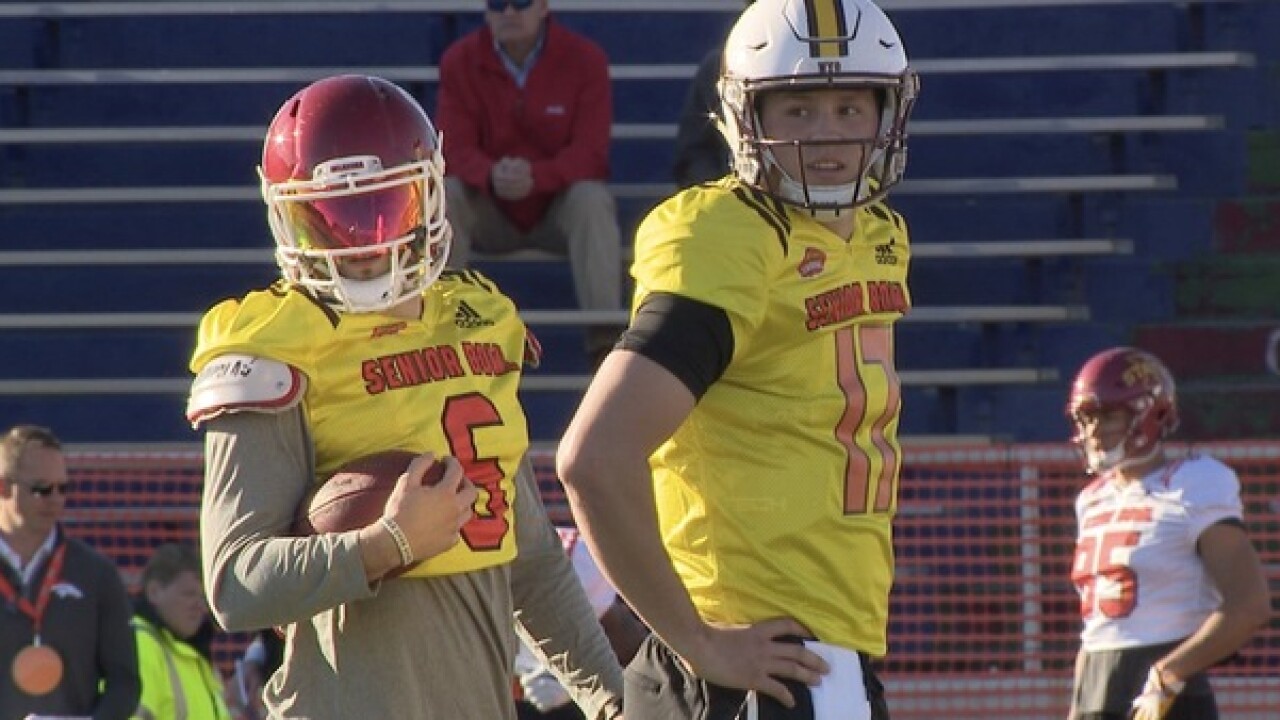 INDIANAPOLIS -- In Lucas Oil Stadium, accessorized by a Peyton Manning statue on the front steps, the Fab Five of college quarterbacks will run through drills at the NFL combine. To all appearances, they will come across as talented and confident.

Josh Rosen, Sam Darnold (who has elected not to throw), Josh Allen, Baker Mayfield and Lamar Jackson share many traits. Which one will distinguish himself this weekend?

Furthermore, would the Broncos be better off drafting one of them rather than Uber a Brinks truck to Kirk Cousins or Case Keenum?

My pros and cons for the prospects as they meet the media Friday beginning at noon MST.

Rosen arrives at the combine with the most to gain. He did not play in the Senior Bowl, leaving questions about his passion for football to unfairly linger. This event represents a chance to look NFL executives in the eye in 15-minute sessions, to tell the press his story. Rosen said Friday he appreciated the opportunity to meet with teams.

"I think I am the best quarterback here. I can diagnose defenses and put the ball where it needs to be," said Rosen, who was once an accomplished tennis player before turning to football. "I love football with all my heart and soul. Playing with your teammates. ... it's the ultimate team sport. I think coaches (here) can really see how much I care. Teammates want a leaders who is a steady rock. You can't change who you are. I understand I have made mistakes but I have learned from it."

Rosen holds a high football IQ. If he comes across as a leader in meetings it could vault him up the board. He is the best pocket passer in this draft in my opinion, and the most pro ready. Durability, however, is a fair concern after he missed games with concussions and shoulder issues.

Had Darnold left school a year ago, he would have likely been the consensus top pick. He shredded Penn State in the Rose Bowl, making ridiculous throws that are rarely seen on Sundays. Then, he pressed last season, trying too hard to make plays that weren't there as his offensive line struggled. His bowl game against Ohio State did not help, and, according to reports, he will not throw here. Some executives might see this as backing down from a challenge. Others will not care, recognizing quarterbacks are more comfortable at their pro days with their receivers rather than random targets not breaking off routes correctly because of the adrenaline of the moment. Darnold can go MacGyver and rescue plays when the wires cross. So if you like him, nothing that happens here should change that opinion.

Mayfield isn't tall. It's an inside joke for Broncos' fans. According to NFL Research, the only quarterback shorter than 6-foot-1 selected in the first round over the past 15 drafts was Texas A&M's Johnny Manziel in 2014. Mayfield is not Manziel. He is the most accurate passer in this draft. He brings a swagger and confidence like few players.

"Absolutely," said Mayfield, when asked if he's the best quarterback in draft.

What about his size?  "I have three years of tape you can watch. I am not cocky. I am confident."

Mayfield took over the huddle and made audibles at the line of scrimmage during Senior Bowl practices, impressing Broncos coaches. His size will not be an issue if used in an offense that incorporates run-pass option concepts like the Eagles and Chiefs. But he likes to extend plays and take hits. No quarterback his size has shown he can do that and stay healthy.

A late bloomer with little Division 1 interest, Allen blossomed into a star at Wyoming. He checks off every box in the QB blueprint. Big arm -- can throw it 82 yards in air he told me -- big body -- can take a hit -- and mobile. The comparisons to Carson Wentz continue, leaving some mock drafts pegging him as the No. 1 overall pick to Cleveland. The Broncos know him, and like him. But there's no denying his accuracy issues on crossing routes. The idea of him playing early his rookie season is overly optimistic. And John Elway admitted this week that "life is too short in the NFL to rebuild." If the Broncos pick Allen it will likely be accompanied by the signing of a veteran like Sam Bradford, Tyrod Taylor or Josh McCown.

Jackson has been one of the best college players the past two seasons, a true dual threat. However, some teams don't see him as a quarterback, even asking him to work out as a receiver. I would politely tell them to stick it. There's no way Jackson should change positions until he exhausts all options at quarterback. As with Allen, he brings accuracy concerns. But his athleticism is eye-popping. Like Rosen, Jackson has plenty to gain over the next few days. Would he make sense for the Broncos at No. 5? No. However, if he's available later on, he would be a fascinating gamble.