John Elway says of addition of Case Keenum: 'We got our guy' 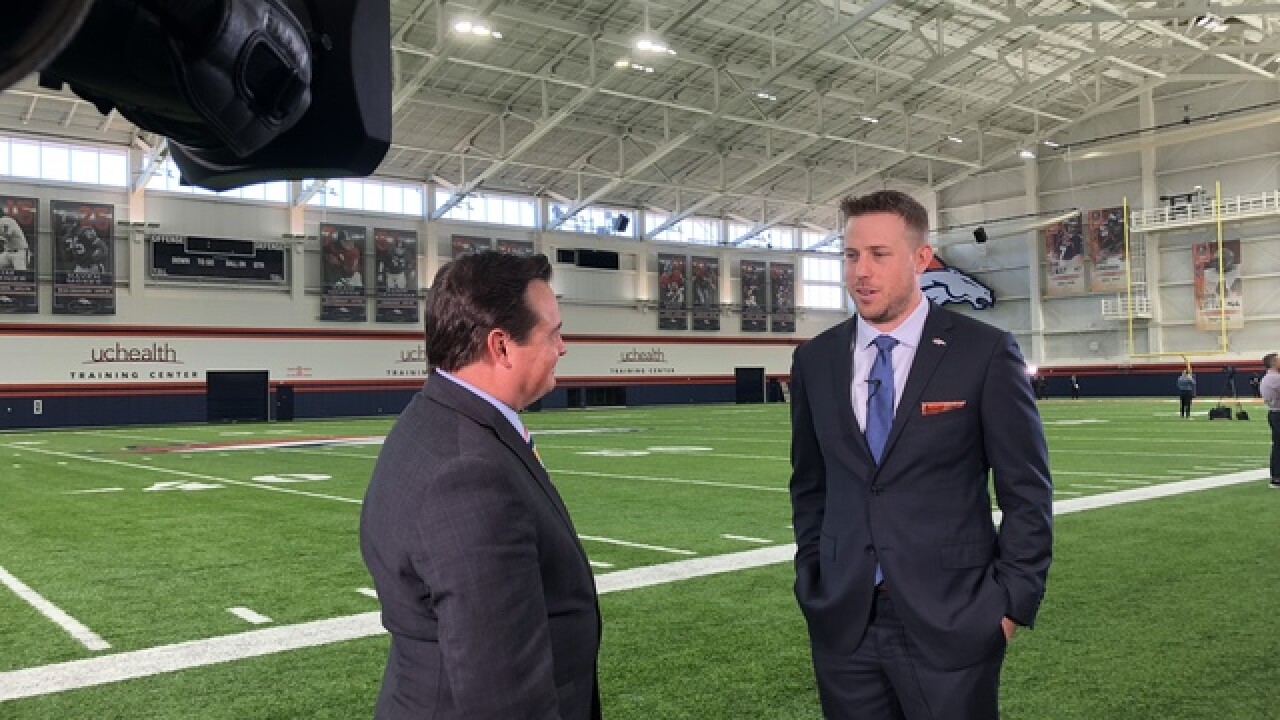 DENVER -- It was a startling transformation, the moment not lost on Case Keenum.

For too long, Keenum was nobody's choice. As an undersized quarterback at Wylie High School in Abilene, Texas, he won a state championship his senior season, finishing his career with 89 touchdowns. He received one college scholarship offer from Houston coach Art Briles.

"They all said if he was a couple of inches taller, it would have been different," said wife Kimberly, who has dated Keenum since high school.

At Houston, he became the NCAA's all-time leader in total passing yards, and fired nine touchdowns in the rain against Rice. His excellence led to zero draft interest. The Houston Texans, coached by Gary Kubiak, signed him to their practice squad.

So here was Keenum on Friday morning in the Pat Bowlen Fieldhouse, a room full of cameras rolling, watching general manager John Elway -- his favorite player growing up -- introducing him by saying emphatically, "We got our guy. He was our target."

For Keenum, who turned 30 last month, it was a bit surreal.

"It's incredible," Keenum said. "It's a dream come true."

A confluence of factors led Keenum to Dove Valley. It starts with his career season in Minnesota, where he produced a 12-4 record, a breathtaking playoff victory and 22 touchdowns and seven interceptions. After weeks of research, Elway, Kubiak and coach Vance Joseph held their free agent meeting and concluded Keenum was the "right fit." Keenum's failures, in many ways, bring hope for future success. He is hardened, mature, "so being quarterback of the Broncos won't be too big for him," Joseph said.

Keenum showed humility with a heavy dose of confidence on Friday. He diets on doubt, so it did not faze him when asked if it bothered him that Broncos players openly recruited Kirk Cousins. As far as he could tell, Cousins wasn't at the podium.

"No, it’s not awkward. Von (Miller) was the first person to reach out. I applaud those guys for wanting to make their team better. I want guys that want their team to be great and that want to do everything they can to help the team. So no, it’s not awkward for me at all," Keenum said. "All those guys have reached out. Like I said my phone is still going off—(Chris) Harris, (Bradley) Roby, Derek Wolfe, all those guys on the opposite side of the ball, who obviously I’m glad we’re wearing the same color jersey now. On the offensive side of the ball, too, the offensive line is reaching out, all those guys, Demaryius (Thomas), Emmanuel (Sanders). Just the reception we’ve had, not just from the city, the fans and the coaching staff, it’s been great. I’m ready to step in that locker room and earn the right to be a leader.”

The Broncos settled on Keenum for a number of reasons. Last season, he demonstrated the NFL's second-best accuracy to Drew Brees, and teammates gravitated to him. The Broncos' offense needs someone to be the frosted side of the Mini Wheat after two years void of personality and identity.

Keenum told Denver7 he believes he is ready for this challenge. He and his wife are searching for homes. He will live here full-time, allowing him to put in endless hours at the facility.

"For me, I have been through a lot. Not just my career as an NFL football quarterback, but in my life. I have taken every experience, it’s made me who I am. I think I am a tough player, a tough person, mentally tough, physically tough. I have got what it takes to play in this league. I have got the attributes personality-wise to be a leader that this team needs to be. And I have the drive," Keenum said. "I am never satisfied with where I am at. I am always trying to get better. I am always trying to be a better person, a better player. I sleep pretty good at night because I do everything I can to the best I can."

Keenum's addition comes with a caveat. The Broncos sank to 5-11 because of multiple issues. Elway told Denver7 he was close to signing a right tackle in free agency, and continues to look at offensive line upgrades. And he would like to add a tight end to an offense that ranked near the bottom of scoring. But Keenum's arrival represents a "great start," Elway explained. It also puts the onus back on the defense. If Keenum plays well, there are no more excuses for the lack of takeaways and change-of-possession points.

"Case is going to help both sides. It's on all of us. Bottom line is last year was a bad year. It starts with me. Everybody has some responsibility, so our job is to get it turned around. The responsibility is going to be on the offense. We want to get better on the offensive side. But by no means are we going to allow the defense to walk either," Elway said. "They had good numbers statistically, but we were 21st in points (allowed). For us to get back to where we want to get back to, everybody has to be responsible for what their job is."

In barely two days in the city, Keenum began to wrap his head around this opportunity. It's one thing to be an NFL starting QB. It's quite another to occupy the job in Denver where your predecessors include Peyton Manning and Elway.

Keenum will not wear No. 7. He will No. 4. But it might as well be No. 1, as the guy no one wanted is now officially The Man in Denver.

"I have been a big fan of Elway for a long time. The picture that somehow surfaced the other day that I tweeted. I think I was John Elway for Halloween for like four years in a row (starting when I was 10 or so). I have been a big fan of his. So for him to introduce me as the starting QB of the Denver Broncos was a dream come true. Four. I wanted to stay single digits. No big reason in particular. A lot of little reasons. Excited to start my own legacy with No. 4."