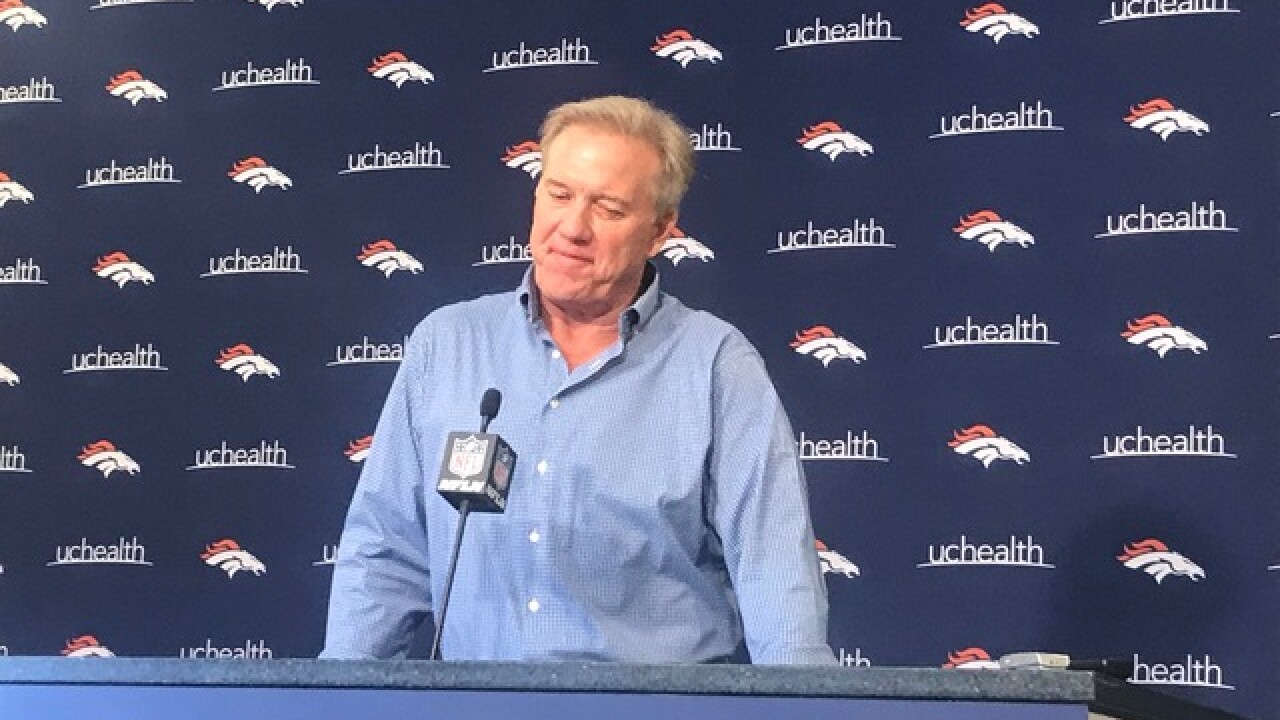 CENTENNIAL, Colo. -- John Elway watched the last few minutes of the Broncos-Colts game from the Lucas Oil Stadium tunnel on Dec. 14. A spirited comeback provided Denver's lone road win. Elway could not muster a smile, already planning for next season.

"We need to get better," Elway said.

The offseason remains his time to shine. Feeling helpless and submarined by poor quarterback play during the year, Elway views this, in many ways, as his two-minute drive. This represents the most critical draft of his tenure. The Broncos own back-to-back playoff absences, and are looking to avoid consecutive losing seasons for the first time since 1972.

Last season's spiral humbled Elway. The roster provided an explanation as only one draft pick -- first-round left tackle Garett Bolles -- made an impact. This April the Broncos own eight choices, including the fifth selection overall.

Will the Broncos eye an impact player first, a quarterback solution longterm or remain open for business to a trade?

"We are going to take the player that is best for the Broncos," Elway said.

Regardless of position? "Yes."

Elway said everything and nothing. The Broncos continue to consider four quarterbacks in the first round -- that's how many he has graded there -- and will pick up the phone if someone wants to deal, more likely shifting back than forward as of now. The top four in the draft are considered to be Wyoming's Josh Allen, USC's Sam Darnold, Oklahoma's Baker Mayfield and UCLA's Josh Rosen. Elway admitted a consensus has not developed on the group, but the plan remains to narrow it down to two players.

Mayfield and Allen continue to receive the most attention locally. Allen is now projected to go first overall to Cleveland in many mocks. It fosters added speculation that Denver could take Mayfield, the reigning Heisman trophy winner, if he's available at No. 5.

"He's fine," Elway said of Mayfield's 6-foot height. "I think what he's done and the numbers he's put up and the success he's had the last three years at Oklahoma, I think he's overcome the size issue."

The quarterback question hangs over the Broncos. Elway told me he has to balance last year's issues when contemplating the pick -- the player who can make a day one impact or one who helps down the road. Elway conceded his view on the quarterback position has evolved, and that when it comes to making the pick, if it goes, that way, "I break the ties. That's my job."

"I’ve learned a lot since doing this job about which quarterbacks have success and which don’t," said Elway, who appreciated Peyton Manning could win a different way with his "cerebral" approach. "One thing is you have to be able to win from the pocket. If you can move around that is an added bonus. You can win games, but you can’t win championships, without the ability to win from the pocket."

Elway remains hopeful last year's draft class will provide a boost to complement this year's picks, mentioning tight end Jake Butt, whose knee has been cleared medically, receiver Carlos Henderson, who had a lost season due to injury, and defensive tackle DeMarcus Walker, who added weight to move back inside.

Denver needs a bonanza this April. Former coach and current advisor Gary Kubiak is an important part of the evaluation process, especially when it comes to the quarterbacks. The scouting staff will gather next week and go through three-round mock drafts to prepare for multiple scenarios. Elway will make calls with teams to see which are prepared to deal on draft day.

The possibility of moving down if the quarterback the Broncos prefer is no longer on the board at No. 5 exists. Could the Broncos shift to the 12th spot with Buffalo, potentially landing inside linebackers like Roquan Smith or Tremaine Edmunds or even Washington defensive tackle Vita Vea. If the team lands multiple picks, with a selection in the 20s, going with UTEP offensive guard Will Hernandez could make sense.

As it stands, the Broncos own the fifth pick. The Broncos have one answer -- "Case (Keenum) is the starter," Elway said, praising his toughness and leadership -- but could address it with another player, too.

"We look to learn from our mistakes," Elway said. "Every situation for young quarterbacks is different. It's different in today's world because of the kind of football team those guys step into."