Column: If two is none? Then when is one, um, one at Broncos QB? 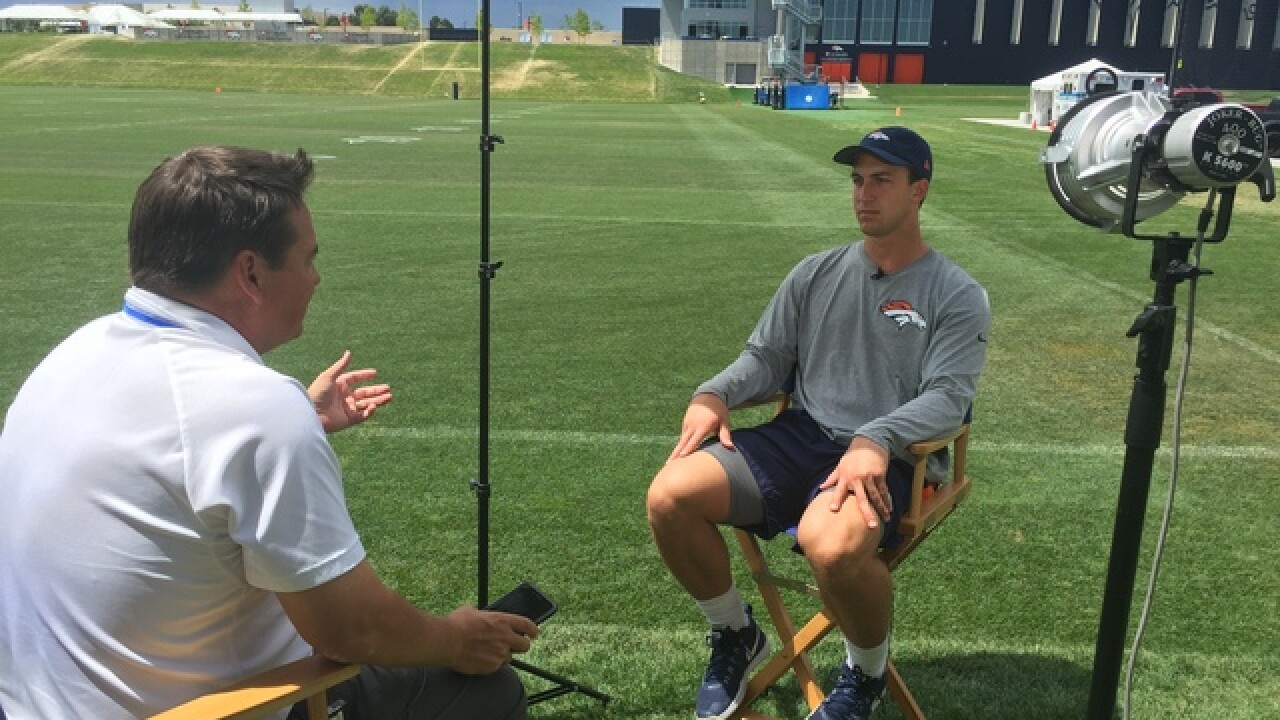 CHICAGO -- Panic remains a stranger. Coach Gary Kubiak meets the press everyday, talking in calm, collected terms about progress and the need for improvement at quarterback.

A popular axiom asserts if you have two quarterbacks you have none. The Broncos have three. Do they have one?

The qualifications feature many variables. The Broncos look for, in no particular order, accuracy, timing on routes, smart decisions, footwork and the ability to get the team in the right play.

Mark Sanchez, a 29-year-old veteran, receives first crack on Thursday. He will start and play one quarter. He should benefit from not facing the Broncos defense. Denver features the best secondary in football, and a front seven which can produce pressure from all angles. Sanchez continues to search for the right balance between taking care of the ball and taking chances. Kubiak wants Sanchez to keep looking downfield on extended plays. He wants his quarterbacks to be more aggressive.

Sanchez understands the concept, but the Broncos defense has flossed its teeth with the quarterbacks on multiple occasions in training camp. Sanchez has thrown three pick sixes to Lorenzo Doss and Bradley Roby (two). The belief remains -- one I prescribe to -- that Sanchez is the slight leader. Many insist he must lose the job to, um, lose the job. I disagree. He needs to make plays. He can't win the spot with a static performance.

Who does he have to be? Alex Smith. You've heard of him. Kansas City Chiefs quarterback. He'd rather eat shards of glass than turn the ball over. His statistics make fantasy league owners weep, but endear him to coaches and teammates. Since landing in Kansas City, Smith has averaged 20 touchdowns the past three seasons. That defines pedestrian. During that same stretch, however, he has thrown 20 interceptions. A 3-to-1 score to pick ratio. The Broncos would take that after they led the league in interceptions last season.

In his best season in 2011, Sanchez was plus-8 (26 touchdowns, 18 INTs). The difference must be in double digits for him to finish as the starter this season.

Trevor Siemian lacks experience. You can't microwave a resume. But the idea he's not a leader is a false narrative. His teammates at Northwestern talk about him in glowing terms. He's been described as "Cool Hand Luke." Unflappable. Determined. Focused.

"He was the guy in the locker room everyone wanted to be around. He was always there for you, willing to help," former Northwestern center Brandon Vitabile told Denver7. "In all of my years of playing sports, I have never been around someone more competitive."

When Broncos quarterbacks coach Greg Knapp worked out Siemian before the 2015 draft he was just four months removed from ACL surgery. Siemian begged his doctor to clear him.

"He was impressive," Knapp said. "And you can see that out here in practice."

Siemian was under recruited, landing at Northwestern as a 190-pound kid after turning down Harvard and Rutgers. He fell in love with Northwestern and its culture on his visit. Pat Fitzgerald, his coach, trusted Siemian first in part-time duty as a third-down threat to complement former Cherry Creek star Kain Colter, who is in Bills camp as a receiver  and later as a starter for 14 games.

"He had a very, very high football IQ from a collegiate perspective," Fitzgerald told Denver7. "He controlled a lot of stuff at the line of the scrimmage. Trevor is just Trevor. He's genuine in every way."

Listen closely to Fitzgerald and it appears he's describing Gary Kubiak as a college player and pro. So it's not a stretch see what appeals to the coach about the seventh rounder. However, the NFL is about as sentimental as a photo radar ticket.

"It's about performance," Siemian said in a one-on-one interview on his his path to winning the job. "That's how you earn respect in a locker room with veterans who have accomplished so much."

Rookie Paxton Lynch draws praise for his athleticism. He's raw, but crazy talented. He can throw on the run. And he can run if unable to throw. The Broncos could start him and run shotgun with quick hitches and outs. They aren't going to do that. It would be a replay of last year's underachieving unit. This team revamped its offensive line, signed C.J. Anderson to a big deal and drafted Devontae Booker to run the ball. The philosophy of the offense is tied to ground control and a gnarly defense.

The auditions begin in earnest on Thursday. The Broncos have enough candidates. They need Sanchez or Siemian to separate enough to force a decision. Broncos Country is waiting.