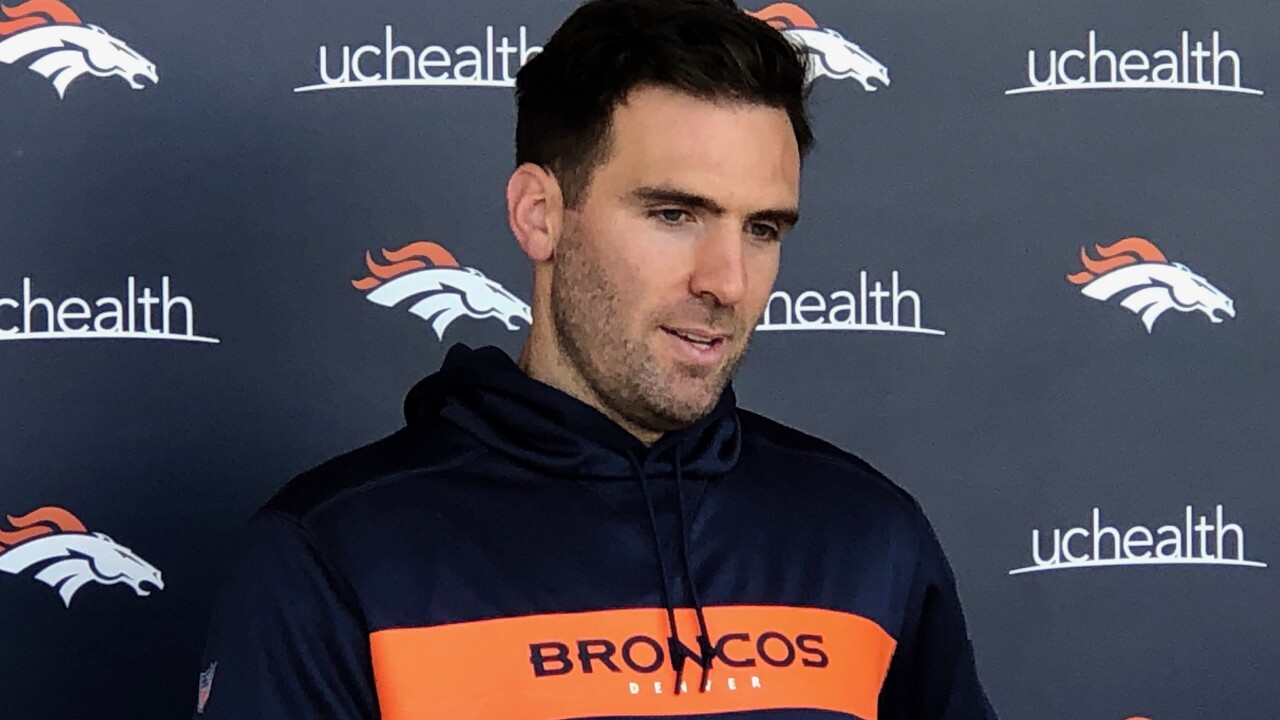 ENGLEWOOD — Certain numbers in society make everything fall in line. Say, 21 in blackjack. Or 3.14 in geometry. For the Broncos, that number is 20. It is hard to see clearly without 20-20 vision on this goal. By now everyone from Sterling to Windsor to Trinidad know the Broncos are winless. But it runs deeper. They have dropped seven straight dating to last season.

The common thread? They have failed to score 20 points in any of these games. You can analyze the gametape, lament bad calls and have Will Hunting make sense of the numbers, but the reality is this: the Broncos' offense is not good enough to win games right now. The Broncos average 15.3 points per week. Only the Dolphins and Jets are worse. This, unfortunately, represents a pattern, not an aberration. Over their last 51 games, which includes a 20-31 record, the Broncos have scored 19.5 points per game. That won't work it if you want to reach the playoffs. Not unless you boast the Broncos' 2015 defense -- that group scored six touchdowns -- or the Bears' beasts of the past two seasons.

"I think it does depend on your defense, but you definitely want to get into the 20s at the minimum," said coach Vic Fangio when I asked about the significance of the number. "You may be a team that needs to get higher. ... I do think (the offense is close). We've moved the ball well a good bit of the time. We just haven't finished drives."

The Broncos red zone touchdown percentage ranks 28th overall at 40 percent (4-for-10) They showed promise against the Packers with three monster scoring drives. However, the lack of quick strikes means fewer possessions and no margin for error. Thus, the Broncos were doomed by three turnovers that were impossible to overcome when Denver's defense has failed to produce a single takeaway.

"When you look at our film it's hard not to be disappointed with our record. But guys are fighting hard. We have to make some things happen. We have to play assignment football a little better to create breaks for ourselves," quarterback Joe Flacco said, who has two touchdowns and two interceptions and has been sacked 11 times, including a career-high six times last week. "We have to get over this hurdle. We are kind of stuck in that point range that we are. It's tough to win football games like that. You are putting a lot of pressure on your whole football team and a lot of pressure on yourself."

The vibe reflects the frustration of the first few weeks, but not a lack of confidence. The effort and attitude remain strong, several players said. But a breakthrough is needed to reinforce the teachings. Words become empty without action. The Broncos recognize that any chance of contending spins off winning this week against Jacksonville.

"We expect so much out of each other, just like you guys do and our coaches do. We expect to put up more than 20 points. We see that on film with the plays we leave out there. But that's the game of football," promising rookie guard Dalton Risner said. "We are not 0-3, we are not losers. We know we are a good football team and where we are going to get. We need to work out the kinks and eliminate the self-inflicted wounds. But a team that can be very successful and the mojo around this locker room is just fine."

Callahan out 4-6 weeks
The lost season for cornerback Bryce Callahan continues because of a lingering foot issue. He will be out 4-to-6 weeks after undergoing a procedure on his foot. He broke the metatarsal last December, and reaggravated it on July 27. He practiced sparingly since, and has not played a down this season. Fangio said it is not a Lisfranc injury. Considered an important free agent addition from Chicago to make the pieces fit in the secondary, his absence has created issues.

"It’s definitely had an impact. Kareem (Jackson), we had envisioned playing safety and that’s where he got most of his preparation in the offseason and in training camp. He’s playing nickel now. Chris (Harris Jr.), we had envisioned as playing nickel and he’s playing corner now. In Kareem’s case he didn’t have a lot of nickel practice during the offseason and preseason," Fangio said. "He’s still learning on the job. He knows what to do. He’s experienced, but there’s been a play or two that he hadn’t played correctly, and it’s no fault of his own. He just hadn’t been on the job enough for us.”

Lindsay defiant
Broncos running back Phillip Lindsay is not happy with the 0-3 start. He's also not crazy about the criticism surrounding it. He believes the team will turn it around, and don't expect him to install airbags for any returning fickle fans.

"Only you guys are sitting here not believing us. If you are true fan, then you believe in us. If you are a bandwagoner, then you are going to believe what you want to believe," Lindsay said. "If you haven't played this game, then you just don't know. But we have a lot of games left, we can be in the playoffs and make a big run. If we do, I don't want everyone jumping on the bandwagon saying I told you so."

Footnotes
Defensive end Derek Wolfe (right ankle) told Denver7 he hasn't given up on playing this Sunday. An MRI revealed no fracture. "You know me. I want to be out there," Wolfe said. ... Linebacker Josey Jewell (hamstring) and Jackson (hamstring) are nursing leg issues. ... Fullback Andy Janovich (pectoral) is trending toward playing this week. ... Right tackle Ja'Wuan James (left knee) was at practice for the first time since injuring his leg on the 10th snap against Oakland in the season opener. He is progressing toward playing in the next few weeks.