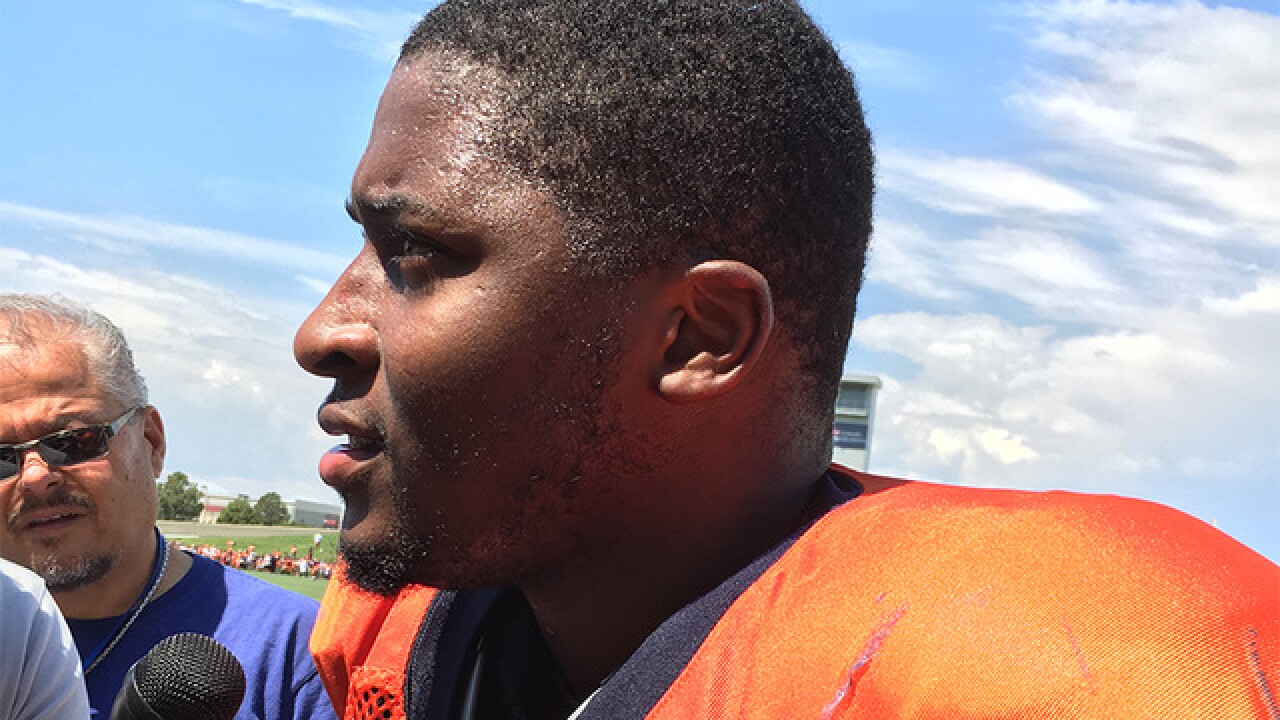 CENTENNIAL, Colo. -- Mark it down. On Sunday, the Broncos' practice transitioned from OTAs to UFC. On the Broncos fourth day of training camp, they wore pads, threw punches, delivered big hits and watched their quarterbacks feast on reserve defensive backs.

"It's finally football," linebacker Todd Davis said of putting on full equipment. The physical nature of practice became obvious as running back C.J. Anderson broke free. It led to a confrontation between reserve inside linebacker Corey Nelson and center James Ferentz. Fists flew before the combatants retreated to their respective corners. Later in practice, Nelson and Ferentz tangled again as safety Shiloh Keo joined a pack of players scuffling. Coach Gary Kubiak stopped practice, reminding the players to keep their focus and finish strong. The intensity, of course, is welcomed within reason.

"That's how we show we love each other. Families fight," left tackle Russell Okung said.

Added Nelson, "These are the practices you live for. It shows that we are passionate about our job. But there is a fine line."

Linebacker Zaire Anderson, a practice squad player from Nebraska who made it to the final cut last summer, set the tone with a hit on running back Ronnie Hillman that should have required the exchange of insurance papers. Hillman came through the hole with his pad level high and Anderson buried him, delighting the 4,741 fans, the largest crowd this camp. Hillman left soon after with a sore back.

--Rookie quarterback Paxton Lynch enjoyed his best day, completing three touchdowns before throwing an interception. Receiver Kalif Raymond caught one. He continues to impress, though his path to the roster must include punt return work, where he had an uneven day catching the ball. Kubiak praised Raymond on the practice field for taking advantage of his opportunities in the passing game.

--Outside linebacker Von Miller didn't need a veteran day. He had a veteran offseason. Not that it mattered. He continues to operate as a wrecking ball. He mauled linemen in abbreviated drill work even when double-teamed. He's expected to participate in a full practice in three days.

--Bennie Fowler is making a case for the third receiver spot. Cody Latimer is valuable on special teams, but Fowler continues to make plays in the passing game. Coach Gary Kubiak believes this is the most talented receiving corps he's ever had in a training camp.

--The offensive line isn't looking for improvement. It's looking to be good without any qualifiers. Left tackle Russell Okung remains the key. He has been better than expected early in camp as he returns from a right shoulder injury. He's become a leader in the group. Ty Sambrailo is working at first team right guard, but must win the spot. He continues to experience up-and-down days and "nicked up" his elbow during Sunday's practice, according to Kubiak. Sam Brenner, his backup, left Sunday's practice with a concussion. A guy to keep an eye on is rookie Connor McGovern. He looks more comfortable than he did during OTAs.

--Reciever Marlon Brown left practice with an undisclosed ailment. Cornerback Aqib Talib continues to make progress but has yet to practice.