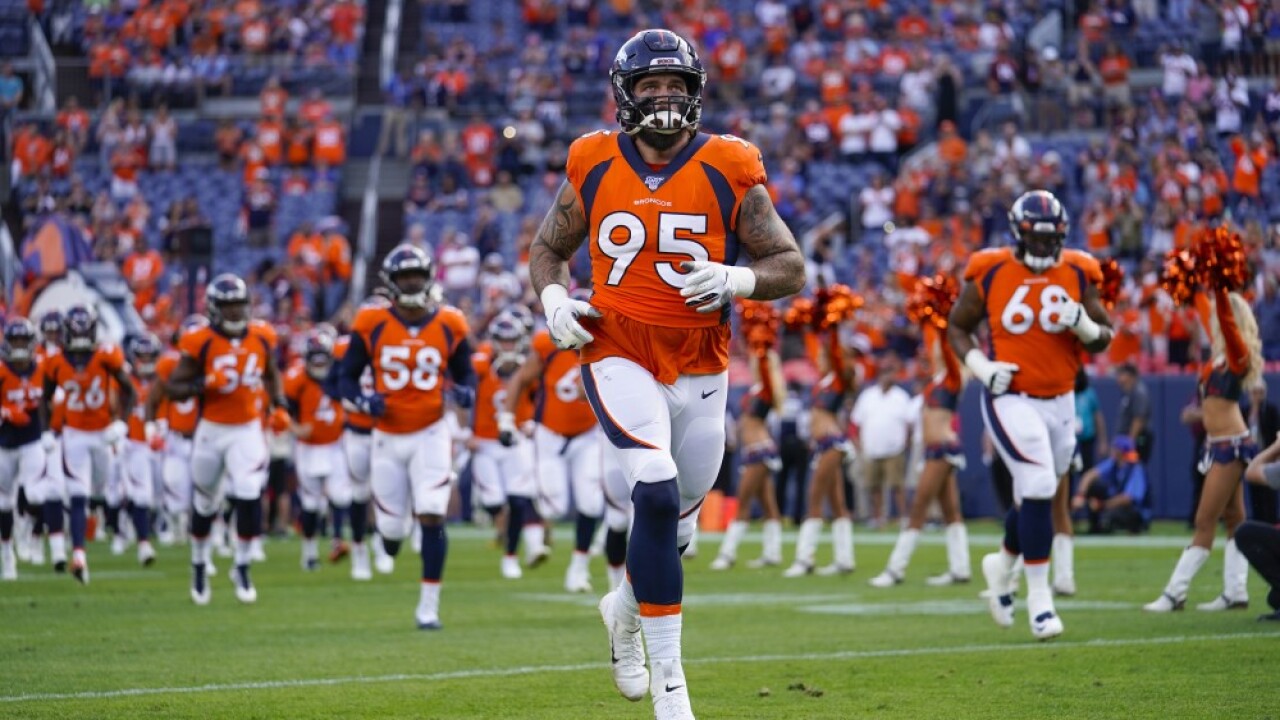 DENVER -- Derek Wolfe boasts a career defined by toughness. He has pushed through a battery of injuries, continuing to silence critics with strong performances.

Wolfe's style of play -- accompanied with a howl for big moments -- made him a fan favorite in Denver. Ideally, he wanted to retire with the Broncos, the only team he has ever known. The Broncos never made an offer, and he found a nice landing spot.

Saturday, Wolfe told Denver7 he has agreed to a one-year, $6 million deal with the Baltimore Ravens with $3 million guaranteed, ending an eight-season run in Denver.

"It's a chance to compete for a Super Bowl. They have a great defense," said Wolfe. "I spent eight years here. Denver is always going to be home. This is where I am going to raise my family. My wife loved living here. I will always be a part of the Broncos one way or the other. I have no hard feelings. I get it. It's a business. The Broncos have to do what's best for the Broncos."

Free agency became an anxious process for Wolfe. While one of the top 100 players available, he waited patiently for the right fit. The Broncos made it clear by their actions that Wolfe, drafted in the second round in 2012, was not a priority. Denver acquired five-time Pro Bowler Jurrell Casey and brought Shelby Harris back into the fold on a one-year, $2.5 million deal on Friday.

Wolfe never gave up hope of staying, admitting winning Super Bowl 50, and the subsequent parade "in front of a million Denver fans" will forever be etched in his memory. But he began bracing to leave for weeks. In Baltimore, he joins one of the AFC's best teams with reigning MVP Lamar Jackson.

"It is a make-good deal, but I feel like I have plenty of good football left. I am coming off one of my best seasons. I was on pace for 10-plus sacks. That's my goal to get that every year," Wolfe said. "It's going to be weird (not seeing Von Miller and other teammates). And it will be weird being in a different locker room. But, I am super stoked."

The 30-year-old posted seven sacks in 12 games before suffering a season-ending elbow injury. Dating to training camp, Wolfe explained that Vic Fangio's defense was a perfect fit. He proved prophetic, not only in producing sacks but quarterback hits. Wolfe has been a strong contributor for years, helping anchor the defensive line that mauled the Carolina Panthers in Super Bowl 50.

Wolfe grew up before our eyes. He has gone from a wild, menacing player to a man with controlled aggression who relishes being a husband and a father. He owns 299 career tackles and 33 sacks.

His numbers become more impressive when considering his recent injury history. He suffered severe neck pain in 2017, causing his right arm to go numb. A redesigned workout program and surgery on a pinched nerve in his neck revived his career. He played 16 games the following year and missed only four last season after a flukish elbow injury. Fans gravitated to Wolfe because of his production, candor, and openness in good times and bad.

"It's funny thinking about —all the changes I have made. I came here as a 22-year-old kid. Now I am married with kids," Wolfe said. "It's been a full transformation. Now, it's time for a fresh start."