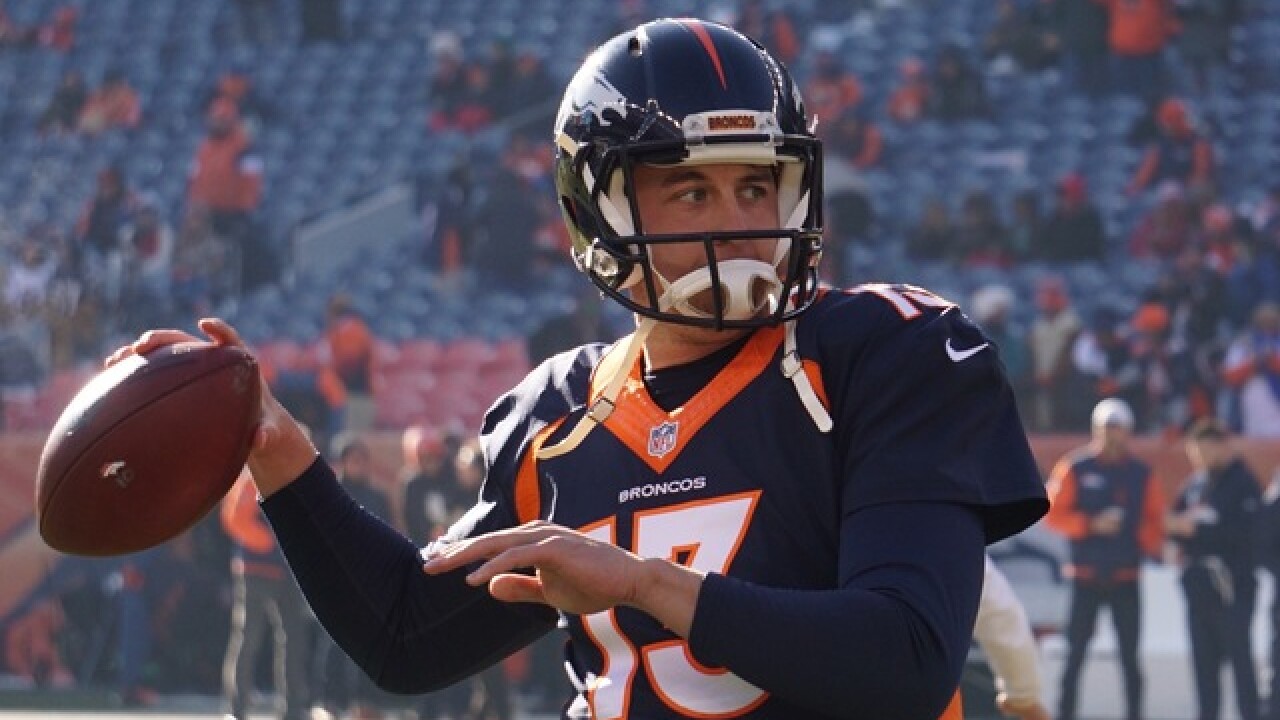 DENVER -- Trevor Siemian shed the sling on his surgically-repaired, non-throwing left shoulder, and remains optimistic he will be ready when OTAs begin in April.

In an exclusive interview Friday, Siemian told Denver7 a follow-up exam next month will help determine a timeline for his recovery.

"I am out of the sling and everything is going really well so far," Siemian said. "I should be good for OTAs but we'll see. I'll touch base with the Doc at the end of March and see how I am doing."

Siemian, in his first year as a starter, played 14 games, throwing for 3,401 yards, 18 touchdowns and 10 interceptions last season. He posted an 8-6 record. Siemian separated his left shoulder on Oct. 2 at Tampa Bay when defensive tackle Clinton McDonald slammed him to the ground on a second-quarter sack. Siemian missed the next game at home against Atlanta -- the Broncos' first loss -- and returned for a Thursday night contest at San Diego.

Siemian appeared compromised during the Chargers game, but improved as the season progressed. He admitted he played in discomfort until the final three games of the season, insisting it was no excuse as the Broncos faded and missed the playoffs.

Siemian, 24, chose elective surgery on Jan. 3 to help him work out more and build strength. He wore a sling until earlier this month, and it came off on schedule. Even if Siemian misses time during April OTAs, those are non-contact workouts.

The team continues practicing through mid-June, leaving plenty of opportunities for him to compete with former first-round pick Paxton Lynch for the starting job before training camp. Any delay or extra caution in Siemian's recovery would provide additional reps for Lynch. The Broncos continue to express confidence in their two young quarterbacks in offensive coordinator Mike McCoy's system, but until clarity exists in Tony Romo's situation he will be connected to the Broncos.

According to multiple reports, Romo hopes the Cowboys release him to allow him to pursue a starting job as a free agent. Houston, Kansas City, Chicago and Denver have been the teams most mentioned as possible destinations.

Siemian conceded last season drove home the point he must learn to protect himself better. He dealt with a right shoulder issue in training camp, and left shoulder and left foot injuries during the season. As his left shoulder heals, Siemian has become anxious to get back to work.

"I can't wait to pick up the new scheme. And I can't wait for football to come back around," Siemian said.