EXCLUSIVE: Broncos' Vance Joseph says there 'will be race' for offensive linemen in free agency 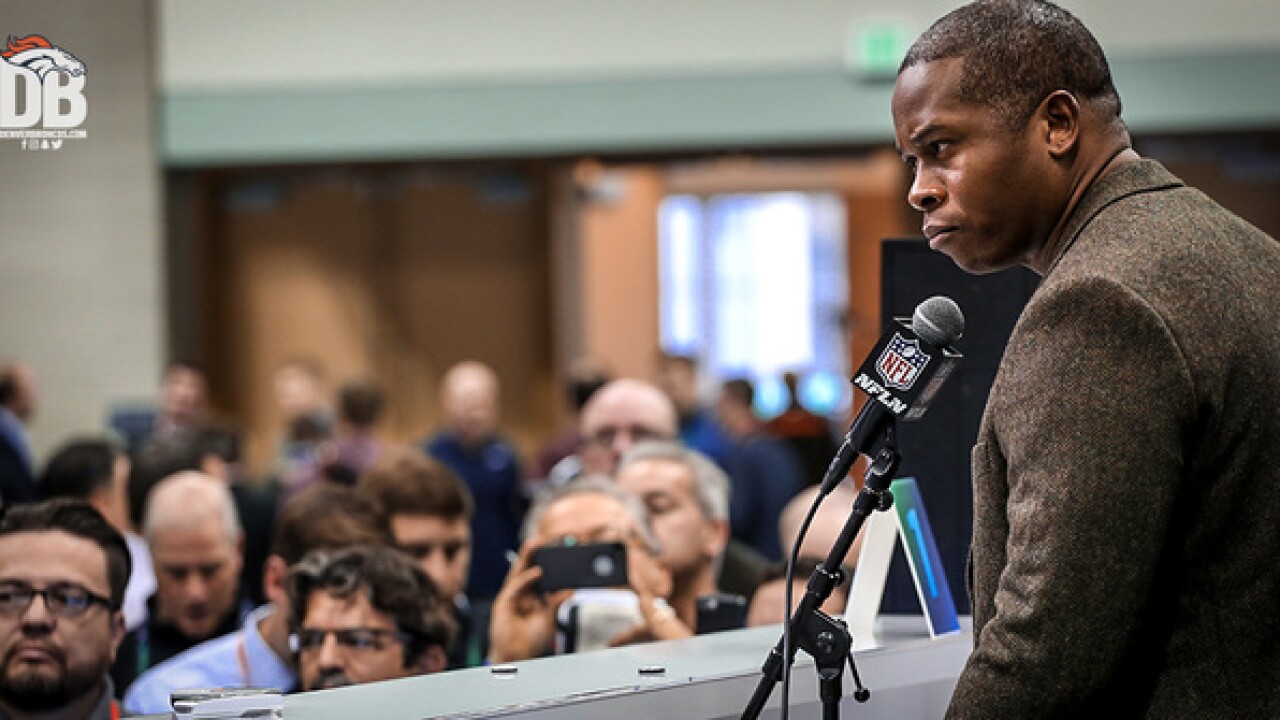 DENVER -- The conflict emerges from the hyper competitiveness.

Broncos general manager John Elway wants to win from now on. But winning now remains so damn appealing. Vance Joseph took over as coach, charged with returning the team to glory. It makes the opening of free agency Tuesday fascinating. Teams can begin discussing contract numbers with agents of players due to become restricted free agents. No player can officially sign until Thursday at 2 p.m. Pressing pause on the quarterback situation for a moment, the Broncos are seeking upgrades upfront.

In an exclusive interview with Denver7, Joseph discussed a tentative road map.

"We need O-line help and D-line help, also. Offensive line being a priority in my opinion because that's the hardest spot to acquire," Joseph said. "Defense linemen --  we are going to have a chance to acquire some players early and maybe later in the process. Offensive line is a position everyone one wants and that's going to be a race for get the right guys in free agency."

The Broncos, according to NFL sources, are prepared to be aggressive in adding a right guard, while exercising more patience at tackle. The Broncos are prepared to give Max Garcia another chance to retain his spot at left guard. The right guard market boasts intriguing options. Cincinnati's Kevin Zeitler ranks as the top player, but could command $10 to $12 million annually  -- that's tackle money -- given the anticipated suitors. If the Broncos determine the price is too steep given the desire to address multiple needs, they will eye Dallas' Ronald Leary, Green Bay's T.J. Lang and Detroit's Larry Warford. Leary dealt with a back issue last season that forced him to miss time. If deemed healthy, he could be the No. 1 target. Lang's name has been connected to the Broncos for weeks.

At tackle, Andrew Whitworth is the best available. He continues playing at a high level, but is 35. Those ranked behind Whitworth include Kelvin Beachum and Russell Okung. The Broncos have not ruled out bringing Okung back, but he is attracting interest from the Panthers and Giants according to multiple reports. At 27, Beachum provides potentially a higher upside and longer shelf life.

Joseph praised his quarterbacks, but left open the possibility for change.

"I would say this: we have got two young guys who won a combined nine games last year. But any player who becomes available in free agency we are going to look at," Joseph said.

The addition of Romo would illustrate the Broncos' growing belief they aren't far away from prominence. They missed the playoffs by one game, and no AFC West team won a postseason game last season.

"Well the defense is still going to be a top 10 defense," explained Joseph. "The same players are in the building. Everybody is excited about this upcoming season. Obviously, last year was a disappointment. To win nine games and it felt like we only won three, that's a good sign. Everyone is motivated. Watching the offense (on film), it wasn't as bad as everyone thinks it was. A couple of tweaks here and there and we can get back to where we belong."