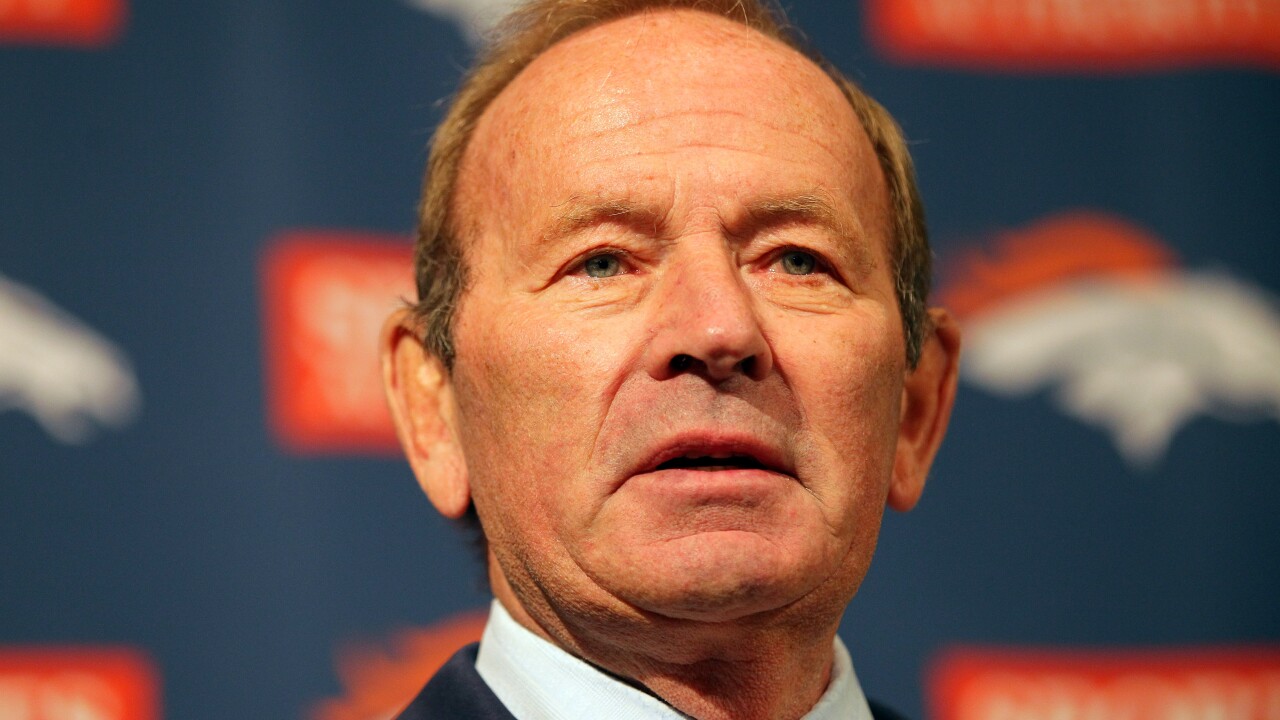 Doug Pensinger/Getty Images
ENGLEWOOD, CO - MARCH 20: Majority owner, president, and CEO Pat Bowlen speaks during a news conference announcing quarterback Peyton Manning&#39;s contract with the Denver Broncos in the team meeting room at the Paul D. Bowlen Memorial Broncos Centre on March 20, 2012 in Englewood, Colorado. Manning, entering his 15th NFL season, was released by the Indianapolis Colts on March 7, 2012, where he had played his whole career. It has been reported that Manning will sign a five-year, $96 million offer. (Photo by Doug Pensinger/Getty Images)

DENVER – Pat Bowlen’s eldest daughters on Friday filed a motion in Arapahoe County Court asking the court to invalidate the Patrick D. Bowlen Trust by claiming the late Broncos owner did not have the mental capacity to sign the documents planning out the trust.

Giovanni Ruscitti, who is the co-counsel for Amie Klemmer and Beth Bowlen Wallace, confirmed that the petition had been filed Friday but could not provide it to Denver7 because the case is suppressed. The petition was first reported by our news partners at The Denver Post.

“There is substantial and overwhelming evidence that Mr. Bowlen lacked the required capacity in 2009,” Ruscitt said. “As a result, Ms. Klemmer and Ms. Wallace have filed a petition asking the court to decide. That issue, the related issue of whether the 2009 trust, which is the document under which the trustees have derived their power and authority, is valid and whether Mr. Bowlen was subjected to undue influence.”

Dan Reilly, the attorney for the trustees, issued a statement saying he was disappointed in the latest filing.

"It is sad an unfortunate that Beth Bowlen Wallace and Amie Bowlen Klemmer have elected to contest their father's plan and attack his personal health. This complaint represents the latest effort in their public campaign to circumvent Pat Bowlen's wishes," Reilly said. "The evidence in the courtroom will show Pat Bowlen was fully capable of establishing and understand his trust and estate plan when it was created in 2009. Mses. Wallace and Klemmer's current position about their father's supposed mental incapacity in 2009 was not raised by them or their lawyers until after 2014, when Ms. Wallace was privately told by the trustees that she was not capable or qualified to serve as controlling owner."

"The trustees will continue to follow Pat Bowlen's plan to oversee and protect the team, the entire Bowlen family, and Broncos fans everywhere," Reilly added.

Late last month, a judge dismissed Bill Bowlen’s lawsuit in which he sought to remove the trust that has overseen the team since Bowlen stepped down in 2014. Bill Bowlen is Pat’s brother and filed a lawsuit last year seeking to remove the trust after Beth Bowlen Wallace expressed her desire to own the team in early 2018 but was told by the trust she was not qualified.

Broncos CEO Joe Ellis and the other trustees, Rick Slivka and Mary Kelly, have said for months they expect Brittany Bowlen to rejoin the franchise in a senior management position later this year. She has expressed desires to become controlling owner of the team.

The NFL is arbitrating the fight over the team’s ownership at the trust’s request but Klemmer and Wallace’s attorneys do not believe that is proper, co-counsel Scott Robinson told The Post.