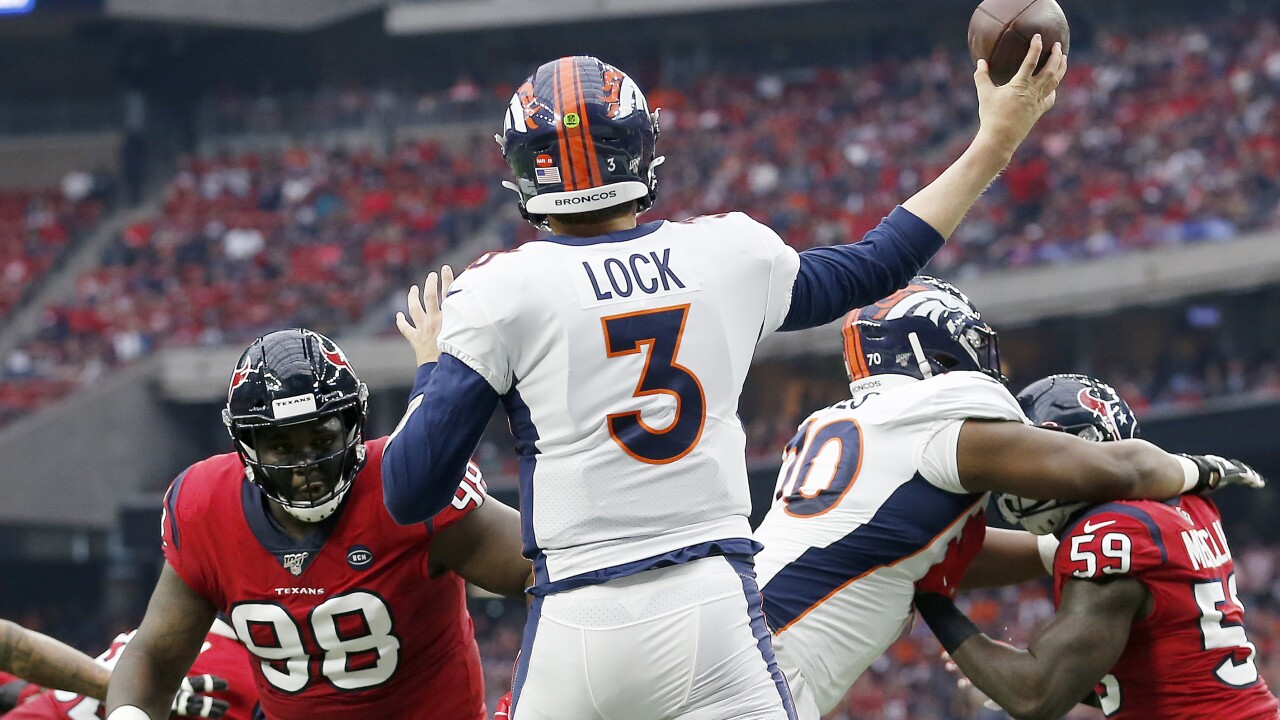 KANSAS CITY, MO. — So I board a Southwest flight to Kansas City on Saturday morning. The flight bulges at capacity with many going to the Broncos game. This seemed unthinkable after the Buffalo loss, when apathy infected the region after Denver committed the unpardonable sin in sports: being bad and boring.

Then the buzz returned. As in Buzz Lightyear. The kid quarterback Drew Lock made Denver fun again. He’s like a puppy, and nobody wants to – or should – take the wag out of his tail. As a fan walked by on the plane, he admitted, “This is my fourth straight year going to this game, but I really like our chances this time.” Lock has provided hope.

Still, it would represent a stunning upset given Denver’s issues against Kansas City lately – eight straight losses -- and this month specifically. The Broncos are 3-17 at Arrowhead Stadium in December. Only John Elway, Kyle Orton and Peyton Manning – in that order – have won in here during this time of year.

Lock remains confident he can join the list. And he headlines my Denver7 keys to victory:

Locked in
Playing quarterback for the Broncos is not too big for Lock. He relishes this role. And Sunday, the spotlight increases in wattage. Lock returns home where he starred at Lee’s Summit High School. He will have roughly 50 friends and family wearing No. 3 jerseys in the crowd. Lock must avoid the temptation to do too much. The Chiefs will surely learn from the flawed man coverage approach used by the Chargers and Texans and rely on zone matchups and blitzes. Lock can throw off script, and will not play favorites. Eight of his first nine passes last week went to different receivers.

Holding Court
Variety is nice. It brings a team together. However, the Chiefs’ zone means Lock must lean harder on Courtland Sutton. He has been the Broncos’ best player this season. If Sutton leaves this game without seven targets, the Broncos will exit with a loss. The risk is real. Kansas City boasts 13 picks, tied for third overall.

Line it up
The Chiefs embarrassed the Broncos last time, notching eight sacks of Joe Flacco and one on Colby Wadman on a ridiculous fake punt. Denver never adjusted to blitzes from the outside, up the middle or delayed. This is a proud group that is playing better under line boss Mike Munchak. The Broncos cannot allow more than three sacks.

Run the rock
The most disappointing thing about the loss earlier this season – and there was plenty to choose from with the fake punt, failed two-point conversion, nine sacks, failing to score after Patrick Mahomes departed with a dislocated kneecap – was Denver’s inability to run the ball. The Chiefs struggle to stop ground attacks. And after the first possession, Denver’s became a whimper. Phillip Lindsay remains on track for 1,000 yards. But with snow in the forecast, he needs his best game of the season. He must finish with roughly 120 yards on 18 carries to control the clock and keep Kansas City’s offense off the field.

Throwing hands
Patrick Mahomes is having a terrific year, but has been compromised by ankle, knee, and hand injuries. He isn’t running much, but will drift on dropbacks, forever trusting his arm. The Broncos’ defensive linemen – and it’s a thin group with Derek Wolfe, DeMarcus and Adam Gotsis out with injuries – must get their hands in the air and create tougher throwing lanes. One pick by Chris Harris Jr., Justin Simmons or Kareem Jackson could be enough to triumph in a bare-knuckle battle.

Von on fire
Forget spicy, it’s time for Von to go full ghost pepper. Against the Chiefs last time, he was just a ghost, failing to register on the stat sheet. He has a half sack in his last six games against the Chiefs. He’s playing through pain with a sprained MCL in his left knee – he loves the game, and this team – but needs to find a way to produce a strip sack or a wow moment.

Kick in the rear
The Chiefs are better on special teams than the Broncos, most notably in punt and kickoff coverage. Denver has a better leg. The Chiefs have been sloppy in the kicking game. In a snowstorm, could this be Brandon McManus’ walkoff highlight of the season?