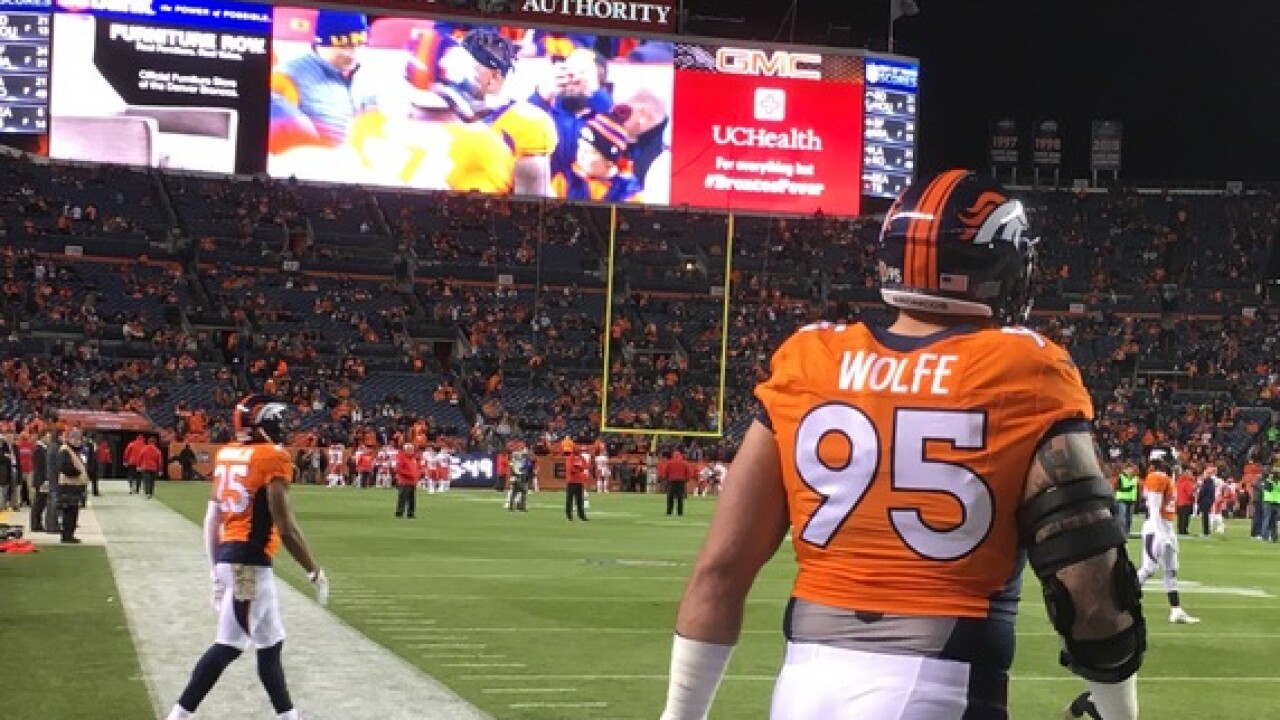 DENVER -- The move grabs attention before the words.

In an exclusive interview with Denver7, Broncos defensive end Derek Wolfe stared at the iPhone camera, and moved his neck from side-to-side and up and down. He smiled while performing the simple act that spoke volumes about his health.

"I feel great, dude," Wolfe, 28, said. "I am lifting weights, heavy. I am doing 500-pound dead lifts, doing big squats. I had 225 pounds on my back doing straight leg squats the other day. I am good. I am using 150 pound dumbbells for bench press, I am good. Whatever they want (in offseason workouts). They want me to put a helmet on? I will go. I am ready."

Declarations in April provide pause -- the team's strength sessions begin April 16 --  but this moment can be interpreted as only positive news for the Broncos.

When Wolfe entered the cramped visiting locker room in Oakland on Nov. 26, his future hung in the balance. He never returned to an NFL field last year, his season lost to ankle, finger and neck injuries. Wolfe admitted to suffering from spinal stenosis in the C7 segment of his neck. Per spine-health.com, this signals a nerve root has become compressed, causing pain on the arm. Wolfe suffered numbness.

Wolfe predicted a full recovery, but surgery was ultimately required. That made this interview more illuminating. Wolfe acted pain free for the first time I have interviewed him since the Super Bowl 50 season. There were no qualifiers, no reservations, simply a veteran ready for a reboot.

Wolfe finished with 31 tackles and two sacks last year. He averaged 5.5 sacks and 50 tackles the previous two seasons. A return to that production could help lift a defense that broke under the strain of an underwhelming offense and ill-timed mistakes. Change of possession points and playing without a lead left the Broncos compromised. Denver ranked 22nd in points allowed per game (23.9) and sacks (33).

General manager John Elway targeted specific needs this offseason, adding a starting quarterback in Case Keenum, an inside pass rusher in Clinton McDonald, a right tackle in Jared Veldheer, a nickelback in Tramaine Brock, and a hybrid safety (Su'a Cravens). Elway has challenged his top players to improve, and Wolfe understands, saying it is the boss' way of "motivating us."

Wolfe remains prepared to rebound. But what about a team that is attempting to avoid its first back-to-back losing seasons since 1972?

"I think the moves we made are great. Getting the quarterback spot settled was big. Nothing against Trevor (Siemian), but we needed something there," said Wolfe, who admitted last year was humbling, while noting it's time to "get our confidence and edge back" this season. "The offensive lines -- we made some moves. We made some moves on defense. It's going to be interesting to see what happens. I am ready."

Beyond adjusting to new teammates, Wolfe must adapt to rule changes. The NFL's new targeting rule created a stir among players, who could now be subject to ejection for leading with their helmet. It is intended to make the game safer, but players wonder how it will be enforced.

"I don’t know what’s going to happen. It’s going to be interesting. We will see in the preseason how they evaluate it. What does leading with your head look like for offensive linemen and defensive linemen? I am concerned about that," Wolfe said. "Every single play we are crashing heads. If you take that out, you are going to see guys needing prosthetic arms and elbows because our arms and elbows will be destroyed. This is a physical game. Get over it. Toughen up, right?"