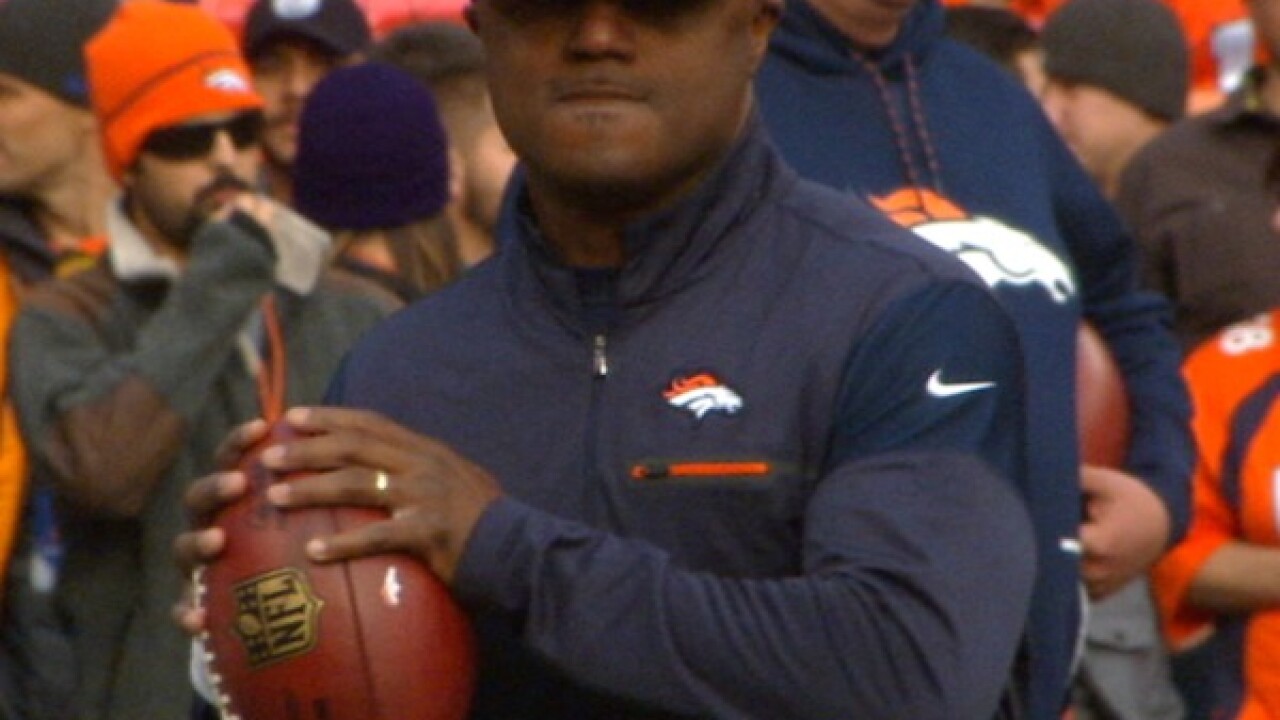 In existence since 1993, the Rockies play for their first National League West title in Los Angeles. In Denver, the Broncos face the Kansas City Chiefs as a home underdog for the second time since 1991.

The Rockies enjoy better odds, trotting out starter German Marquez against the fang-bearing Dodgers. Marquez owns a 1.20 ERA at Dodger Stadium this season. He turns hitters' knees to Jell-O with a wicked slider and a 95-mph fuzzy fastball.

The Broncos possess outside linebacker Von Miller, one of the league's best players. However, baseball is a series of solo performances in a concert. Football is a collaboration, requiring teamwork and execution to win. Von must be great tonight to upset the Chiefs, but he needs plenty of help.

My Denver7 Keys to a Broncos' victory:

Remember how the Broncos topped Seattle? Miller outplayed quarterback Russell Wilson, collecting three sacks. A similar total is unrealistic Monday. But the Broncos need to hit Patrick Mahomes, make him uncomfortable. He has faced almost zero pressure, finding easy completions with routes that have produced more open receivers than any team in the NFL. Think of the Broncos' big wins in recent seasons, and it almost always involved Von harassing the quarterback.

In a league that has produced 12, 400-yard passing games this season, Keenum remains a pedestrian acquisition. He has been terrific in the fourth quarter, completing 24 of 33 passes and engineering comeback wins over the Seahawks and Raiders. The number falls to 14 for 25 in the first quarter, part of a 56 percent completion percentage percentage in the first three quarters. He knows he has to be better, along the lines of two or three touchdowns and no interceptions.

The CliffsNotes summary of the Chiefs: They are the Broncos under Peyton Manning. Mahomes has 13 touchdowns in three games, the most ever, breaking Manning's record. How did opponent's slow Manning? Gorge the clock. The best defense is keeping Kansas City off the field. Denver's goal has to be to win 30-27, not 41-38. Kansas City allows 5.22 yards per carry. The Broncos require a heavy dose of Phillip Lindsay and Royce Freeman to pull off the victory, setting up play action for Keenum.

This cannot be forgotten. When the Broncos take care of the ball they take care of business. They have won 32 straight games when wining the turnover battle. A short field for Kansas City spells doom for Denver.

This is gleaned from Nolan Richardson's old Arkansas hoops teams, who created 40 Minutes of Hell for opponents with a fullcourt press. The Broncos must play a strong amount of press coverage, trusting the outcome to Chris Harris Jr. and Bradley Roby. Will it lead to big plays at times? Yes. However, allowing Mahomes to gain rhythm with easy completions like Joe Flacco and Derek Carr guarantees a loss. The key is protecting the third and fourth corners, Adam Jones and Isaac Yiadom, especially against tight end Travis Kelce, who has torched the Broncos. The best way to help the pair is by creating pressure on Mahomes up the middle with stunts and twists from the defensive linemen. That allows Von to create havoc and rushed throws.

The Chiefs have scored 49 first quarter points, easily tops in the league. The Broncos sit at 21. Denver cannot afford to play catchup against Kansas City. Deliver the first punch to the windpipe. It serves two purposes: creates an early lead, and incites a crowd wanting a reason to go bonkers on Monday night. The fans can make a difference. Let them.

When the Broncos faced good teams last season, they were thoroughly outcoached. Boss Vance Joseph and defensive coordinator Joe Woods know they are sitting on a Bunsen burner. Nobody doubts their football IQ, but the ability to make adjustments in real time remains critical. If Joseph doesn't like what he's seeing from the defense, be assertive in the first drive, first quarter, whatever. Waiting until halftime could be too late. The Chiefs Andy Reid is a master playcaller, creating mismatches through motion and blending a wicked version of a college run-pass-option concepts. Beating Reid requires playing chess from the first pawn placement.