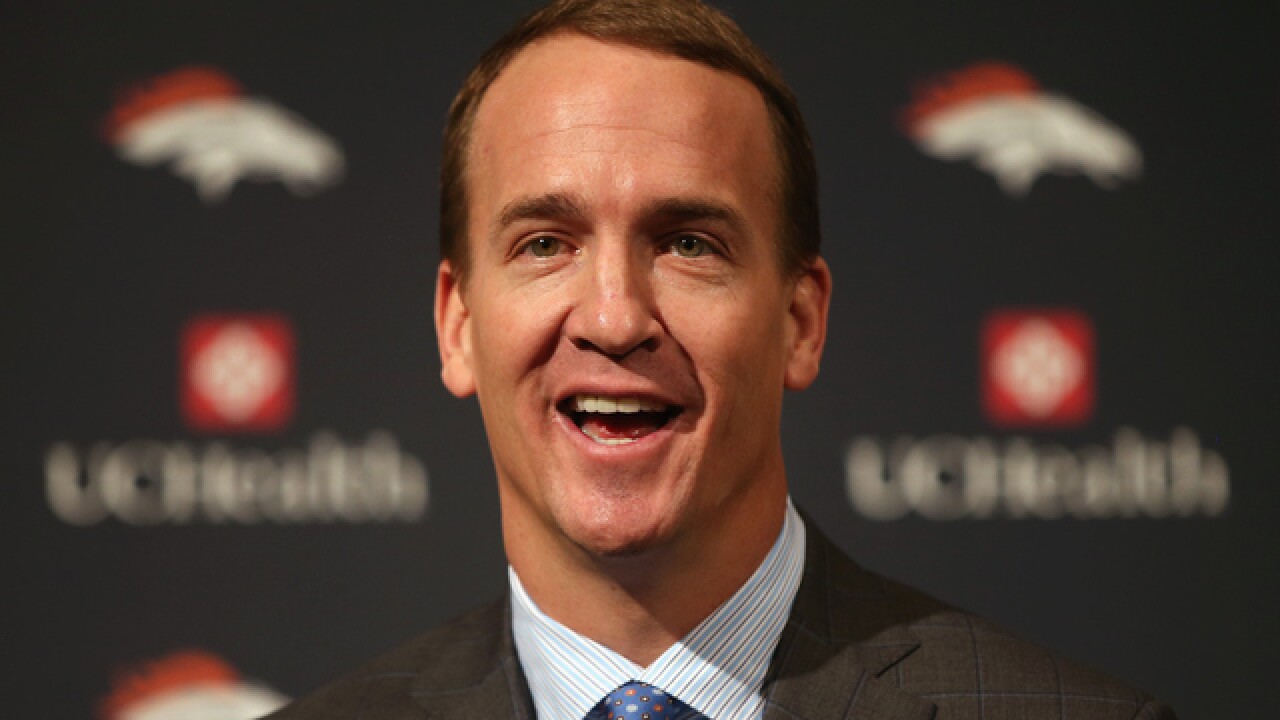 Doug Pensinger
ENGLEWOOD, CO - MARCH 07: Quarterback Peyton Manning addresses the media as he announces his retirement from the NFL at the UCHealth Training Center on March 7, 2016 in Englewood, Colorado. Manning, who played for both the Indianapolis Colts and Denver Broncos in a career which spanned 18 years, is the NFL's all-time leader in passing touchdowns (539), passing yards (71,940) and tied for regular season QB wins (186). Manning played his final game last month as the winning quarterback in Super Bowl 50 in which the Broncos defeated the Carolina Panthers, earning Manning his second Super Bowl title. (Photo by Doug Pensinger/Getty Images) Now former Denver Broncos quarterback Peyton Manning bid farewell to his team and the game he loves on Monday. He fought back tears and he reflected on his family and his career. Read the entire speech below:

"In my very first NFL game, I completed my first pass to Hall of Fame running back Marshall Faulk. I threw a touchdown in that same game to Marvin Harrison, who would be inducted into the Hall of Fame this August.

"The quarterback for our opponent, the Miami Dolphins, was, after my dad, my favorite player -- Hall of Famer Dan Marino, who on the first third down of the game completed a 25-yard skinny post. And it was the damndest throw I’d ever seen.

"Later, I completed a pass to tight end Marcus Pollard down the middle and somebody hit me really hard and after I got up I told myself, 'I know I can play in this league.'

Archie Manning: Peyton's retirement a 'great day for our family'

"Later in that struggling season, we played in and lost to Baltimore. It was the first time that the Colts had returned to Baltimore since they had moved back in 1984. We didn’t exactly get a warm reception that day. The fans were screaming at me and I kept thinking, 'Hey, I was only 8 years old then, get off of my back.'

"I had met him once before but when the game was over I had the chance to shake Johnny Unitas’ hand. He told me, 'Peyton, you stay at it. I’m pulling for you.'

"There is just something about 18 years. Eighteen is a good number and today I retire from pro football.

"Almost 19 years ago to the day, I announced my decision to forgo the draft and stay at the University of Tennessee for my senior year. It was one of the smartest decisions I’ve ever made. I cherished my time in Knoxville, especially my senior year. And I want Vols fans everywhere to know the unique role that you’ve played in my life.

"Thank you to the Indianapolis Colts organization and all the fans across this country. You can’t fathom how much I enjoyed my 14 years there or the warmth that my family feels for you. I’d be wrong not to mention Jim Irsay, Bill Polian, some great coaches, support staff and a host of wonderful Colts teammates, many of whom will be lifelong friends.

"When I was drafted by the Colts, Indianapolis was a basketball and a car racing town but it didn’t take long for the Colts to convert the city and state of Indiana into football evangelists.

"We ended my rookie season 3-13 and in the process I set the NFL rookie record for interceptions, a record that I still hold today. Every year I pull for a rookie quarterback to break that record. Andrew Luck, Matthew Stafford, Eli Manning, Cam Newton. I still kid Eli that he would have broken it if he would have started all 16 games.

"In the beginning of my time in Indy, the team’s struggles were agonizing. My grandfather would call me weekly to ask if his favorite announcers, John Madden and Pat Summerall, would be broadcasting our game. 'Paw Paw,' I’d say, 'we’re only 2-8 right now. We’re playing the 3-7 Bengals. Madden and Summerall don’t broadcast those kinds of games.'

"Fast-forward to my second year when we had gotten things going a little bit. We were playing the Dallas Cowboys and Troy Aikman and Emmitt Smith, Michael Irvin and Deion Sanders. I called Paw Paw: 'Guess what, Madden and Summerall are broadcasting the game.” He said, “I can’t believe it.'

"He was elated and he was very proud and we beat the Cowboys that week and we let the world know that the Colts had arrived. Make no mistake about it, we were coming and we went on to do some phenomenal things like winning at least 12 games seven years in a row and of course winning Super Bowl XLI. And I was truly honored and proud to be a part of it.

"When I visited Denver four years ago, if John Elway had sat me down and said, 'Peyton, here’s what we’re going to do. We’re going to win over 50 games, win four straight division championships, lose only three division games in four years and none will be on the road, we’ll beat the Patriots in two championship games and you’re going to win NFL Comeback Player of the Year, another MVP, your offense will set single-season passing records, you’ll break a couple more all-time records, and we’ll go to a couple of Super Bowls.' I think I would have taken that deal.

"John, you did tell me that, didn’t you?

"Grateful is the word that comes to my mind when thinking of the Denver Broncos. I want to thank Pat Bowlen and his family, Joe Ellis, John Elway, John Fox, Gary Kubiak and their staffs and all the support people in this great organization.

"To all of my Denver teammates, thank you for what you’ve done for this old quarterback. And of course my gratitude to the Broncos fans everywhere.

"While I’ve obviously changed teams, I’ve had the same football representation for almost two decades. I owe Tom Condon many thanks. He has represented me with class at every juncture and he’ll always be a great friend.

"I want to thank a tremendous group of friends who have supported my football career and been at my side at games from high school to Tennessee, Indy and through that incredible Broncos’ Super Bowl win last month. You know who you are and what you mean to me.

"There is no way to measure or properly express what a family like mine can mean. Mom, Dad, Cooper, Eli, extended family, you are the best. Ashley, your support is as potent a motivator as any man can have.

"Ashley's and my kids, Marshall and Mosley, have only been around for a couple of years but they have changed my life forever. A week before the Super Bowl our daughter Mosley asked me, 'Daddy, is this the last game?'
'Yes, Mosley, it’s the last game of the season.'
'I sure do want you to win that trophy.'
'I do, too, Mosley. And that’s what we’re going to try to do.'

"Then she asked, 'Daddy, is this the last game ever?' And that’s just when I shook my head in amazement because I was thinking, 'Mort and Adam Schefter had gotten to my 5-year-old daughter to cultivate a new source.'

"When someone thoroughly exhausts an experience they can’t help but revere it. I revere football. I love the game. So you don’t have to wonder if I’ll miss it. Absolutely. Absolutely I will. Our children are small now, but as they grow up, we’re going to teach them to enjoy the little things in life because one day they will look back and discover that those really were the big things.

"So here are the seemingly little things that when I look into my rearview mirror, have grown much bigger.

"I’m going to miss a steak dinner at St. Elmo's in Indianapolis after a win. My battles with players named Lynch, Lewis, Thomas, Bruschi, Fletcher, Dawkins, Seau, Urlacher, Polamalu, Harrison, Woodson and Reed. And with coaches like Fisher, Ryan, Belichick, Kiffin, Phillips, Rivera, LeBeau, Crennel, Capers, Lewis, the late Jim Johnson, and so many more. I always felt like I was playing against that middle linebacker or that safety or that defensive coach.

"I’ll miss figuring out blitzes with Jeff Saturday. Reggie sitting on top of the bench next to me. Perfecting a fake handoff to Edgerrin James. I’ll miss Demaryius Thomas telling me that he loved me and thanking me for coming to Denver after every touchdown I threw to him.

"I’ll miss putting in a play with Tom Moore and Adam Gase that ends in a touchdown on Sunday. On Fridays I’ll miss picking out the game balls with my equipment guys. Talking football with the broadcast crews and afterwards I’ll miss recapping the game with my dad. And checking to see if the Giants won and calling Eli as we’re both on our team buses.

"I’ll miss that handshake with Tom Brady and I’ll miss the plane rides after a big win with 53 teammates standing in the aisles, laughing and celebrating during the whole flight. I’ll miss playing in front of so many great fans both at home and on the road. I’ll even miss the Patriots fans in Foxborough, and they should miss me because they sure did get a lot of wins off of me.

"And this is important, football fans everywhere need to know how much they mean to me over the years. Fans, you’re at the core of what makes this game remarkable. I’ve received more letters from you than I can count. Fan letters that have touched me, made me think, laugh and moved me to act.

"I’ve learned a lot through my mistakes, stumbles and losses in football. I’ve also learned this game is a mighty platform that has given me a voice that can echo well beyond the game. Football has taught me not to be led by obstructions and setbacks but instead to be led by dreams. Due to some good genes, I’m smart enough to know that those lessons can enrich who I am and where I go from here.

"I’m totally convinced that the end of my football career is just the beginning of something I haven’t even discovered yet. Life is not shrinking for me, it’s morphing into a whole new world of possibilities.

"Pundits will speculate that my effort and drive over the past 18 years were about mastery and working to master every aspect of the NFL game. Well, don’t believe them. Because every moment, every drop of sweat, every bleary-eyed night of preparation, every note I took and every frame of film I watched was about one thing, reverence for this game.

"When I look back on my NFL career, I’ll know without a doubt that I gave everything I had to help my teams walk away with a win. There were other players who were more talented but there was no one could out-prepare me and because of that I have no regrets.

"There’s a scripture reading, 2 Timothy 4:7: I have fought the good fight and I have finished the race. I have kept the faith.

"Well, I’ve fought a good fight. I’ve finished my football race and after 18 years, it’s time. God bless all of you and God bless football."

Peyton ends speech with 'Omaha'; This is why he says it