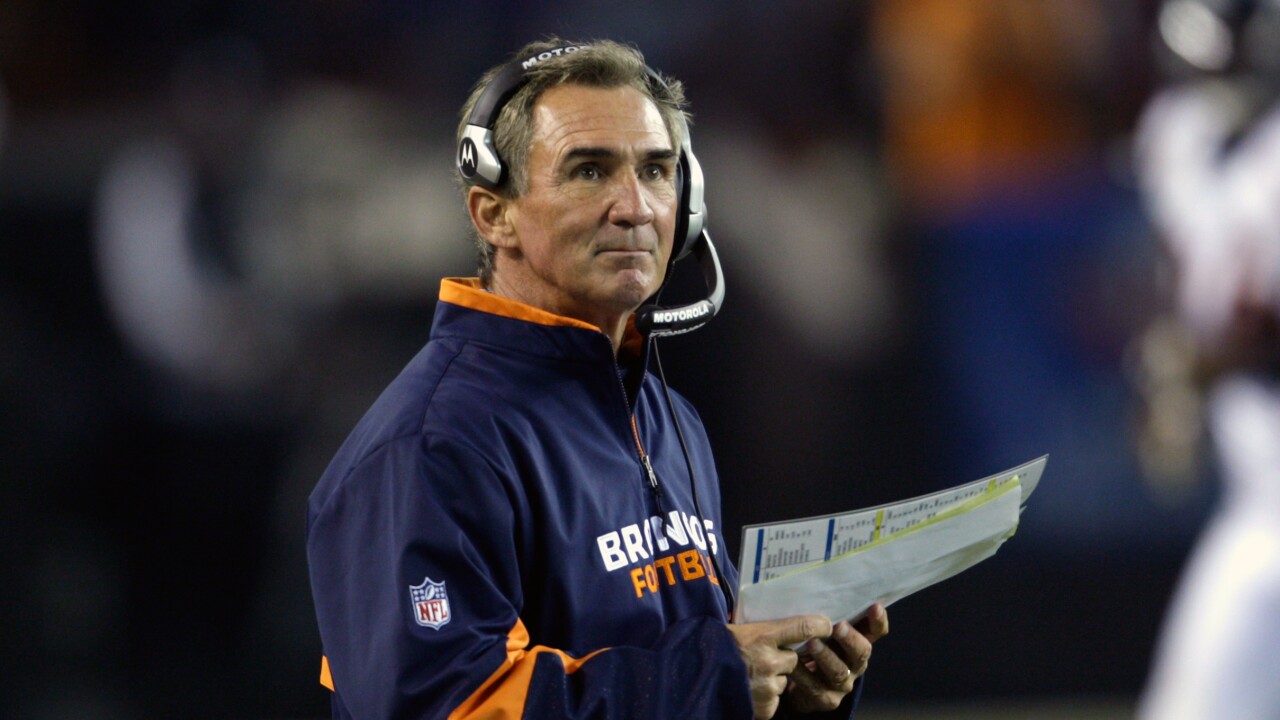 DENVER — The man who brought championships to Denver will take his place among the team’s legends.

Mike Shanahan, who led the Broncos to Super Bowl titles in back-to-back seasons, has been inducted into the franchise’s Ring of Fame, the team announced Tuesday.

Due the COVID-19 pandemic, Shanahan will be officially inducted during the 2021 season. He joins former coaches Dan Reeves and Red Miller in the Ring of Fame.

Shanahan changed the legacies and the impression of the organization when he returned as the head coach in 1995.

Over 14 seasons, Shanahan posted a 138-86 record, including an 8-5 mark in the postseason. He will forever be remembered for bringing the first title to Denver. Always a bridesmaid, everything changed when the Broncos upset the heavily-favored Green Bay Packers in Super Bowl XXXII. That game continues to echo in Broncos lore. Not only did it reward owner Pat Bowlen for his tireless commitment to the franchise, it made quarterback John Elway a champion.

"I am happy for coach Shanahan. It's so well-deserved. Broncos Country will never forget he did for Denver and for the state of Colorado," said Pro Football Hall of Famer and current TV star Shannon Sharpe. "When you played for him, you either got better or you weren't there anymore. He demanded perfection. He knew the right mix on when to push you and when to let the guys be guys. He helped so many players reach their potential. Before he got to Denver, we would hope to win. After he got there, we expected to win."

A year later in Super Bowl XXXIII, the Broncos trounced the Falcons, making the two-season run the most dominant in franchise history. Shanahan was renowned for his offensive brilliance. He had a knack for creating mismatches, and he found many to exploit with future Hall of Famers Elway, Sharpe and Terrell Davis. In 1997 and 1998, the Broncos won 33 games, including 18 straight bridging two seasons. They also set a league record with seven consecutive playoff wins.

"The standard was set. It was set by (owner) Mr. (Pat) Bowlen and carried out by Mike Shanahan to make sure we were competitive and that we were a championship contender every year. He made that come to fruition," former Broncos Pro Bowl guard Mark Schlereth told Denver7. "He brought the first championship here. There was a standard that was set by Mike Shanahan, and he made sure every player adhered to it. That was what he represented. He was such a great coach."

Shanahan called his induction into the Ring of Fame a “tremendous honor.”

“To spend 21 years with a first-class organization that is all about winning was special. It was a great run.”

“When you reflect on the things we were able to accomplish as a team, it starts with the players, coaches and staff who helped us get there. I am grateful for all those relationships and how we all worked together for one goal: to win championships,” Shanahan said in a statement. “To spend 21 years with a first-class organization that is all about winning was special. It was a great run. I am thankful for Pat Bowlen—the best owner in sports—for giving me the opportunity. It was a privilege to coach for the Broncos with such incredible support from the Denver community and all the fans. I am proud to share this Ring of Fame honor with everyone who helped make it happen.”

Shanahan taught players the value of preparation and competing to win every day. It reflected in the results as the Broncos attacked opponents’ weaknesses better than anyone in the league for years, drawing the praise of everyone from Bill Walsh to commissioner Paul Tagliabue.

Shanahan finished his coaching career in Washington, unable to rekindle the same success.

Elway nearly hired his former coach to take over for Vance Joseph for the 2018 season, but the plan fizzled when others wanted a more exhaustive search. However, after years of being away from the team, that began the thawing. Shanahan returned to training camp for the first time at the invite of new coach Vic Fangio. It paved the way for Shanahan to return to the organization and to receive the long overdue honor of Ring of Fame status.

"It's so well-deserved," Hall of Fame safety Steve Atwater said. "What I remember is him always playing the players who deserved to play. He didn't play guys because they were his friends. It was like, you have to go out and earn it. And just the way he treated us. He treated us like men. We knew if we played well, we would win."