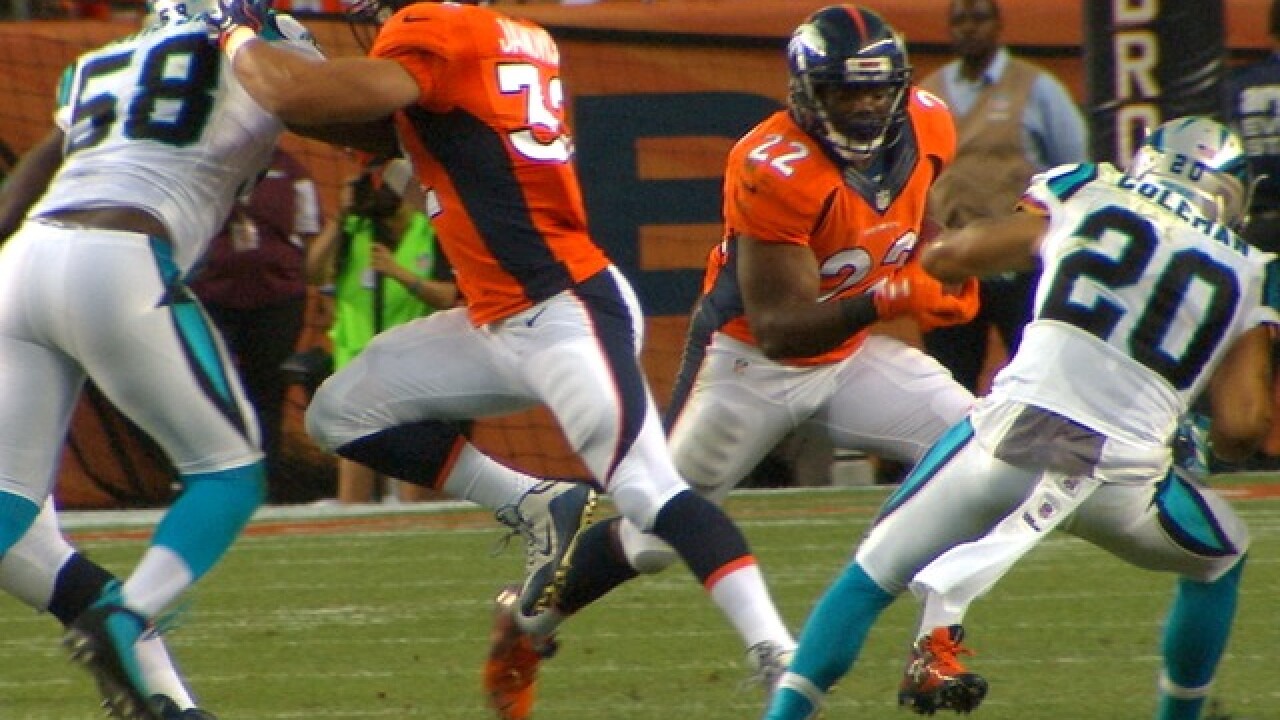 DENVER -- In remaking their offense, the Broncos took a notable risk.

They released running back C.J. Anderson, a stabilizing force last year as he rushed for a career-high 1,007 yards. It was, at its root, a cost-cutting measure. Anderson was due $4.5 million this season, but could be cut without any dead cap money. It left Anderson vulnerable as the Broncos looked to go younger and create playing time for Devontae Booker and recently-drafted Royce Freeman.

Anderson promised Denver7 he would land on his feet. After fielding interest from multiple suitors, Anderson signed a one-year deal with the Carolina Panthers on Monday.

He gives the Panthers a between-the-tackles brute to replace Jonathan Stewart, who was cut in February. He will serve as a complement to the slippery Christian McCaffrey, who emerged as a dependable receiving threat as a rookie, catching 80 passes for 651 yards and five touchdowns.

The Panthers know Anderson well. He played one of his best games in Denver's Super Bowl 50 victory, rushing for 90 yards on 23 carries with a touchdown.

Anderson's departure leaves a void. He was a leader in the locker room, and respected for his effort on game day. He also brought an encyclopedic knowledge of defenses, leaving him valuable in pass protection.

His exit places onus on Devontae Booker to improve. The Broncos thought highly enough of Booker this time a year ago they believed he could beat out Anderson. However, a wrist injury left Booker a spectator during training camp. Booker has rushed 253 times for 911 yards in his career. It brings hope, but also concern -- 3.6 yards per carry does not scare anyone. Booker must prove he can break tackles at the line of scrimmage to take the next step forward. Booker, though, has shown proficiency as a receiver, hauling in 61 passes for 540 yards.

The addition of Freeman remains curious, with the idea of him starting at some point this season hardly far-fetched. Freeman logged 5,621 yards at Oregon on 947 attempts. He scored 60 touchdowns. General manager John Elway said he views Freeman as a potential faster version of Anderson. Freeman brings a physical style. He is a propane tank with legs, listed at 6-foot, 229 pounds.

Ron Leary, who is expected to move back to left guard, told Denver7 last week the Broncos are using a more physical blocking scheme following coaching changes. Of course, there will be outside zone reads -- every team uses them -- but this is a team that wants to impose its will at the line of scrimmage. The Broncos produced 4.05 yards per carry last season, ranking 18th, and 115.3 yards per game, good enough for 12th overall.

The ability to run when they want to, not when they have to, would open up a myriad of possibilities for new Broncos quarterback Case Keenum. Keenum excelled in Minnesota last season, a team that leaned heavily on its ground attack. The Vikings averaged 122.3 yards per game, seventh overall, and rushed 31 times per week, second only to the Jacksonville Jaguars. It provides hint of how the Broncos believe they can maximize Keenum. Run well, run often, and let Keenum produce big plays with mobility and less obvious passing situations.