C.J. Anderson on improving ground attack: 'We have to make them call runs more' 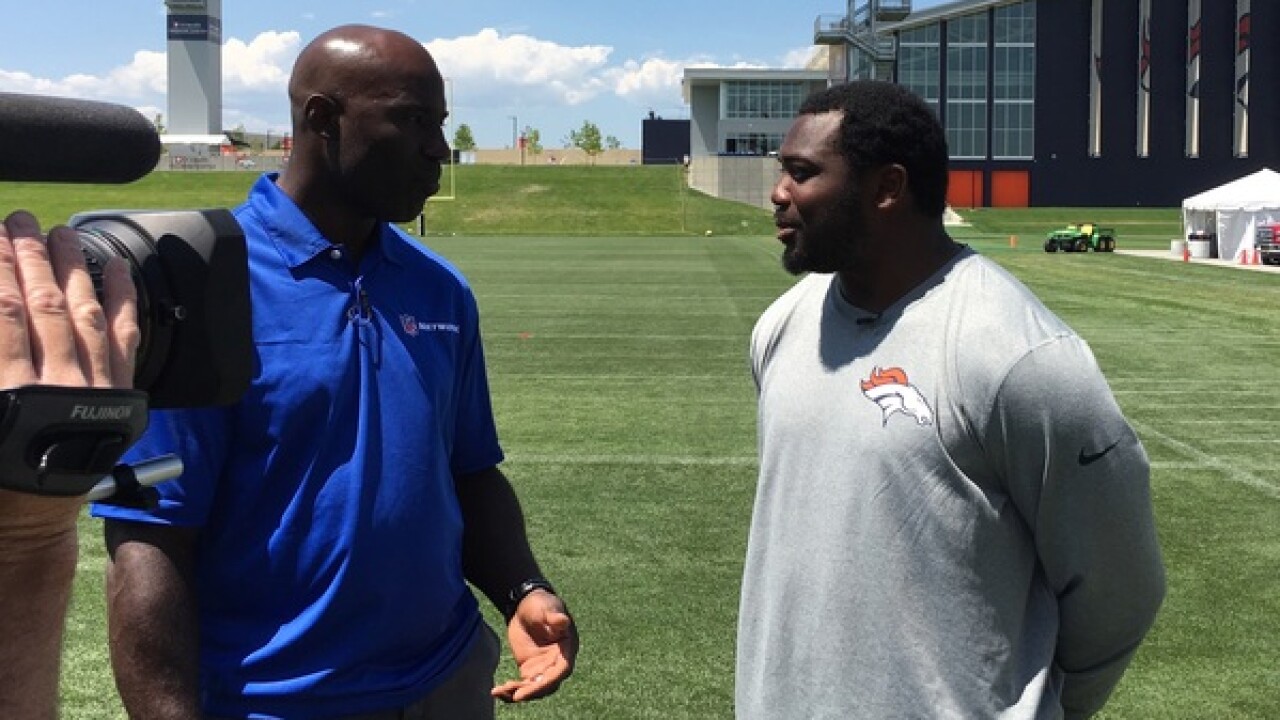 CENTENNIAL, Colo. -- C.J. Anderson refuses to run from a challenge. He stood next to NFL Network's Terrell Davis on Monday and nodded as the numbers rose. Can Anderson reach 300 carries? Can he pile up 1,500 yards? Anderson listened, never disagreeing with the most important running back in Broncos history. Anderson won't reveal his personal goals, but they are "extremely high."

"In our room, we have to make them call runs more. There were times last year for whatever reasons, where me and Ronnie (Hillman) split carries 15 to 15 then we’d split carries two and two the next game," Anderson said. "This year we want them to rely on us. We want to take that next step, take it to that next level to contribute to the team."

Too young. Too big. Too hurt. None are issues anymore for Anderson. He strode into Broncos training camp in the right place at the right time to deliver a career season. This is the year, he insists, halves will become whole. Over the last two seasons, he proved ordinary in the first eight games -- 105 carries, 397 yards, 3.8 yards per carry. In the second half, he morphed into an all pro --  226 carries, 1,172 yards, 12 touchdowns and 5.2 yards per attempt.

The Broncos believed in Anderson enough to match the Miami Dolphin's four-year, $18-million offer sheet in the spring. He has responded to the money and new status with dedication and focus. Anderson arrived in camp at 217 pounds, roughly 10 pounds lighter than a year ago and noticeably quicker. Anderson needs to carry weight for his bowling ball style, but can't be too heavy where he loses his ability to break tackles. When the Broncos left OTAs in June, Anderson headed to Houston for training that continues to pay dividends in training camp.

"I just worked on conditioning. I did a lot of stadium steps, a lot of hill sprints. I did a whole lot. I have had success before in college putting myself in position to be ready to carry the load," Anderson said. "That’s the mentality and the mindset I have. Now I am just trying to get where E (coach Eric Studesville) can look at me and say, 'He’s gone four straight plays. He can go one more and be fine.'^"

Anderson, 25, relishes the role of the bellcow back. Coach Gary Kubiak believes he's ready to be "an every down guy." Anderson has never carried more than 179 times in a season, but is preparing for a larger chunk, receiving a push in practice from rookie Devontae Booker, who continues to receive second-team reps, and Hillman, last season's leading rusher. When asked to do more, Anderson has responded throughout his career, most notably in the Super Bowl 50 victory when he pin-balled for 90 yards and a bruising touchdown.

"I think C.J.'s definitely lost  a lot of weight. He's trimmer," cornerback Chris Harris said. "I just go by what I see out here on the field and if he's breaking tackles come the first game I will know that's C.J."

Anderson's optimism about a fast start goes beyond his physique. He remains in a better place mentally, learning to lead in the absence of a returning quarterback while growing more comfortable in the offense. Like Kubiak, Anderson believes the offensive line will be strong. Left tackle Russell Okung and right tackle Donald Stephenson have already impressed teammates with their knowledge and fit in the zone blocking offense.

"As a group, they are better. As running backs we are better when it comes to attacking angles. I know what my head coach wants and what my position coach wants," said Anderson, who battled ankle and toe injuries early last season. "They key for me is attacking from the first game. No easing into the season. That was on me, and what I see when I watch film. Week one, I have to be ready from jump. I need to show them I am ready, that I want more and to keep giving me the ball."

The Broncos return to practice on Wednesday after getting Tuesday off. It will be a day to keep an eye on the depth chart since coaches use the break to evaluate film. ... The Broncos signed defensive lineman Lars Koht and waived Shaneil Jenkins.