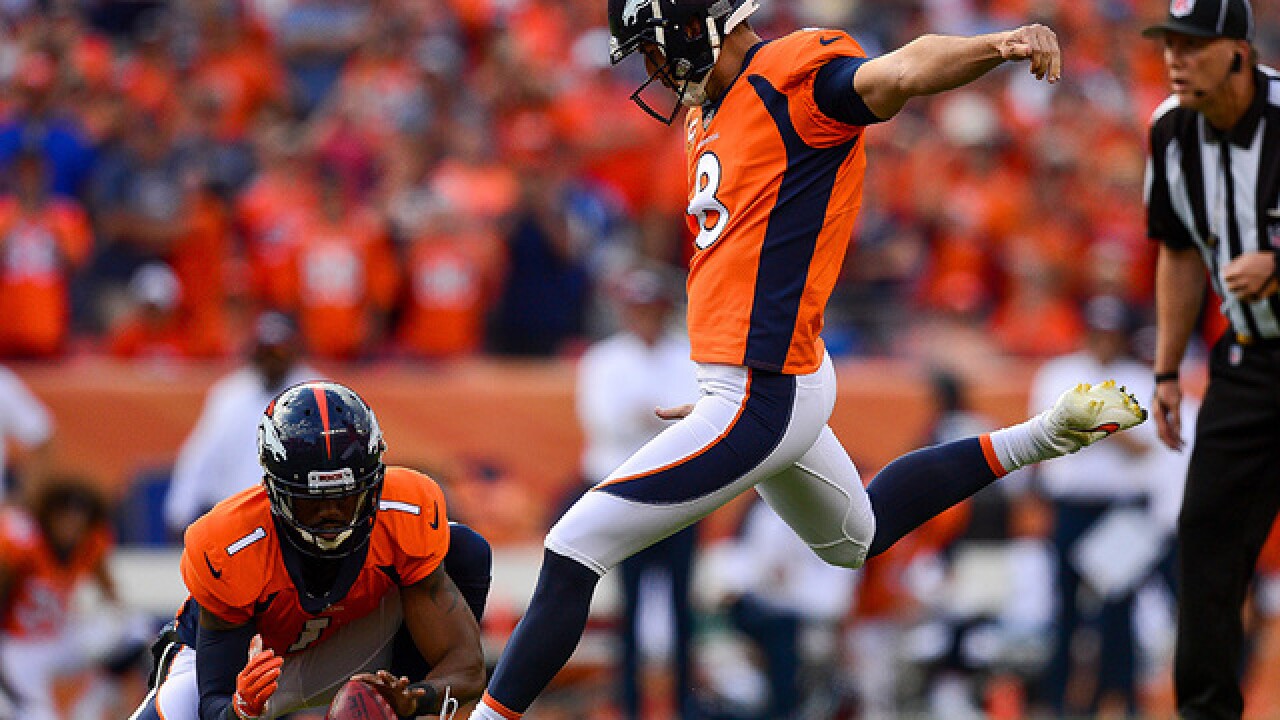 Copyright 2018 Scripps Media, Inc. All rights reserved. This material may not be published, broadcast, rewritten, or redistributed.
Dustin Bradford
<p>DENVER, CO - SEPTEMBER 16: Kicker Brandon McManus #8 of the Denver Broncos kicks a game-winning field goal to put the Denver Broncos ahead 20-19 in the fourth quarter of a game against the Oakland Raiders at Broncos Stadium at Mile High on September 16, 2018 in Denver, Colorado. Punter Marquette King #1 is pictured holding. (Photo by Dustin Bradford/Getty Images)</p>

DENVER -- In Case Keenum's last words at the podium, he discussed "fighting."

Fighting carries several meanings. But for a team trying to distance itself from a forgettable 2017, the scope narrows. For the Broncos to remain relevant, they must punch back. Twice in the first two weeks, they found themselves trailing in the fourth quarter. Sunday, they heard boos, clumped through the first 30 minutes and were mesmerized by Derek Carr's accuracy.

Yet, when it mattered most, the Broncos played their best, overcoming a 12-point halftime deficit for the 10th time in franchise history. The small sample size makes it impossible to know if the Broncos are legitimate contenders, but one thing remains clear: they compete. They mocked adversity for the second straight Sunday -- this time in a home record 92-degree heat -- as they rallied for a gutsy 20-19 victory over the rival Oakland Raiders.

"Anytime you have a winning drive in the fourth quarter, it feels awesome," said Keenum, who completed 19 of 35 passes for 222 yards. "Wins like that, we weren't playing well, and to come out and play like we did, it was big. We had huge stops. We just kept fighting."

Keenum led a game-winning 62-yard drive in the last two minutes. He hit rookie receiver Tim Patrick with a clutch 26-yard catch and run to set up a 36-yard field goal by Brandon McManus.

"I am living the dream," said Patrick, an undrafted free agent who made the roster as a fifth receiver because of his special teams acumen in training camp. "Football is always on my mind every day. I am always dreaming of ways I can contribute. This meant a lot."

McManus nailed the field goal with six seconds remaining -- it was dangerously right -- and as the Broncos remain undefeated entering their first road game next Sunday at Baltimore.

"Every week is different. Every team has guys who can make plays," cornerback Chris Harris Jr. said. "These AFC West games are always up in the air. We just want to get that mind control back. And we started if off today."

This is what a season hanging in the balance looks like: Early fourth quarter, fourth down, crowd at full throat, and the scoreboard ridiculing the home team. The Broncos' retina-burning first half left them in need of a stop sign. Derek Carr, who finished 29 of 32 for 288 yards and one touchdown, finally looked uncomfortable. Linebacker Todd Davis chased him out of the pocket, leading to a rare misfire.

The Broncos took over and plodded 67 plays on 14 plays. Phillip Lindsay triggered the movement, pushing the ball to the 1-yard line before a sneaky (Case) Keenum Keeper. With an empty backfield and the Raiders spread out, Keenum took the shotgun snap and burrowed his way into the end zone, slicing Oakland's lead to 19-17 with 5:58 remaining. A final defensive stand set up Keenum's latest fourth quarter comeback.

Not only has Lindsay made a difference, he has made history. He represents the first undrafted free agent in the NFL to eclipse 100 yards from scrimmage in his first two games.

"It's a credit to the offensive line. They were getting a body on a body," Lindsay said as he walked out of the locker room after rushing for 107 yards on 14 carries. "I was just following their lead."

Denver delivered an awkward first half that drew jeers and brought reminders of last season's dumpster fire. There is no shame in trailing at half. However, the Raiders boxed the Broncos' ears. The numbers were jarring: Oakland posted 12 first downs and 202 yards. The Broncos countered with two first downs and 112 yards. Denver opened with three straight three-and-out drives after avoiding the indignity in 14 possessions against Seattle.

"We felt like our timing was just a tick off," Keenum insisted. "At halftime, we talked about how the floodgates were about to open."

The Raiders muted the sun-bleached crowd with an impressive opening march. Oakland moved 67 yards on seven plays, finding mismatches with receivers and casting the Broncos into confusion. Denver drew a 12-men on the field penalty and burned a time out on third-and-goal with late substitutions. The Broncos held Oakland to Mike Nugent's 26-yard field goal, leaving Denver down 3-0 with 9:33 remaining in the first.

The drive captured the opening 30 minutes. Oakland bullied its way down the field, while the Broncos responded clumsily. The Broncos finished the first quarter without a first down, collecting 23 yards.

Trailing 6-0, the Broncos offense awoke from its Ambien snooze. Lindsay proved a catalytic force, bumping outside for a 53-yard gain to the 22-yard line. It set up a tease. On third down, Keenum made a bad read and worse throw, lofting a ball short of Jake Butt that Rashaan Melvin intercepted and returned the 16-yard line. The mistake swelled in importance as the day advanced.

"It was an idiotic mistake," Keenum said.

On the fifth drive, the sellout crowd's patience expired. The Raiders sacked Keenum on third down. During last season's 5-11 collapse, Denver reached nadir milestones. The Broncos were shutout for the first time since 1992 in a loss at the Chargers.

Many issues stained last season. The inability to make halftime adjustments ranked prominently. The Broncos offense responded with a caffeinated approach on its third quarter opening drive. Denver moved 75 yards on 11 plays, leaning on Lindsay and culminating with a one-yard plunge by Royce Freeman behind fullback Andy Janovich's block. It shaved the deficit to 12-7, and reintroduced vigor from the fans.

It proved short lived. Carr continued his impression of Phil Simms in his Super Bowl XXI dissection of Denver. He completed 21 of his first 22 passes, connecting with Seth Roberts for an easy score as Chris Harris and Justin Simmons collided. Carr spent the afternoon stalking Ken Stabler's 1975 record for completion percentage in a game. He picked on third corners Adam Jones and Tramaine Brock as Amari Cooper caught 10 passes for 116 yards.

"He was good, but he had less time in the second half," nose guard Domata Peko said, who avoided a concussion after suffering a helmet-to-helmet hit in the first half on a nullified fumble recovery. "These are the kind of wins you love. We had to grind it out."

"You know the special thing about this team," outside linebacker Von Miller said, "is we're all one."

In the end, the Broncos defense showed elasticity and tenacity. They gave up yards -- something Harris admitted is foreign territory -- but tempered points. Denver sits undefeated.

Sometimes you don't draw a smile on Mona Lisa. The art is left up to interpretation, and some victories are simply easier to appreciate than explain.

"It wasn't about one person. We kept plugging along. It's a testament to the hard work we put in. When you put in an a lot in the investment in the offseason and training camp, you to pull from it when the pressure is on," Keenum said. "We showed grit. We fought. It's pretty special."

The Broncos can insist that Lindsay is not the starter, that they are riding the hot hand. The truth remains clear. He's been their best running back through two weeks. He eclipsed 100 yards rushing in the fourth quarter. ...  Shaq Barrett is no stranger to blocking kicks. He got his paw on Nugent's extra point in the first half that proved the difference in the game. "I was able to come around free. The other guys got the eyes of (the defenders), and I was free." ... In their haste to neutralize Jared Cook, the Broncos were victimized by Amari Cooper. Matched up against third corners Tramaine Brock and Adam Jones, Cooper reached 10 catches and eclipsed the 100-yard receiving mark in the third quarter. ...  The Broncos lost starting right tackle Jared Veldheer to a concussion. Billy Turner replaced him. ... Chris Harris and Justin Simmons were evaluated for concussions, but returned. ...  Broncos captains, based on performance, were: Derek Wolfe, Brandon McManus, Case Keenum and Matt Paradis. ... No surprises in the inactive list. It mirrored last week's list save for Isaiah McKenzie, who was cut and moved to practice squad. The seven sidelined: quarterback Kevin Hogan, cornerback Isaac Yaidom, guard Sam Jones, safety Shamarko Thomas, defensive tackle DeMarcus Walker, linebacker Alexander Johnson, tackle Elijah Wilkinson. ... Walker beat out Clinton McDonald for a final roster. The Raiders signed McDonald this week following a spate of injuries and he played. ... Denver responded to Oakland's initial scoring drive with its first three-and-out of the season. ... A Von Miller sack and strip was negated in the first quarter when Todd Davis was flagged for holding. "Todd Davis probably owes me more than a steak dinner. I've got to talk to him. Why does he owe me a dinner? Did you watch the game? I had Derek Carr. It was one of the few plays that he held the ball. We recovered the ball, then we had to go back because Todd was doing these walks with whoever it was. It's all good. That's my brother." ... Sunday marked the first time since 2007 the Broncos have produced fourth quarter rallies in their first two games. ... Punter Marquette King tweeted out a video of him staring at a Chucky doll (an apparent ode to Raiders coach Jon Gruden) with money taped to it. What it meant? That's for the viewer to decide. But clearly King had feelings for the game, despite denying them all week. ... Gruden on Carr's day, "He did well. He did what we asked him to do. I think he could have completed every pass."